Since beginning this Demystifying Crowley series other efforts along similar lines have been brought to my attention.  First of all, many thanks to fellow blogger Dedroidify for publishing an unknown to me article by Robert Anton Wilson on the Qabala, which he spells Cabala.

Some salient points from it:

To the Cabalist, the whole universe is a network of meaningful connections. The seemingly coincidental is as full of meaning as anything else. To begin thinking like a Cabalist you must regard everything as being just as important as everything else. All that seems "accidental," "meaningless," "chaotic," "weird," "nonsensical;' et cetera is as significant as what seems lawful, orderly and comprehensible.


An elementary Cabalistic training technique is to try every day to "regard every incident and event as a direct communication between God and your soul." Even the license plates on passing cars are such communications-or can be considered as such-by the devout Cabalist. ...

Cabala, like dope, is a deliberate attempt to overthrow the linear left brain and allow the contents of the holistic right brain to flood the field of consciousness. When you are walking down the street and every license plate seems part of one continuous message-one endless narrative-you are thinking like a very advanced theoretical Cabalist. (Or else you're stoned out of your gourd.) Practical Cabala (or Cabalistic magic) is the art of utilizing such holistic perception to create effects that will seem like "strange accidents" to the non-Cabalist. ...

The system of Cabala is contained in a kind of ontological periodic table of elements (see illustration). The purpose of this diagram has been nicely defined by the eminent contemporary Cabalist (and Jungian psychologist) Dr. Israel Regardie, who describes it as "a mnemonic system of psychology. . . to train the Will and Imagination." 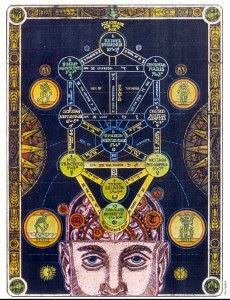 I recommend highly reading the whole piece.  In some ways it's the essay on Qabala that I wish I could have produced.  Much appreciation to Dedroidify for bringing this gem to light.

What Wilson calls "an elementary Cabalistic training technique" comes from a Crowley exercise in one of the advanced grades of his system.  This illustrates the open source code nature of Crowley's school and its nonlinear nature.

I sometimes modify this to treating every incident as a communication between the School and my Soul.  Remember, you don't have to believe in God, the School, or a Soul to make use of this metaphor and practice the exercise.  At the very least you'll be enlarging your consciousness through looking at things in a new way.

If the communication indicates or suggests some kind of action to be taken, then I will find ways to either verify or refute the communication often with an oracular device of some kind.  Usually I won't take action until getting it verified two or three times unless it's something I planned to do anyway.  However, the last resort in my decision making process involves listening to the intuition.  I might think I received some sort of communication and have it verified but if it just doesn't feel like the right move, I'll reject or postpone that suggestion.  Sometimes the message looks wrong or inappropriate.  Sometimes, it seems, the School feeds you false information.

I first heard the term guerrilla ontology from reading Robert Anton Wilson.  I don't know if he came up with that term. He describes it as:

"The basic technique of all my books. Ontology is the study of being; the guerrilla approach is to so mix the elements of each book that the reader must decide on each page 'How much of this is real and how much is a put-on?'

Crowley uses the same technique in his writings.  Sometimes you just have to wonder how much of it is a put on.  The point seems to get people to think for themselves, to not rely upon an external authority to feed them all the answers and then blindly follow them.  Gurdjieff also employed a form of guerrilla ontology though not so much in his writings.  Timothy Leary employs fairly hefty doses of it in his autobiography, Flashbacks.

Guerilla ontology appears an often used technique for raising consciousness in this lineage under discussion.  As one acquires refinement and intimacy with the Knowledge and Conversation of the Holy Guardian Angel it may be found that the Angel isn't above a little bullshitting itself all in the name of raising consciousness.  The Angel serves as a Guide and sometimes it may guide by playing tricks.

Ecce exeplum:  In days of yore, as the soundman and roadie for a band called The Tickets, I had just finished setting up the PA for a club performance in Toronto.  This was at the end of a long tour and I felt a mild alteration of consciouness and spaciness from being on the road for an extended period of time.  I grabbed a beer to relax before the show and sat down at one of the tables.  A nearby patron struck up a conversation.  He had the appearance of a heavy metal/biker type.  I noticed occult symbols on his black T-shirt including 666 but didn't pay it any mind figuring it was just part of the look.  Didn't really engage in the conversation but noticed that it drifted into occult subjects.  Everything he was saying made sense but nothing I hadn't heard before.  Then he began talking about bilocation, the phenomena of someone apparently being in two different locations at the same time.  He suggested that at one of the locations, the subject existed as a phantom projection.  Again, I wasn't paying close attention.  I was tired and this sounded quite abstract.  Then he faced me directly in the eye for the first time, gave a very peculiar look and said, "for instance, I might not really be here right now" and laughed quite loudly.

It profoundly shocked and woke me up.  The familiar sense and comfort of consensual reality completely collapsed and my brain felt like it was spinning in some vast chasm of space that had opened up.  It seemed both unnerving and invigorating at the same time.  I can't think of anything else that could have produced the same effect.

While researching for this series I came across a new book by David Shoemaker called Living Thelema, A Practical Guide to Attainment in Aleister Crowley's System of Magick  which I recommend to the serious student looking for practical ways to get started or for different ways of carrying on.  Shoemaker also works as a Jungian therapist and brings that perspective to the book giving it added dimension.  Many similarities and congruencies appear between Jung's approach and Crowley's, a subject for another time.  They seem mutually reciprocal systems, each giving insight into the other.  Living Thelema does assume the reader has some knowledge of Crowley's writings.

Thomas Pynchon's new book, Bleeding Edge, also just came out.  He is a writer who has and uses qabala amongst his bag of literary tricks and devices while writing and invoking multiple levels of meaning.  Early on in Bleeding Edge Pynchon has what I strongly suspect to be references, or hat tips to Crowley:

"The principal, Bruce Winterslow, acknowledging the equinox in a white suit and panama hat, is working the crowd, all of  whom he knows by name and thumbnail bio, patting shoulders, genially attentive, schmoozing or threatening as the need arises. -p.3

The Equinox ( A Review of Scientific Illuminism), of course, is the name of Crowley's main series of writings starting with the biannual periodical, Volume I, he issued from 1909 -1914. Basically, his School in book form.

According to Eric, a purpose on earth written in code none of us can read.  Except maybe for 666, which tends to recur.  Reminds me, you still have that concealed-carry permit?" -p.11

666 was the number Crowley most identified himself with.  In court, he testified that it was 6, a number of the Sun (via Tiphareth) repeated three times, so they could just call him Sonny.

The book is called Bleeding Edge (B.E.) and the lead character is Maxine Tarnow, a most delightful name.  Her father's name is Horst which recalls Horus, Crowley's god of the new Aeon, and "t" which in Hebrew = tau = cross, bringing up the rosy cross by association.  Hors + t, the only letter missing is "u".

It should be said that Pynchon makes a great deal of pop cultural references, mentioning, for instance, Britney Spears and her song Oops, I Did It Again not long after Crowley.  Though I'm only at the start of chapter 11, p.112, I haven't seen any more Crowley references nor do I see an overtly Thelemic form to the book.  That's one element of many in his alchemical stew.  I also enjoy the fact that he puts a great deal of music into his mix.

Pynchon's book, Against the Day has quite a lot of qabala and occult allegories.  I'll be talking about it more later when the subject of Crossing the Abyss comes around on the guitar, but for now I bring it up because in it, Pynchon basically teaches one how to read the qabalistic puns and metaphors by taking the reader through various levels of difficulty from the blatantly obvious - talking directly about qabala and gematria - to the subtle and obscure.  Most of the time, to read the qabala in the other usual suspects, ie Crowley, Wilson, and Joyce, one needs a fairly comprehensive knowledge of the system.  Pynchon prods the reader into looking for new levels.