In this Zen koan-like chapter, Deleuze posits a mode of co-presence of nonsense with sense. Sense doesn't come from the heights or the depths, God or Man, but rather inheres upon the surface, the border between the series of language and the series of bodies or things. Nonsense connects with the paradoxical element, the aleatory point, also called the empty square, that constantly circulates between these two series. Sense gets produced by this circulation of nonsense. Nonsense has no sense, but provides a donation of sense such that nonsense is opposed to the absence of sense.

10th Series of the Ideal Game

The Ideal Game provides a model for talking about thought, events, chance and the two readings of time as known by the Stoics: Chronos - the time of the present, and the Aion, the time of elongated pasts and futures. The Ideal Game has no rules, the rules change with every move, no winners or losers and it affirms and ramifies chance. The Aion is the ideal player of the game. Ordinary games divide an apportion chance. They have rules based on hypotheses.

"The Lottery in Babylon" short story by Jorge Borges affirms the role of chance and also supports the subdivision of time as done in The Aion "The Book," the uncompleted magnum opus by 19th Century symbolist poet Stéphen Mallarmé provides an example of the Aion as the ideal player of the game. A description of it is here. Not in the video but should have been: The Ideal Game can only be played in thought and the only result it can produce is a work of art.

Arcing For to Carry Us Home

"The Vietnam War had been punishing in ways to all Unistaters, but Case, embroiled in the center of it, experienced it as very bad TV. It was like the film had stuck and Moe kept jabbing his finger in Curley's eye, over and over in infinite regress, until the myth and metaphor had turned meaningless through redundance. If the war wasn't that, it was sloppy editing or just plain bad taste."

- Schrödinger's Cat (SC), Robert Anton Wilson, p. 24 - 25
In some ways this essay continues my previous 2020 Maybe Day article, Navigating the Pandemic Lockdown with Literature, Magick and Science published online in New Trajectories_2021 starting on page 40. It continues where the latter left off further exploring the premise that Civilization, as we know or imagine it, continues through a transition known as Crossing the Abyss or what Robert Anton Wilson (RAW; sounds like RA) called Chapel Perilous. This premise turns up in a different way on a recent Hilaritas podcast featuring writer and editor Jesse Walker, hosted by Mike Gathers.
Schrödinger's Cat starts off with a look at Pavlov's dog. It concludes the first small section by asking us domesticated primates to consider the mechanical nature of our behavior though admitting that "[m]ost primates ignored this philosophical challenge." p. 6
It starts with a philosophical challenge.
The very beginning of Schrödinger's Cat states problems of humanity: "They had territorial squabbles and politics and wars and a caste system." p. 5. These problems get attributed to "bugs" which sounds like a metaphor for the dark, destructive side of human nature.  Especially if one looks at the film Men In Black 1 (the title says it all) which has much magickal metaphor in it. A "Bug" in that film takes over a human and proceeds to wreak mayhem and destruction in his quest to steal and control Universal Well-Being, as modeled by a necklace worn by a Cat. One gets a strong sense of this Cat model of Universal Well-Being by really seeing the cover illustration of the Dell omnibus edition. All SC quotes and page citations come from that edition. 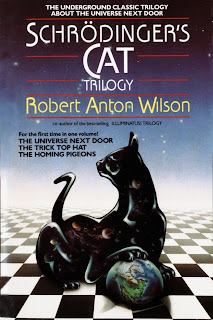 In this series Deleuze sets forth his transcendental field of impersonal, pre-individual singularities, the basis of how things come into existence. Singularities, events and sense appear synonymous terms. Singularities correspond to the heterogenous series which form systems. Potential energy is the energy of the pure event whereas forms of actualization correspond to the realization of the event. Sense haunts the surface. Compares his transcendental field to Lawrence Ferlinghetti's Fourth Person Singular which comes from his poem To the Oracle at Delphi thus alluding to the magical nature of this field.

Deleuze also compares his transcendental field to Nietzsche's Dionysian will to power, power in the sense of the ability to act/create, not political power. Nietzsche made the groundless speak.

Uses the battle as an example of an Event comprised of many smaller events, it's impassability or neutrality. The example of a soldier on the edge of death losing all identity and becoming part of the pure Event. The two moments of sense, impassibility and genesis, or neutrality and productivity.
Ferlinghetti reading To the Oracle at Delphi
Posted by Oz Fritz at 7:43 AM No comments: