Another great one has sprung his mortal coil.  Drummer and composer Ronald Shannon Jackson died two days ago from leukemia at the age of 73.  A master musician, considered an innovator of free jazz drumming and harmolodics, Jackson played in groups with Ornette Coleman, Albert Ayler, Cecil Taylor, James "Blood" Ulmer, as well as forming his own band, The Decoding Society. 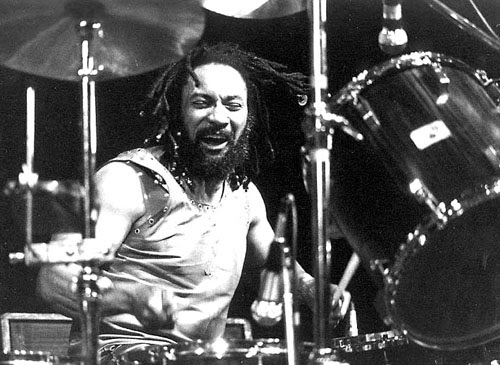 Musician, Player and Listener magazine writers David Breskin and Rafi Zabor called him "the most stately free-jazz drummer in the history of the idiom, a regal and thundering presence."[4]

From the same article, Jeff Eldredge describes the Decoding Society's music as:

Melodies can alternate from busy, frenetic, multiple themes to simple, lazy, lyrical phrases. They often function as both heads and melodic material to accompany one or more soloist. Sometimes the melodies are diatonic, other times they are bluesy; occasionally they sound "Eastern". Although The Decoding Society is more of a composer's band rather than a vehicle for soloing or drumming, free-blowing solos abound, and Jackson's thunderous playing is heavily featured.

I would say his playing was thunderous too... in every meaning of the word.

Shannon also became a founding member of Last Exit with Bill Laswell (bass), Sonny Sharrock (guitar), and Peter Brotzmann (sax) which has been described as a free jazz supergroup.  I would describe them as one of the most, or the most powerful musical force of the XXth Century.  A pillar of raw, unrehearsed sound, guided chaos balancing on the brink of utopia or oblivion.  They sometimes sounded like the last exit before full on nuclear annihilation as if creating the experience in sound would negate the need for it to occur on a global scale.  Their peak years of musical activity, from the mid to late '80s, coincided with the glasnost movement in Russia leading up to the collapse of the Soviet Union and the tearing down of the Berlin Wall.

Shannon practiced Buddhism, alchemy, and magick.  He seemed quite well versed in various esoteric arts.  I had the extreme great fortune to know and work with him - assistant engineer for the recording and mixing of Red Warrior, did live sound for the Decoding Society one time, and traveled with him to India when he accompanied Bill Laswell and I to work with violinist L. Shankar.

Though only in contact with him for a brief time, I do consider Shannon a friend whom I hold tremendous respect for.  He seemed low key and very refined.  Sometimes he appeared to go invisible.  Shannon would wear black leather and his skin was very dark causing his appearance to disappear into the shadows of a darkened control room, yet you knew he was there, sharply alert, listening closely to the sound of his music being mixed.

Jackson's demeanor recalls for me the I Ching's 27th Hexagram which has the trigram Ken - Keeping Still, Mountain above the trigram Chen - The Arousing, Thunder.  The Image for it reads:

At the foot of the mountain, thunder:
The image of PROVIDING NOURISHMENT
Thus the superior man is careful of his words
And temperate in eating and drinking.

The first Shannon Jackson record I helped out on was called Texas, and that's when we met.  It was only the second project I ever worked on with Bill Laswell.  Robert Musso engineered the mix but Bill did all the automation writing of the faders.  It was released by Caravan of Dreams, which released several of Jackson's records in the '80's.  Caravan of Dreams was an experimental theatrical collective lead by writer and teacher John Allen/ aka Johnny Dolphin that would later launch the ambitious Biosphere 2 experiment near Fort Worth, Texas - Ronald Shannon Jackson's home town.

We didn't hang out much in India, a few meals together - he wasn't with us at the studio sessions.  I don't know how he spent his time for the 10 or so days we spent there but he seemed much better for it when we left.  Phantom invisible from another world on a expedition of spirit visiting temples, mosques, residences of saints, holymen, and women ringed with children of all ages; street musicians and smiling beggars; riding tuk tuks in and out of labyrinthine backstreets and alleys looking for ancient Vedic India that still exists in deep hidden locations; cooking fires roasting chickens penetrating the blackness of night.  I don't know, maybe that's what he did?  Flying with him back and forth from Madras, it seemed like Shannon was an essential part of the trip.  He had to be there for some reason, I don't know why? 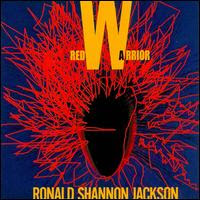 Red Warrior was my favorite Ronald Shannon Jackson album to work on.  It was the most epic.  I think Bill Laswell had more creative input with this one.  It was released on Laswell's Axiom Records label.

Red Warrior was mixed by Jason Corsaro immediately after we mixed  Middle Passage by Ginger Baker.  Two classic drumming based records mixed back to back.  I brought in a few of my books, Gems from the Equinox, Magick in Theory and Practice, The Illuminated Books of William Blake, etc. etc. to help create an ambience, and to give Shannon something to look at while the mix was being set up.

Here is the song Ashes from that album: