Today is the first day of the rest of your mythology.

A crack between the worlds opens up November 10th, 7:30 pm  at the historic Nevada Theater in downtown Nevada City, Ca with a concert by Dalrymple and the Wild Daimons and a special guest to open the show.

The ensemble currently performs several pieces from their forthcoming 2023 album release, We Are Gods.

The album is a musical blueprint born out of the need to align human beings with the personification of their individual destiny, the center of the source of inherited power.

The band took their name from the Greek word for Provider/Divider of destiny/fortune, i.e. The Daimon.

“There was a Daimon in me and in the end its presence proved decisive.” 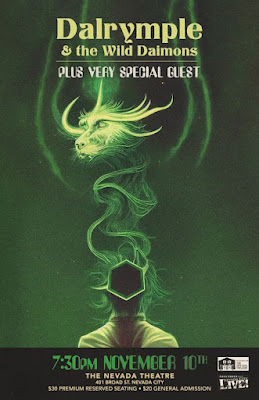 Dalrymple and the Wild Daimons was conceived in the frosty confines of the Dream Factory in the isolated winter of 2020. Part band, part comic book, part conceptual art project, they defy categorization but align with the visionary artists who inspire them, David Bowie, Bahaus, Nick Cave, Carl Orff, Terry Riley, Moondog, Alan Moore and Carl Jung to name a few.

The music of this power trio borders multiple genres and tonal expressions such as neo-classical, gothic-folk, chamber-psych, avant-rock and doomy funk, all charged with cosmic undertones.

On display at their live shows will be the first 9 pages of the bands forthcoming graphic novel, Planet Daimon, written by Dalrymple and illustrated by Sacramento based artist Greycat. The graphic novel is a further extension of Dalrymple and the Wild Daimons mission statement~

“To save as many Daimons as they can from being ignored, repressed and annihilated, using the divine electricity that courses through the cosmic fields of music, art, theatre, magick and the power of active imagination. Today is the first day of the rest of your mythology.”

Get your tickets HERE

For more information or to listen to their new single Blood on the Concrete (mixed and mastered by Yours Truly) go THERE to their website.

20th Series on the Moral Problem in Stoic Philosophy

This chapter concerns the spatio-temporal actualization of the event into a state of affairs. The Stoic master wills the embodiment of the event into a limited present. The Stoic master identifies with the quasi-cause (events causing other events) to will the embodiment of the event. This also becomes the representation of the event. This willing of the event seems a dramatisation with the Stoic master as first, an actor with the pure event in eternal time (the Aion) being the character. Later Deleuze calls the actor a mime. The Stoic master in this role gets compared to a Zen master. Deleuze begins with the example of Diogenes Laertius comparing philosophy to an egg with the shell as Logic, the white as Ethics, and the yolk as Physics but says that Diogenes rationalizes - what we really need is aphorisms/anecdotes or koans. Later he criticizes Plutarch for rationality hostile to Stoic philosophy. Hence this series reads more like a collection of koans than a rational presentation. For example, Deleuze says that Divination grounds Ethics and discusses the fortune-telling art. The dramatisation of the Idea from virtual into actual as discussed in Difference & Repetition p. 216 - 218 (Columbia University Press edition) compares with the dramatisation of the actualization of the event.