Mine is the radiance wherein Ptah floateth over his firmament.
I travel upon high!
I tread upon the firmament of Nu!
I raise a flashing flame from the lightening of mine eye,
ever rushing onward in the splendor of the daily glorified Ra,
giving my life to the dwellers on Earth.


The mood and ambience of ancient Egypt paid a visit to Northern California when  Soul Train  Lady of Soul Award winners Les Nubians touched down at the Kanaga System Krush media center and farm.  They had either just finished or were taking a break from a short tour, and being in the neighborhood, and friends with them, Aja Salvatore invited them to his place for a few days to get some r & r &;r - rest, relaxation, and recording.  Fortunately, I was called in to engineer.
The core of Les Nubians are sisters Hélène and Célia Faussart.  They grew up in Paris, and Central Africa ( Chad) and started performing a capella in Paris and Bordeaux, France in 1993. They were joined by part of their Nu Revolution Band, Queen Aaminah (vocals), Shaun Kelly (drums), Fred Doumbe (bass), John Roggie (keys) Masahiro Shimizu (guitar). 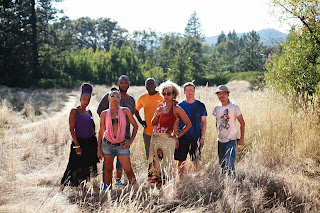 Their music has been described as neo-soul, hip hop, and African.  Neo, as in The Matrix, in my opinion after working with them.  They sing a lot in French.
Les Nubians were playing dates to support their last release, Nü Revolution, which seems more than a song or album title, but rather a movement in the (re) launching.  It looked clear to me, and you can tell by listening, that they intend the puns, Les Nubians Revolution, and New Revolution in Nü Revolution, but I don't know if they knew the Crowley connection. 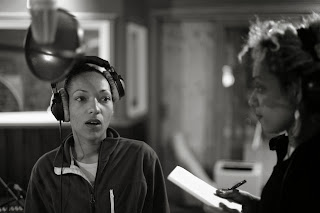 Célia and Hélène Faussart
Nu, of course, is short for Nuit, the sky goddess of all possibilities in Crowley's cosmology, and the reputed author of the first chapter of the Book of the Law.  Verse 12 from that chapter also makes a good descriptor for the song:
Come forth, o children under the stars, & take your fill of love!
A child actually does come forth at the end of the track reciting poetry about that subject.  In the background an all-you-need-is love-type chorus, but different, starts up.
Looked at through the lens of contemporary Hermetic Magick, Nü Revolution seems a text book rendition of Do what thou wilt shall be the whole of the Law.  Love is the Law, love under will only with great cascading vocals and African beats.
At the KSK studio, on their mini working holiday, Les Nubian's intention was to record a more organic, world beat alternate version of Nü Revolution.  The released version has a very commercial sound, the beat sounds a little machine-like, quite possibly it was programmed, I don't know, but it does have that sense of strict adherence to click track time, locked stock and barrel to the grid one might say.  It still sounds good, but I was glad to go for an alternate version more performance based.

We started by having the band play live - percussion (dun dun), bass, guitar, keys and vocal - using the drum and vocal tracks from the original version of Nü Revolution as a guide.  Overdubs went on top of that basic track.  Almost everything was recorded in one or two takes, very live and spontaneous feeling.

Naturally, since they are a singing group, there was a lot of vocal overdubs and arranging.  But it went very fast, they knew exactly what they wanted or figured it out quickly on the spot.  Hélène was the one mostly wearing the Producer's hat, steering the ship as it were.  She is very focused, has an excellent ear, knows what she's looking for and can communicate it.  Intense, but in a relaxed way, if that makes any sense.  In other words, a true professional, my ideal kind of producer to work with.  It becomes a musical journey, a shamanic passage, when you start with nothing but an idea and see it evolve, by group effort, into a powerful song. 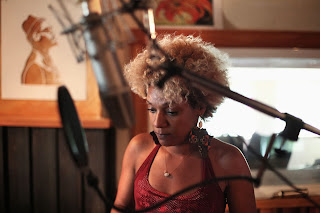 
Nü Revolution is, in my opinion, as powerfully a world changing song as anything that John Lennon ever wrote.  It actually seems like a little bit of the spirit of Mr. Lennon went into Nü Revolution.  The version we recorded isn't mixed.  I don't know its status but am hoping it will see the light of day.

In another part of the KSK facility editing was being done to the Mali music documentary.  An assistant had been hired to do some research.  He was asked to shoot some footage of Les Nubians in action but objected saying that it wasn't in his job description.  This wasn't received very well, but I reckoned it just as well. If he couldn't see the once-in-a-lifetime opportunity to experience this unique combo of musicians, literally from all over the world, guided by strong women with roots in Africa and France, then it seems fortunate that he stay out of that space.

It did feel like a very strong space, a musical voyaging chamber.  Treading upon the firmament of Nu.  Creating a Nü Revolution.  The three ladies had a vibe of ancient Egypt meets the future.  It wasn't overt or in the least bit pretentious.  Told them I was very interested in ancient Egypt and got a couple of knowing smiles.  Nothing else was ever discussed about it. 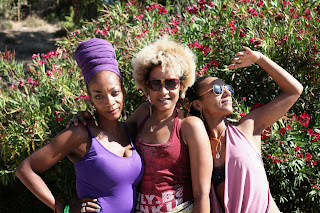 After the first day of recording I felt incredibly high ... naturally, although that's the first time nature ever gave me a project like that to record.

Much gratitude to all who made it possible.