Oracular Communication with the HGA

Chance operations and random selectivity interpreted within a reliable oracular system describes a time tested method for receiving communication from Higher Intelligence.  John Cage used the I Ching to compose music.  You can use oracles like the I Ching or Tarot cards or a number of things to communicate with your HGA, tap into your intuition, access the intelligence of the subconscious mind, however you wish to look at it.

You can devise your own methods of chance operations.  Lon Milo Duquette has one that uses a TV and a remote control to come up with a reading in his Book of Ordinary Oracles.

A favorite oracle of mine, bibliomancy, in the strictest definition means asking a question before opening up the Bible at random and letting your eyes naturally fall where they may..  This technique works with any book that has a comprehensive generalized symbol system that reads within one's lexicon.   Earlier in these chronicles I mentioned getting a reading from randomly opening the Collected Works of Carl Jung regarding the death/rebirth archetype which gave a valuable formula for significant brain change.

That oracular reception showed great success, but not all make it as far or anywhere close.  Sometimes they read like gibberish or seem inchoately obscure.  Intuitive discernment about what to accept, reject, or select in between gets finely honed over time.  Any artist tapping into their muse or looking for an inspired source will tell you that it's not always home.

Timothy Leary said that if he only got one out of three philosophical predictions right then he'd feel like he was doing well.  He compared himself to a baseball player who has a batting average of .333 considered extremely good.  So if useful info derives from only one out of three oracular consultations you're doing quite well from that perspective.  Usually the percentage grows higher especially if using a well structured system like the I Ching or the Tarot.  It increases with time and experience.

I've worked extensively with those oracles, they both serve very well in different ways.  Sometimes the answers astonish. Sometimes they shock.  Sometimes they bewilder.  Sometimes they mock. The I Ching encapsulates the ancient wisdom of the East while the Tarot contains the wisdom  found in the West.   One of Crowley's main innovations concerned introducing Eastern philosophies and practices into the Western Hermetic canon.  He even connects some of the I Ching hexagrams with the Court cards in the Tarot.

Though I've found the I Ching extremely helpful at times, the Tarot has become ( it didn't start out that way) for me a direct pipeline to the HGA.  The cards seem a natural for this kind of communication mainly because they steep and simmer with qabalistic correspondences.  Looking at the Tarot on a consistently repeated basis makes a great, artfully enriching way of learning these associations.  Every tarot card corresponds somewhere on the Tree of Life.  They carry astrological, planetary, elemental information, and more.  The trump cards seem like a library of archetypes and teaching stories from the common basis behind comparative mythologies and religions.

Though useful to do full Tarot spreads - I use the Celtic Cross slightly modified, a one card tarot draw can be effective and much faster.  Concentrate on a question, shuffle the cards and draw one.  If it makes no sense, do it again.  I'll often do a series of 2 - 4 one card draws to get a general read.  If it's contradictory or confusing, then I'll do a full spread if time permits.  If you do a lot of one card draws consistently every day and look up their interpretations and correspondences, you'll pick this up pretty fast as well as learning lots of qabala along the way.  You'll begin to tune in to the oracular voice of the tarot, one of the transmitters of the HGA.

Learning the Tarot is the single most effective and practical way I know for initiating Conversation with the HGA because you can just out and out ask it a question and get an answer in its own Angelic language.  A tarot card will give an answer in the Angel's imagery - incidentally one of the best ways to interpret the cards is just to simply look at their picture.  There will be intellectual content if you look at the qabalistic connnections.  Also, you'll often pick up a feeling or sensation of some kind.  The cards can function as an intuitive catalyst.

Asking questions about the future or about things you don't know can act as one way to verify or refute communication from the HGA.  The cards tell you one thing, which of course you remember or write down, then later you find out what actually happened.  I was recording what was supposed to be a breakthrough album for a rising star.  I wanted to mix it and knew that I was in the running.  The cards indicated disappointment about two months before the decision was to be made.  I didn't mix it, they used more commercially famous, name brand engineers.  The album didn't achieve the hoped for success.  I doubt that had to do with the mixes, but in retrospect, I'm glad not to have mixed it.  No failed expectations to answer for.

In my experience, the more you use an oracular system the more accurate it becomes.  You develop a relationship with it.  You can start to tell when it's on or when it's off, when it's joking around or when it's giving a dire warning, etc. etc.  It takes on the quality of an exchange with a dynamic, external living Intelligence of some vast and active kind.

Learning the Tarot will significantly aid penetration into Crowley's writings and cosmology.  His book on the Tarot, The Book of Thoth remains a classic in the field; one of the last books he wrote.  It's been said, and I agree, that he knew he would die soon so he put everything he had into it.  It's also been discovered that if you read it again in six months, it will appear to be a different book because you'll be noticing much more.  In fact, this seems to happen upon every reading.

Several of Crowley's visions in the book The Vision and the Voice, his exploration of Enochian worlds, are extensive guided tours through different Tarot trump cards.  Some of the cards make excellent meditational focal points.  They become doorways into parallel alternate Universes. For instance, the six of Swords in the Thoth deck has a beautiful painting of a rosy cross.

The Tarot can perform spiritual diagnosis.  It will deliver progress reports from the Angel if asked.  Working magically and mystically, alchemically and shamanically means riding into and penetrating the frontiers of the Unknown.  To say it less poetically, this kind of work, or Work, occurs in areas that seem largely unknown to ordinary consciousness.  We really don't know what effect we're having, if any, with our ritual work, meditations and prayers except what we directly sense, feel and intuit, though never really, absolutely sure, except when you are.  One of the properties or premises of the Angel is that it has full knowledge and vision in those realms.  It, after all, exists as your most trusted Guide and the sense that it's always there becomes more evident as contact increases.

So you can ask the Tarot, your communication conduit with the HGA, " how was my work with the ritual I just did,"  " how was it in the floatation tank," " how was it driving home from the studio today," "describe the result of Liber Resh performed just now," etc. etc. etc. and get a progress, or lack thereof report.  Sometimes you won't like the answer but other times you'll get surprised by a favorable outcome when it seemed nothing really happened.

I use the Thoth tarot almost exclusively these days.  I love the artistry, the vivid colors, the projective geometry of the drawing and the rich Thelemic imagery.  It's not a bad idea to use and get familiar with other decks.  I've received valuable lessons from the Rider Waite deck, and even once got something interesting out of the very New Age Osho deck.  Recently purchased Lon Milo Duquettes Tarot of Ceremonial Magick deck so I'll be looking into that soon.  I attended an excellent talk on the Tarot  from him once, he was the one that mentioned The Book of Thoth reading as a different book 6 months after the first time.

Useful information regarding timing can come through in a Tarot reading.  Timing can seem critical when experimenting more intensely.  When you get far out there, encounters with all kinds of various energies seem more likely to pop up on the radar.  You don't want to take off in a hurricane or run into one enroute, if possible.

I strongly suspect astrological considerations play a significant role in deducing good timing but have never had a strong enough interest in it to fix my attention on learning it in depth, therefore I don't follow what sign we're in or even phases of the moon except by looking at the sky.  However, every day of the year corresponds with a small Tarot card, every astrological position represented by them.  I perhaps imagine that this allows for the possibility of a reading of the astrological condition for any appointed time.  Don't know if this holds true, but I do get a good astral, or bardo weather report from looking at the cards.

Chapter 78 from The Book of Lies goes with this post.  You'll also find it on the first page of The Book of Thoth. 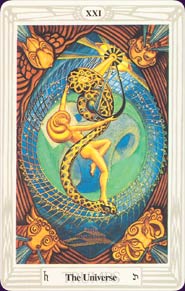