Crossroads of the Soul by Worlds Within Worlds

Thanks to art, instead of seeing one world only, our own, we see that world multiply itself and we have at our disposal as many worlds as there are original artists, worlds more different, one from the other than those which revolve in infinite space, worlds which, centuries after the extinction of the fire from which their light first emanated, whether it is called Rembrandt or Vermeer, send us still each one its own special radiance.
- Marcel Proust, In Search of Lost Time
Art is a veritable transmutation of substance.  By it, substance is spiritualized and physical surroundings dematerialized in order to refract essence, that is, the quality of an original world.  This treatment of substance is indissociable from "style."
- Gilles Deleuze, Proust and Signs.

Crossroads of the Soul was our quarantine album project. Worlds Within Worlds comprises six individuals, Tito Rios, Niralee Kamdar, Nishit Gajjar, Sebastian Pulido Vela, Paula Galindo and myself.  The group name reflects the diversity of musical influences contributing to the sound as well as the connecting theme linking the songs: voyaging through space and time, the exploration of higher consciousness.  The music ranges from electronic, ambient, ambient dub, Andean folk, all variously enhanced with Brazilian percussion and samples from around the world.  It is released on the Cloister Recordings label. 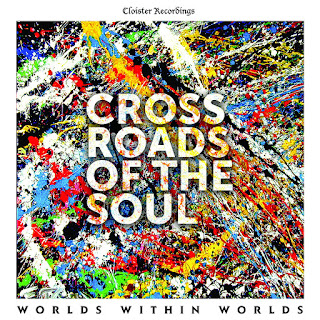 The Starseed Signals
A RAW perspective on Timothy Leary PHD
by Robert Anton Wilson
This new 470 page plus book published by Hilaritas Press out of Grand Junction, Colorodo lifts the veil a little bit more on two of the most remarkable philosophers and experimental adventurers of the XXth Century.  Robert Anton Wilson and Timothy Leary explored, navigated and transmitted cutting edge, brain-change technologies and applications beginning in the 1950s going until the very end of their respective lives.   They both used their biological deaths to communicate very potent final messages. This book emerged out of one of the most prolific and creative periods in Wilson's writing career, the early 1970s, when he also wrote Cosmic Trigger I, Prometheus Rising and began work on Schrodinger's Cat.
The Starseed Signals arose out of necessity, the necessity to rationally and intelligently explain Timothy Leary, his ideas and research findings, at perhaps the most difficult time in Leary's life.  Behind the scenes in this book, Leary desperately negotiated for his freedom and life with the fascist Nixon regime under extreme duress in harsh prison conditions while simultaneously getting prematurely judged and condemned as a sell-out informant by the Left.  Misinformation and disinformation about Leary's situation abounded and part of Wilson's intention, it seems, was to set the record straight.
Herein we find a story of real philosopher/adventurers like they had in Ancient Greece:  philos = brotherly love; sophia = wisdom; the story of two friends who truly loved wisdom to the point of endangering their own welfare in its service.  We find out that Wilson presciently compared Leary's position as a State target to Wilhelm Reich's earlier persecution and basically warned him in person that a similar fate might await (it did).  Leary brushed aside these dire concerns with his typical care-free optimistic good cheer mixed perhaps with too much denial for his own good.
In these pages, Wilson presents Leary's case, his work and consequences, as objectively as possible beginning with the groundbreaking publication of The Interpersonal Diagnosis of Personality, "a study of comparative realities, the power politics of perception and emotion.  Its thesis, in colloquial terms, is that "ego" is a social conspiracy for which one person at a time gets blamed."  You will find no better explanation of Leary's groundbreaking pre-psychedelic scientific contributions to Psychology.  That alone makes this book a treasured historical document.
The Starseed Signals was a lost work. RAW set it aside and moved on and the manuscript disappeared.  The story of how it got found and emerged to see the publishing light of day is told on page XI.  Some of this material found its way into Cosmic Trigger, The Final Secret of the Illuminati.  In some regards, this seems like the Bootleg edition, or the expanded out takes reel for Cosmic Trigger.  It gives a lot more background and context to what went on around the time of the creation of Cosmic Trigger, a book that changed my life.   It seems that because it never went through the final process of getting published, RAW's own editing seems less rigorous, more wide open i.e. a lot more left in, than in finished works like Cosmic Trigger.
This seems an essential read for anyone interested in Dr. Leary's 8 Circuit model of Consciousness, this likely being the first of Wilson's ongoing lifelong exegetical presentations of this model.  I've found that RAW has a unique ability to take complex information and present it an understandable way to average people like myself.  He does that in this book not only with Leary's latest research and taxonomy of consciousness but, to greater or lesser degrees, with a variety of subjects: Aleister Crowley's Magick, LSD, Gurdjieff's system ( less so than Crowley's), longevity and immortality research, Wilhelm Reich, William Burroughs, Space Migration, and the consciousness of plants, among others.  The first two short paragraphs in the book alone references Aldous Huxley, Carl Jung, John Lilly and the value of skepticism. The 8 Circuit model gets the highest percentage of explanation with multiple iterations of it throughout the book.
The Starseed Signals derives its title from a series of telepathic experiments that Leary and a few others did where they felt they received communication from  an extraterrestrial source of Higher Intelligence.  Independently, and coincidentally, RAW experienced similar contact phenomena around the same period of time.  Starseed also refers to the theory of Panspermia, that life originated in Outer Space, that the chemical "seeds" for life arrived on earth via meteorites.  Leary aligns himself with this hypothesis. 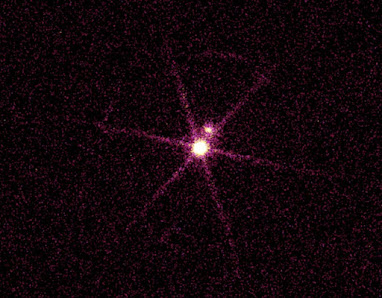 Sirius, the Dog Star
The subtitle of this book, Link Between Worlds, ostensibly indicates the link between Timothy Leary and Robert Anton Wilson yet this subtitle covers broad territory.  As a student of Magick, I took great interest in the presentation of Wilson's research into Aleister Crowley and how that connects with the Starseed subject matter.
Naturally, The Starseed Signals transmits multiple signals.  One could consider it a frequently modulating carrier wave like a radio or television (tell a vision) station. The root of signals = signs.  Cabala describes a complex lexicon of signs (semiotics) and we know that RAW availed himself of this method.  I agree with Eric Wagner when he states in his Insider's Guide that one can find Cabala in all of RAW's books, this new find doesn't make an exception.  The praxis of Cabala also opens links between worlds.
We discover that RAW had begun a book project about Crowley titled Lion of Light.  RAW leads off Chapter 8 (Hod = Mercury = communication)  with a quote from a poem called One Star in Sight showing where he got the title for the Crowley book project:
To man I come, the number of
A man my number, Lion of Light;
I am The Beast whose law is love
Love under will, his royal right –
Behold within, and not above,
One star in sight!
- Aleister Crowley
The number in question = 666 which, under oath in a Court of Law, Crowley explained as the solar number 6 given three times.
One premise of magick and this book maintains that humans can make contact with Intelligence far beyond the human domain.  The proof of the pudding is in the eating of it; we can carefully and attentively observe the Starseed semiotics and infer whether such contact may have occurred with the invocation of this book much like a physicist might study the residual effects in a Wilson Cloud Chamber after bombarding it with energetic, sub-atomic particles.  Cabalistic semiotics that he wouldn't have consciously known about appears the same rationale Crowley uses to "prove" The Book of the Law came from a Higher Intelligence outside his own.
For instance, the very first word put down by RAW in Chapter One = "This;" the very last word in the book = "service" – the entire text lies between the words, "This service."  The Starseed Signals not only provides a service, in my opinion, it illustrates how to be of service both to self and to others.  Perhaps just a coincidence, yet I find it notable that "this service" = 69 by the Cabalistic method of Notarikon (transposing the initial letters into numbers and adding them).  69 can suggest mutual reciprocation, like the yin/yang symbol of the Tao, or connection, like the edges of a book – Finnegans Wake being a prime example.  The gematria of 69 = " a manger, stable; an enclosure;"  as in the edges that enclose this book.
On page 174 RAW makes a startling admission I've not seen elsewhere, he gives himself away a little more than usual:
"I also developed what occultists call 'inner certainty;' that is, I knew when this sixth circuit faculty was operating and could be trusted. ...
I have now developed a system, based on Crowley combined with Dr. Leary and Dr. John Lilly, in which any ordinary person can be trained to obtain similar results within six weeks, at least on a sporadic and occasional basis.  Further development of the sixth circuit, of course, requires further training."
Later, in a letter to Greg Hill published in the closing pages, RAW mentions that a collection of essays called Prometheus Rising is scheduled for publication.  Perhaps this contains the system he was referring to?  Although he recommends the first exercize  in PR be practiced for 6 months, not 6 weeks.
The Starseed Signals begins with an invocation of Nuit in the form of a poem by Arlen Wilson called Our Lady of Outer Space.  The Notarikon of the book's first phrase, "[t]his is a journey inward and outward..." = 111 which connects with the initials of Anna Livia Plurabelle, the name of the Goddess archetype in Finnegans Wake. A journey inward and outward also alludes to the Thelemic cosmology of Nuit as the infinitely large (outward) mating with Hadit, the infinitely small (inward).  And so on...
Also of interest to me is the brief description of the group magick workshops RAW gave in Berkeley, the first I've ever heard about that specific activity.
This book begins with a quote from Leary that asks, "[w]hat will be the next step in biological and social evolution?"  One could say that the rest of the book attempts to answer that question along with much insight into researchers who consider it and their methods.  Shortly after, following the introduction and emphasis on skepticism, RAW states the intention of this book:
"But we do not ask the reader to accept anything here as dogma.
If this book encourages further investigation and original thinking, it will have served its purpose; if it leads only to blind faith in the hypotheses it puts forth, it will have failed entirely."
Posted by Oz Fritz at 3:31 PM No comments: