After The Beatles, Sergeant Pepper's Lonely Hearts Club Band album came out, Dr. Timothy Leary declared it the ultimate document to communicate his message, the message of self-directed, personal freedom of consciousness to grow and expand as it will.  Led Zeppelin plays that role for the maps and techniques of consciousness expansion presented by Aleister Crowley, i.e. his system of magick called Thelema.  Speaking from experience, one way to get Thelema deeply imprinted into your DNA and engrained into your body of habits is to listen to a lot of Zeppelin's music.  Thanks to guitarist Jimmy Page's "reading and research," Led Zeppelin became a lightening rod for the 93 Current, sometimes consciously and deliberately, but probably a great deal of its reception unconscious to the four band members.  They facilitated and had a means to broadcast a group invocation that drew down a wealth of esoteric data. They acted as antennas and transmitters for the spirit of the A.'. A.'., a magick order established by Crowley and George Jones that, in Postcards to Probationers, claimed to have the methodology to produce Christs.

One of Robert Plant's consistent, improvisational ad libs in live performance is " push ... push... push" as if encouraging the birth of something.  For instance, he does that in The Song Remains the Same,  a song where the narrator starts off in a "crazy dream" where he apparently becomes Horus, the Thelemic deity presiding over this era. 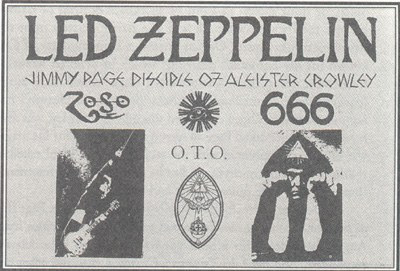 This essay, a quick sketch, looks at the Zeppelin/Crowley alliance as exemplified in the song sequence from their reunion album, Celebration Day.

1. Good Times Bad Times - Crowley's ontological 0 = 2 formula put into human terms of eros and set to music.  He explains this formula in Magick Without Tears Chapter V: The Universe: the 0 = 2 Equation.  This song also declares a statement of intent at the beginning - "Now I've reached the age I try to do all those things the best I can" and in the end, "I'm going to love you each and every day." The first song on Led Zeppelin I, their first recorded offering, so an excellent way to start their reunion, and possibly last concert.  Especially apropos given the title of the concert recording, Celebration Day.  Plant ends his contribution to the first song with the ad lib: "c'mon, c'mon, c'mon which for working mystics of the Thelemite persuasion might suggest activating the ON equation.

2. Ramble On.  The ON equation pops up in the very next song. A problem gets stated: "And now I smell the rain and with it pain and it's heading my way." A solution given: "Ramble on ... sing my song ... on my way ... ramble on." Or as some might say; "Do what thou wilt." The problem gets clarified in the bridge when he meets a girl so fair (BABALON) in the depths, but Gollum, the evil one steals her. The solution, or response, then follows with the last chorus: "Ramble on ..." We infer the girl so fair = BABALON because in the previous chorus he has to "find the queen of all my dreams."  Plant's final ad lib in this one: "I got a feeling in my mind" which qabalistically connects Netzach (feeling) with Hod (mind).  Those sephiroth on the Tree of Life connect to Tiphareth through the paths of  Ayin (O) and Nun (N).

3. Black Dog.  Plant still searches for the queen of all his dreams, which, given the song's title, suggests the Thelemic ordeal of crossing the Abyss.  Black dog suggests the flip side of its opposite, white god – that could imply the hazardous side of in-depth theurgic magick. The animal comes out and gets stronger along with the divinity, sometimes the dog seems black.  The abyss between the two appears actual.  The song's hot and sexual nature recalls this from The Book of the Law I:61:

"But to love me is better than all things: if under the night stars in the desert thou presently burnest mine incense before me, invoking me with a pure heart, and the Serpent flame therein, thou shalt come a little to lie in my bosom. For one kiss wilt thou then be willing to give all; but whoso gives one particle of dust shall lose all in that hour."

4. In My Time of Dying. Heavy Zeppelin blues from a traditional song; advocates for a different way of dealing with physical death, please no sadness just bring his body home so he can die easy.  The prevalent instruction from the Egyptian Book of the Dead to unite with Osiris (Tiphareth) at death, in the form of Jesus in this song, gets invoked after taking care of his body.  Then a journey with religious imagery along with the weighing of his heart on the scale.  Plant's last ad lib is the same one at the end of Good Times/Bad Times mentioned above suggesting a cycle with the repetition.

5. For Your Life.  The titles In My time of Dying and For Your Life in sequence spell out the death/rebirth cycle as a powerful method for transformational change.  It recalls the Sufi instruction to "die before you die."  Lyrics are abstract and ambiguous, lot of sexual overtones, could refer to Babalon as the Scarlet Woman.  Plant starts the last verse with lines not in the printed lyrics: "I'd like to help you baby, but I don't know what to do ... Sometimes baby, there's nothing I can do ..."

6. Trampled Under Foot. "Love, love, ... I  can't stop talking about love." Love is the law, love under will.  It seems frequently trampled under foot in this day and rage. Foot = Malkuth, the plane of the material world.  Plant wails out the "PUSH" ad lib.

7.  Nobody's Fault But Mine.  Another traditional blues Zeppelinized.  "Try to raise my soul divine." No one else can do it for you.

8. No Quarter.  The classic hero's journey continued. "Walking side by side with death, the devil mocks their every step."

2. Dazed and Confused. "Wanted a woman, never bargained for you" (Babalon again). "Lots of people talking, pretty few of them know. Soul of a woman was created below."  Liber Al I:32: "follow out the ordeals of my knowledge."

3.  Stairway to Heaven.  This one should need no explanation.  An alchemical song par excellence.  Buying a stairway to heaven, paying in the currency of your own efforts; bootstrapping your personal evolution.  The divine feminine, Babalon, that turns up in so many Zeppelin tracks as noted, becomes the Guide in this one.

4. The Song Remains the Same. An invocation of Horus as mentioned above.  "Everything that's small has to grow ... and it always grows ... push push yeah!"

5. Misty Mountain Hop. Inside these lyrics of a fantasy encounter in the Misty Mountains, where the spirits go, shades of Tolkien, is a pair of confrontational couplets:

Why don't you take a good look at yourself and describe what you see
"And baby, baby, baby, do you like it?
There you sit, sitting spare like a book on a shelf rustin'
Ah, not trying to fight it."

6. Kashmir. Another epic journey of the soul, but it's not all roses, roses.  One verse suggests the ordeal of crossing the Abyss:

"All I see turns to brown
As the sun burns the ground
And my eyes fill with sand
As I scan this wasted land
Try to find, try to find what I feel."

7. Whole Lotta Love.  Again needs no explanation.  "You need coolin, baby I'm not foolin'. I'm going to send you back to schoolin'.

"This shall regenerate the world, the little world my sister, my heart & my tongue, unto whom I send this kiss."

Of course the titles, lyrics and ad libs from Zeppelin's Celebration Day reunion concert represent only one side, not the most dominate side of the 93 current transmission in their songs.  Most of the power, most of the force resides in the music particularly the guitar playing along with Page's gesturing.  For more elaboration about this, see my review of this concert DVD.
Posted by Oz Fritz at 5:47 PM No comments: