Toshinori Kondo is one of the world's top players of the electric trumpet. I've had the great fortune of knowing and working with him since about 1991 when I went to Japan with Bill Laswell to mix the Front of House at the festival Kondo organized in his hometown, Imabari. We also recorded an improvised album at Kondo's studio, Metal Box, on the same trip called, The Map Is Not the Territory. It features an incredible line-up of musicians. Along with Kondo and Laswell it includes Ginger Baker, Anton Fier, Yamaki, Foday Musa Suso, Akira Sakata, and Peter Brotzmann among others. This collective became known as Autonomous Zone a name derived from Hakim Bey's radical manifesto, Temporary Autonomous Zone. Kondo began his Blow The Earth project playing solo against the backdrop of Israel's Negev Desert in 1993. 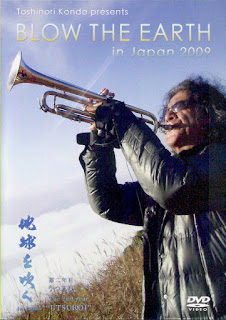 I recently saw the dvd for his Blow The Earth Japan segment in which he "played the four seasons of Japanese nature." About Blow The Earth Kondo says: I wanted to improvise with the vibration of Great Nature. Blow The Earth is a quest for seeking the music of the XXIst Century ... The four seasons of Japanese nature seems like the breathing of Earth. I hope you can enjoy it!
Most of the performances on Blow The Earth Japan are solo offerings outdoors in majestic and beautiful settings. The cinematography is crisp and alive, effectively capturing the grandiose scope of Kondo's vision. The various environments read like a visual musical accompaniment to the electric trumpet phrases and progressions often awash in a halo of atmospheric effects but sometimes sounding just the pure tonality of the horn.
The Winter portion has Kondo playing at the Kamigamo Shinto Shrine in Kyoto. Here he improvises with chanting priests. Kondo also introduces Professor Naiko Tosa, a visual artist who researches interactive media art at Kyoto University. She and I would attempt to express the presences of the Gods through visuals and music.
This demonstrates the invocational nature of Kondo's music which becomes obvious when you hear it. Tosa adds, The ancient figures and the lightning will move with Kondo's trumpet sound. This is the aim of my interactive art.
Kondo mentions that the god of this shrine is Thunder which is fire. But thunder brings rain so it is a god of water, also. So no one was surprised when it began to softly rain during the set-up for the show and the performance. The sound of the rain contributed gentle background polyrhythms to the composition.
Spring sees Kondo and his electronics perched atop a small rock overlooking Kurushima Straits, the entrance to the Inland Sea, an area he played in as a child.  He also plays at Koriyuji Temple on Oshima Island, the family temple of the Murakami pirates. The performance opens with a group of Buddhists chanting an ancient poem of pilgrimage before Kondo improvises on the horn with traditional taiko drummers.
For Summer Kondo travels north to Iheya, a small island near Okinawa to play during a solar eclipse on the beach just outside the entrance to a huge cave considered to be sacred. A crowd of about 300 gathers with protective eye filters to witness the solar eclipse while Kondo plays in front of an entrance to the Underworld. 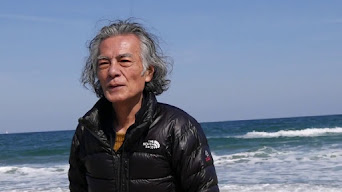 Autumn finds Kondo playing on top of Mount Aso in central Japan. He was hoping that a local phenomena of climate known as the Sea of Clouds would occur. It manifests as a continuous blanket of white cloud cover just below the summit of the mountain so that it appears as a sea of clouds from the mountain top. Told by a local that it's extremely unlikely that the Sea of Clouds would happen in the next few days, Kondo says that it's no problem, he will camp out on the mountain until it does. The next morning the Sea of Clouds rolls out in fine form apparently not wanting to be late for the curtain call. Kondo takes Shakespeare literally when he says, "All the world is a stage."
Apart from his other music projects, Kondo is a member of the Bill Laswell organized collective, Method of Defiance.
Posted by Oz Fritz at 12:32 PM