This Is The Space Age

A recent post at RAWIllumination.net linked to a very interesting comment made by Timothy Leary at the Nova Convention in 1978 that I'd like to examine, especially in relation to music.

The Nova Convention was organized to present the works and interests of William S. Burroughs and various other writers, artists, musicians, philosophers, poets, and visionaries that had been inspired by him. It served up a counter-cultural all-star game with Frank Zappa, Robert Fripp, Brion Gysin, Robert Anton Wilson, Timothy Leary, John Giorno, Allen Ginsberg, Blondie, Patti Smith, Laurie Anderson, Anne Waldeman, Phillip Glass, and others.

To give some perspective: The Convention began November 30, 1978. November 18, 1978 is when Jim Jones allegedly convinced his followers to commit mass suicide by drinking cyanide after some of them attacked and killed a U.S. Congressman and 6 of his party who had been investigating the cult.

Apparently, at about the same time, William Burroughs had been given an assignment by a major magazine to write a piece on the Jonestown cult. The story I heard, and it may be apochryphal I haven't found a source for it on the web, says that Burroughs was enroute to Jonestown when the suicide went down so that when he arrived he only saw the aftermath.

Robert Anton Wilson had written about a mass suicide with cyanide as a satire on brainwashing in Illuminatus! a few years earlier.

My point in bringing this up is to show that human insanity, stupidity, confusion and chaos created just as much of an emergency condition then as it does now. Burroughs and other participants of the Nova Convention were right in the thick of it and were offering up and suggesting solutions.

Q. What is the Nova Convention about?

Burroughs: This is the Space Age and we are here to go.

Leary's comment that I want to discuss comes from a recording of a panel discussion found by going through the last link, #16, on this page. It's from the album, The Nova Convention by Giorno Poetry Systems.

Leary's comment:
To move into new space is the only way new realities can be created and the fastest way that new nervous systems can be activated.

It becomes obvious from Leary's next statement that he is NOT talking about a new space created by LSD or other drugs. It also seems clear with this brief panel discussion sample that moving into new space includes more than transporting our biological containers off Earth.

So what does it means to move into new space and how might that create new realities?

Another comment from the panel points out that no distinction of inner or outer space gets made implying that Leary's statement applies to both. I consider the distinction between inner and outer a convenient, but ultimately false dichotomy.

At the time of the Nova Convention there existed high hopes that the human race would migrate off the planet in the near future. Leary waxes poetically in places of the accelerated personal evolution that could occur in a zero-G environment. At present time, it doesn't seem likely that an ordinary person in my generation will experience any kind of off-planet environment to work in. For the time being, we can rule out space travel as a practical means of creating new realities and activating new nervous systems for all but a very few.

The Tibetan and American Books of the Dead highlight this by mapping out a series of sequential chambers the voyager passes through. Similarly we may view each room or location we pass through in daily life as one in a series of "chambers." As in the Bardo, it can be observed that each chamber affects our consciousness, our perception of reality. Thus, a new reality can potentially be created simply by paying close enough attention to our inner and outer environment.

This kind of attention directed both outwardly and inwardly at the same time is what G.I. Gurdjieff called remembering yourself. In Beelzebub's Tales To His Grandson Gurdjieff alludes to the idea of new space = new reality by indicating that the architecture of a building affects consciousness. Anyone can verify this for themself by going into a beautiful church or cathedral. I submit that even the staunchest, most determined atheist would feel their mood uplifted simply by entering St. John the Divine Cathedral in Harlem though they might think it all based on nonsense. 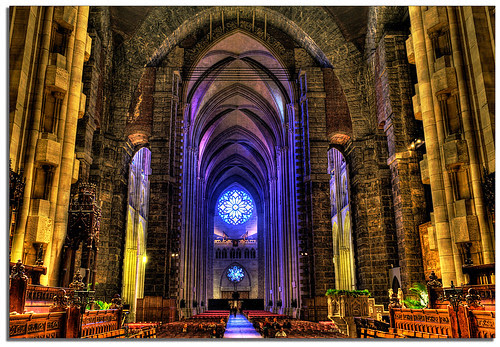 To help facilitate this kind of remembering you can do an exercise to wake up somehow ( whatever that means to you) or invoke presence every time you cross the threshold into a new space. An elaboration of this appears in E.J. Gold's Practical Work On Self chapter 15 called Doorways. You'll also find there an explanation related to the activation of new nervous systems through this exercise.

I'll leave it at there for now and get into music and new space next time.
Posted by Oz Fritz at 5:17 PM