Two new cds getting lots of play at The Oz Mix headquarters are Rise Again by Lee Scratch Perry, and surprisingly, the recent tribute to the songs of Buddy Holly called Rave On. 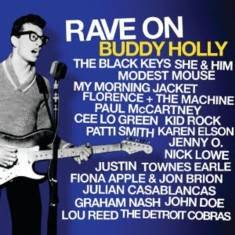 I'll talk about Rise Again soon, in a future post, but first I have to rave on about Rave On. I wasn't expecting to like this album as much as I do. Outstanding soulful performances, interesting new arrangements sometimes very different than the original, and best of all, excellent, often out-of-the-box audio production.

The highlight for me has to be Paul McCartney's two versions of It's So Easy. One version sounds like a raucous garage band reinventing the passion of rocking out for the first time, vitally fresh and alive. The production is exquisitely raw and down to earth - a tastefully distorted lead vocal compels McCartney's powerful delivery that gives the feeling of someone pulling out all the stops to communicate their truth. The gorgeously over-compressed drum sound squishily keeps a smoothly rolling rhythmic chug with cymbal splashes sustaining forever. This drum sound makes a big contribution to the contemporary/retro atmosphere of the track.

I once joked about writing an academic paper on the different types, uses and abuses of compression in audio mixing. Over-compression can choke a sound much easier than it can create an interesting new texture. It's a fine and delicate art getting interesting sounds with extreme compression. The It's So Easy drum sound would be one model example if I get around to writing that paper. If I had to guess, I'd say they used vintage API 525 compressors which can do magick things to a drum beat. This track, produced and engineered by David Kahne, was recorded at Avatar in New York. Avatar used to be the Power Station, and still sounds like one of the top studios in the world.

Rave On, in particular the garage version of It's So Easy makes a great soundtrack to everything I've been writing about Qabalah.

Recently I saw a documentary on comedian Bill Hicks, someone largely off my radar until now. There was one clip where Hicks bemoaned the state of music and expressed, in a very catharic fashion, the kind of music he'd prefer to hear. I wish he was still alive to hear Rave On because it fully meets his criteria.

I found the same clip on YouTube. Warning: it's quite intense. I completely disagree with the Amy Winehouse spin imposed on it. I don't believe Hicks was being literal when calling for death.

When he rants: "I want them to play with one hand, and the other on a gun (pointing to his head) ..., " it gives a graphic variation on Crowley's instruction to "Slay mind" from the Lambskin poem a few posts back.

A number of other tracks from Rave On exude the same kind of passion but with a more elegant aesthetic. Patti Smith's version of Words of Love is another favorite from this collection. Critic David Fricke from Rolling Stone called it a 'precious wish.' Fiona Apple and Jon Brion do a superbly intimate version of Everyday. Florence + the Machine play a unique version of Not Fade Away that evokes the mood of a New Orleans street band on a joyful funeral march. All of the tracks are well done and worth listening to.

This recording highlights the brilliance of Buddy Holly's songwriting, something I didn't fully appreciate until now.