William S. Burroughs in the Studio 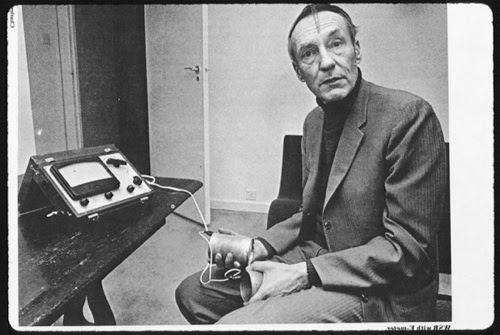 The first session I ever worked on with Bill Laswell's Material involved recording legendary Beat writer, William S. Burroughs. I had worked on a couple of previous projects with Laswell and his engineer, Robert Musso, at Platinum Island, the studio where I worked . They were mixes of albums by two experimental jazz artists, Yosuke Yamashita and Ronald Shannon Jackson.

At the time, I only had a vague notion of who William Burroughs was. Knowing of the session a few weeks ahead of time, I purchased a number of his books to become more familiar with his work. However, the 80-110 hour work week schedule as a staff engineer at a top New York studio prevented me from reading any of them except his first one, Junky, not exactly the best one for learning about Burroughs. The result being that I had absolutely no clue that I was about to see someone extraordinary.

I will never forget when we met. I was in the lounge when the studio manger escorted Burroughs in. As we shook hands, I had the very unusual experience of everything seeming to disappear except for the presence of Burroughs and myself. For a brief moment, it seemed like nothing existed except WSB and myself surrounded by white space. Definitely not what I was expecting.

Burroughs was there to read from his most recent book, The Western Lands, which is basically his take on the Egyptian Book of the Dead material and the perilous adventures of life after death

The music tracks he was going on were originally made by Laswell and Nicky Skopelitis for the follow-up to the generic Public Image Limited (PiL) album Bill had produced for John Lydon (Johnny Rotten) in 1985. Laswell and Lydon had a falling out over creative differences, the main difference being that one of them wanted to be creative.

At Musso's suggestion, I had set-up a table with a lamp to get Burroughs feeling like he was doing a public reading where he usually sat at a desk. A vintage Neumann tube U47 microphone was suspended on a boom upside down with a wind screen and tilted slightly in front of the writer. We recorded him onto a Studer 1/2" tape machine running at 30ips with no noise reduction.

Burroughs was using a copy of the book that Bill had highlited passages for him to read. After he read a few sections, it became obvious to me that Burroughs possessed a unique genius with extraordinary insight. For example:

Top soul, and the first to leave at the moment of death, is Ren, the Secret Name. This corresponds to my Director. He directs the film of your life from conception to death. The Secret Name is the title of your film. When you die, that's where Ren came in.

Second soul, and second one off the sinking ship, is Sekem: Energy, Power, Light. The Director gives the orders, Sekem presses the right buttons.

Number three is Khu, the Guardian Angel. He, she, or it is third man out...depicted as flying away across a full moon, a bird with luminous wings and head of light. Sort of thing you might see on a screen in an Indian restaurant in Panama. The Khu is responsible for the subject and can be injured in his defense - but not permanently, since the first three souls are eternal. They go back to Heaven for another vessel.

The four remaining souls must take their chances with the subject in the Land of the Dead...

Every now and then Burroughs would take a break and come in to the control room for a playback. His companion, James Grauerholz, would usually say something to the effect of, "great job, William, you're really doing well, etc..." Burroughs would either not respond to the compliment or grunt something inaudible under his breath. After the third or fourth time of Grauerholz giving praise, Burroughs became visibly perturbed and raised his voice saying, " IT'S NOT ME! IT'S NOT ME!!."

What little I knew of WSB came from Robert Anton Wilson's book Cosmic Trigger. Wilson's current release at the time Coincidance : A Head Test, contained experimental writing that used computer software to employ the cut-up technique that Burroughs had popularized with friend and collaborator, Brion Gysin. I brought my copy and asked Burroughs if he'd seen it. He hadn't, so I told him about the software cut-ups and showed him the book. He became very interested, so I told him he could keep it. Contradicting his dour reputation, he lit up in delight like a kid who has just received a wonderful present. He said that it was perfect because he didn't have anything to read on this trip or time to pick something up. Then he started talking fondly about having met Bob Wilson at some sort of panel discussion in the '50's.

Burroughs and Grauerholz left shortly after to visit Keith Haring who had his art studio two floors above Platinum Island.

The recordings Burroughs made that day appear on the Material album Seven Souls.
Posted by Oz Fritz at 1:08 PM