Sound Can Act as a Painkiller

Another co-incident with Seven Souls...

William Burroughs' first words on the album are:

Sound can act as a painkiller.
At date we do not have music sufficiently powerful to act as a practical weapon.

The second line is now up for debate, but that's another story.

In 1991, days before the first Gulf War, John Zorn formed an improvisational trio with Bill Laswell and drummer Mick Harris called PAINKILLER. Mick was an original member of Napalm Death. It started as an experiment, a one-off recording done at Laswell's Greenpoint studio. The recording went very well, the chemistry between the three of them clicked right away and some extremely powerful music flowed through them, all of it composed on the spot as they performed. A whole album worth of material was tracked in the first session.

The were a few minimal overdubs, all of them one take keepers. Some of these were Mick's shouting, screaming, apparently nonsensical vocal wailings. One 'word' that he used a few different times sounded like SCUD as in the line:

rising in pitch and intensity.

At that moment it meant nothing to me but by the time we were mixing, the phrase
SCUD MISSILE was all over the news.

I recall it getting mixed in two sessions.

This experiment of putting 3 musicians into the Greenpoint labratory spontaneously yielded a powerful new sound, dense and heavy, but with the aesthetic and vision of free jazz. They clearly tuned into the zeitgeist. A new band project was born. Zorn called it Painkiller. I'm pretty sure he didn't get the name from the Seven Souls album. Chalk it up to
Coincidence Control along with Mick's scud prognostication, if you like. 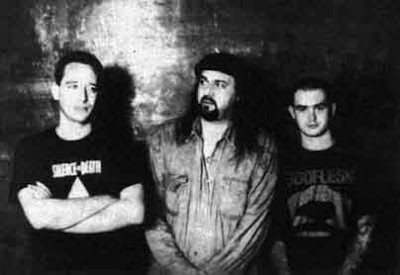 Once, using a qabalistic process called gematria which transliterates letters into numbers, I analyzed the word 'painkiller' as God's music.
Posted by Oz Fritz at 12:54 PM