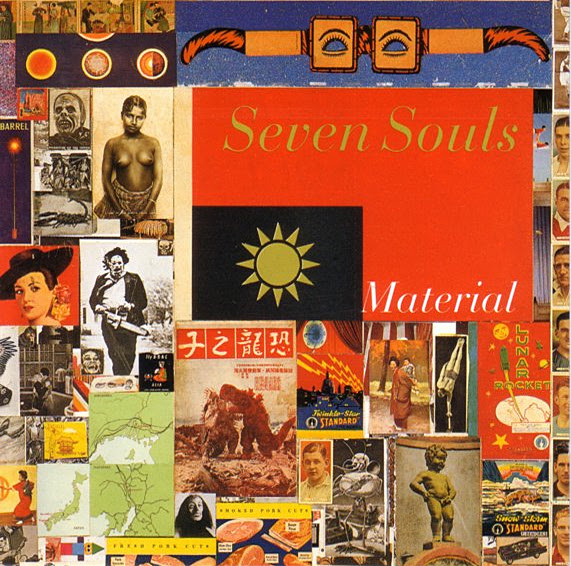 A collage seems the perfect choice for the cover of this music for a few different reasons. The music itself is very collage-like especially when looking at the album as a whole. The musical elements and influences it weaves together include: Moroccan, West African, Illuminated Hip Hop, found sounds of Gospel preachers off the radio, funk grooves, and the spoken literature from one of the more rigorous modern explorers of consciousness.

Much of Burroughs' work collages words and images especially when it employs cut-up methods. Cut-up writings introduce randomity and chance operations into the literary process giving a great abstract effect. Collaged cut-ups and juxtapositions create new realities. David Bowie is another artist who has used the cut-up technique to inspire creativity. The tracks Ineffect and Equation contain music cut-ups.

From reading the short bio I linked to, Ohtake seems the ideal artist to provide the visual component of this audio masterpiece. From the bio:

Shinro Ohtake takes the world as his source, using journeys, dreams and diaries to examine the inner surface of his layered perceptions.

The coincidence with the art was told to me last year at a Material concert at an incredible Austrian winery. This version of Material featured the songs of Gigi, Laswell's beautiful Ethiopean wife.

After the show, a dedicated Laswell fan, someone who will travel with his wife to see Bill play anywhere in Europe, whose name I neglected to collect, told me about a time when he visited Japan and happened to end up at a party at the house where Shinro Ohtake's original painting of the Seven Soul's collage lived. He walked into a room and there it was, quite the surprise. He recognized it immediately and starting telling the people around him the connection of the painting with Seven Souls. He also explained who Bill Laswell was. Unbeknownst to the raconteur, Bill also happened to be in Japan and, quite remarkably, turned up at the same party. Bill walked into the room that had Shinro's painting immediately after the fan finished talking about him. It was almost like Laswell had been invoked into physical appearance.
Posted by Oz Fritz at 11:04 AM