Po is a word that precedes and signals a provocation.  A provocation is an idea which moves thinking forward to a new place from where new ideas or solutions may be found.  The term was created by Edward De Bono as part of a lateral thinking technique to suggest forward movement, that is, making a statement and seeing where it leads.  It is an extraction from words such as hypothesis, suppose, possible, and poetry al of which indicate forward movement and contain the syllable "po."  Po can be taken to mean Provoking Operation. - Wikipedia, slightly modified.

The push to open the US economy against the advice of health experts and before adequate testing is in place to determine who is sick and who is not, seems another example of the schizophrenic side of Capitalism.  The probability seems high that another surge in covid 19 illness would further cripple the economy, not to mention kill off consumers.  I prefer this model as an explanation, the schizo proclivity of Capitalism, to the darker one that population control, i.e intentionally allowing people to get killed, motivates the rush to open the economy. 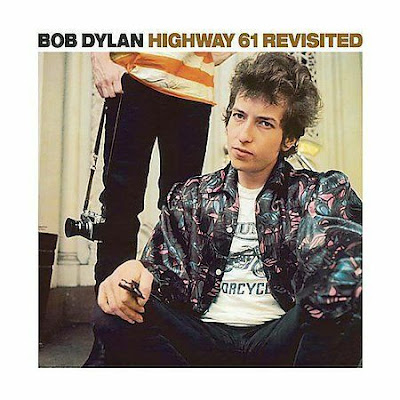 I was inspired by a Facebook game to listen to Dylan's Highway 61 Revisited while driving into town to pick up some Iris cuttings for our garden.  It struck me that some of the lyrics, when isolated, written circa 1965, resonate with current times.  Of course, many of his poetic lyrics sound timeless, but I found fresh significance particular to this time  in some of the imagery.

For instance, from Tombstone Blues - the song's title alone reflects the current atmosphere of death:

The ghost of Belle Starr she hands down her wits
To Jezebel the nun who violently knits
A bald wig for Jack the Ripper who sits
At the head of the Chamber of Commerce.

Belle Starr was a 19th Century American outlaw.  Her name also alludes to a Tarot card image, the woman pouring forth celestial sustenance on the Star card.  Dylan studied the Tarot at some point, probably somewhere between Rimbaud, Kerouac, & Ginsberg, and Jesus Christ and The Talmud.

Jezebel the nun refers to the wife of the Biblical ruler of North Israel instrumental in steering her kingdom away from Judaism.  She wasn't a nun, the first nuns appeared in the middle ages, however nun suggests nihilism.

The third and fourth lines of this stanza indicate Trump and Capitalism.  Trump's overly aggressive, combative inclination to attack anything that challenges, criticizes or opposes him resonates with Jack the Ripper.  Advocating to open the economy at the expense of people's health and lives also recalls Mr. Ripper's aesthetic.  Like Capitalism, Trump displays schizophrenic reactions, he can and does abruptly reverse or change course depending upon his mood and contingencies.  He's not Jack the Ripper all the time, but that character comes through enough to make him appear extremely, existentially dangerous when large amounts of human life sit in the balance.

Then we go to the chorus:

"Mama's in the factory she ain't got no shoes" - Health-care workers in the front line lacking sufficient Personal Protective Equipment.  Hopefully that's changing, yet we hear talk of a possible second wave, more likely sooner rather than later if social distancing lets up too soon, and we could be scrambling for more PPE again.

"Daddy's in the alley, he's looking for food." - More people than ever are lining up at food banks, most for the first time in their life.

" I'm in the kitchen with the tombstone blues." - In esoteric, or occult fashion this line actually signals the redemptive power of the song.

Dylan has received criticism over the years about being excessively cyncical.  In my view, he states and confronts problems, but then always, often mysteriously and cryptically, points to a solution.  Whether this comes from "Bob Dylan" or the Intelligence invoked into the song, I do not know, it seems to always appear, just not as obvious as the problem.

"I" - the source of active redemptive force, the presence of that kind of attention, love under will,
"am in the kitchen," - the place where you make food.  In certain esoteric communities, the kitchen is known as the heart of the community.  In this way, kitchen connects with Belle Starr.
"with the tombstone blues.  The blues inevitably feels redemptive to me, even blues chord progressions and rhythm without lyrics - the SOUND of the blues always lifts me up when it's right.  That's why you sing the blues, to change the mood of the current situation, to reterritorialize tragedy into something that feels better, something that can even feel good.

The other song that caught my attention on the drive was Highway 61 Revisited.  Highway 61 is kind of legendary for what has happened along it:  Bessie Smith was murdered on Highway 61, Elvis Presley lived and died very near there, Martin Luther King Jr. was assassinated right by it,  Bob Dylan was born close to Highway 61 and grew up near a different part of it.  In the song, it sounds like a place for the con games of Religion and Capitalism that inevitably lead to war.  We find an obvious redemptive stanza to the situation.

Bleaching, cleaning, out in the sun suggests a solution, but the most obvious occult counterforce to the challenges or tragedy on Highway 61 - which can also be considered as Chapel Perilous or the Bardo, comes in the stanza before:

"Now the fifth daughter on the twelfth night
Told the first father that things weren't right
My complexion she said is much too white
He said come her and step into the light he says hmmm you're right
Let me tell the second mother this has been done
But the second mother was with the seventh son
And they were both out on Highway 61."

The second mother expresses as Babalon (also the second He in Yod He Vau He) in Thelemic terminology, the human manifestation of the archetype of the first mother. 7 = Venus.  This line could represent the ON formula, the combining of male and female energies to produce some kind of love under will.

The are other lines on the album, even whole songs such as Like A Rolling Stone, or maybe ALL of them it seems now that I think of it, that easily fit the context of the moment.  It makes me wonder about music and its ability to jump over time - be just as relevant in multiple, different moments of time.