An Occult Response to Crisis 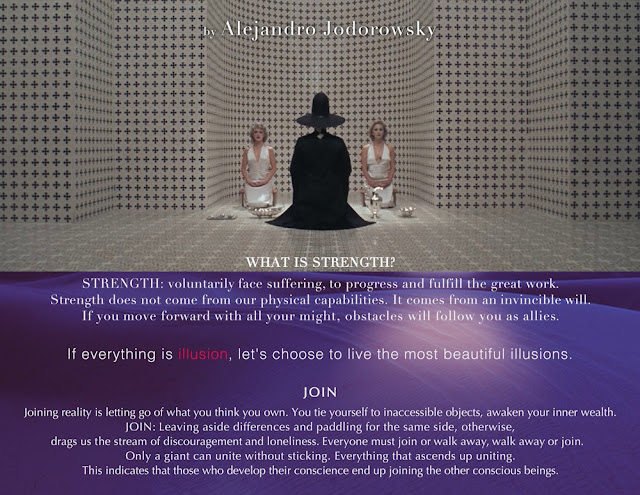 Jodorowsky is most well known in occult circles for his experimental films, The Holy Mountain, an abstract alchemical allegory, and El Topo, a journey through the desert of the Abyss.  He is also considered a Master of the Tarot.

He is calling for strength:

STRENGTH voluntarily faces suffering to progress and fulfill the great work.
This recalls and resonates with what Aleister Crowley called for during the height of Nazi dominance in World War II.  He wrote a one page document outlining the Rights of Man and called it Liber Oz.  Oz is an ancient Hebrew word that means both STRENGTH and COURAGE.  Immediately upon publication, Crowley mailed it to all the prominent people he had addresses for, his version of Facebook friends.  The liber was not only a call for strength and courage during the height of crisis, it also served as a Magical Act for Crowley.  He intended for change to occur.  Ten days after its publication, the Japanese bombed Pearl Harbor brining the Americans into the global conflict eventually changing the course of the war.

We may thus infer some probability that Jodorowsky's statement also intends to serve as a Magical Act, to cause change to occur.  We know his capability to express himself that way,

The second half of the message begins with JOIN.  It may be hard to see on my blog so I'll type the words below it.  First, Jodorowsky is a Tarot master so it seems likely to find correspondences in his communication.  JOIN = 140 = 14 x 10 = Venus x Malkuth, or love in the material world.

Joining reality is letting go of what you think you own.  You tie yourself to inaccessible objects, awaken your inner wealth.
JOIN: leaving aside differences and paddling for the same side, otherwise, drags us the stream of discouragement and loneliness.  Everyone must join or walk away, walk away or join.  Only a giant can unite without sticking.  Everything that ascends ends up uniting.
This indicates that those who develop their conscience end up joining  the other conscious beings.

The highway is for gamblers better use your sense,
take what you have gathered from coincidence.

- Bob Dylan, It's All Over Now Baby Blue


Coincidentally, shortly before the pandemic took off in the U.S. an international group of readers finished an examination of The Widow's Son by Robert Anton Wilson at the end of which he gives tips for pain management: good music, humor, and keeping a cheerful attitude despite the pain.

Inside this novel we find many confrontations with death.  Several times coincident with death I noted imagery connected to Tiphareth, the Grand Central Station on the Tree of Life and home of the heart chakra.  In esoteric research I have frequently seen this connection between death and the heart as if the latter solved the problem of the former.  The Egyptian Book of the Dead gives a notable example of this with instructions for the departing soul to unite with Osiris whose home is in Tiphareth.

Our society is currently confronting an atmosphere of death, literal in the prognostication of pandemic deaths and those who have already died.  Death, and the possibility of death blankets the mainstream media.  Also a figurative or metaphorical death that completely changes our life creating an unknown future.  All that death naturally opens the heart if it can get past fear to some degree.

Two very recent artistic releases seem an occult response to the current death crisis.  One, a new song by Bob Dylan,  Murder Most Foul, seems intentionally timed.  The other one, a release of a new edition of Ishtar Rising by Robert Anton Wilson seems coincidental, unintentionally very well timed.  This book offers many solutions to psychological and psychic survival in an atmosphere of fear and death.  These two artistic releases have connections beyond appearing at the same time.  Both communicate magic.

The magic appears quite obvious in Ishtar Rising.  I don't have the new edition, just ordered it, but do have the first edition of it from 1974 and believe the text is the same.  It was originally called The Book of the Breast and was published by Playboy Press.  Tom Jackson wrote a review outlining the differences here ,you can also order the new edition from a link there.  Breast connects with Tiphareth due to proximity with the heart chakra.

I haven't read it in a long time, but skimming through it, it obviously contains magic allusions and techniques.  The first words in the book are: "The words of magic, O my brothers: ..."  At the end of the first paragraph he quotes the final four lines from Ulysses by James Joyce, a very powerful incantation, it makes the connection between breasts and the heart evident and ends with "yes I said yes I will Yes." 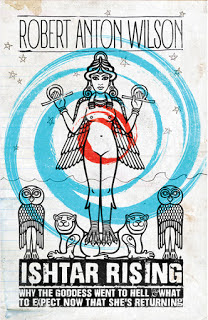 Dylan's Murder Most Foul, obviously conjuring death into the conversation, is a historical prose/poem with a soundscape centered around the Kennedy assassination.  He regards the death of JFK as the sacrifice of the Divine King in much the same way that Robert Anton Wilson does in Cosmic Trigger I leading me to wonder if the well-read Dylan read Wilson?

Like many historical pieces, this song reflects and responds to conditions of the current time.  The solutions it offer appear mostly musical and magical.

What's new pussycat
What did I say?
I said the soul of a nation been torn away
And it's beginning to go into a slow decay
And that it's 36 hours past Judgement Day

Wolfman Jack, he's speaking in tongues
He's going on and on at the top of his lungs

Wolf corresponds with Horus, the Crowned and Conquering Child.  Speaking in tongues suggests multiple layers of information.
"He's going on and on at the top of his lungs" produces the Thelemic formula ON.

A few lines later we find the band Queen with the lines:

The last two lines recall to me the Rosy Cross formula, yet another solution.

Continuing to (qabalistically) speak in tongues through his Wolfman Jack character, Dylan writes:

Lindsay Buckingham and Stevie Nicks were a couple who enjoyed tremendous success in Fleetwood Mac when the two of them were romantically involved.  This represents alchemy, the blending of disparate elements to synergestically produce something greater - thus giving another approach to a solution to the crisis.  The alchemy connection is shown in the previous two lines.  The path that connects the ninth Sephira Yesod to the sixth Sephira Tiphareth, the path of Samech, corresponds with the Temperance or Art (in the Thoth deck) card in the Tarot.

In his commentary in The Book of Thoth Crowley writes:

" ... and the card is (in its most simple and primitive form) a picture of Diana the Huntress.  Diana is primarily one of the lunar goddesses ... who is also the Great Mother of Fertility, Diana of the Epheseans, Many-Breasted. ( A form of Isis ...)

This path leads from the Moon of Yesod to the Sun of Tiphareth.  Crowley speaks of the alchemical mixture in symbolic terms: The Red Lion has become white, and increased in size and importance, while the White Eagle, similarly expanded has become red.  I mention this because a few lines earlier in Murder Most Foul Dylan alludes to the Eagles band and quotes their song title and lyric: Take it to the limit and let it go by.

Later in the commentary Crowley suggests a solution to a problem.  He puts a Latin inscription in the card that translates as "'Visit the interior parts of the earth; by rectification thou shalt find the hidden stone.' ... This 'hidden stone' is also called the Universal Medicine"   The whole commentary on this card in The Book of Thoth can be read for a better understanding of this.

As Jerry Cornelius points out, the path of Samech also signifies the Magical Link.  In a highly recommended piece appearing in ESSAYS Volume 8, On the Magical Link: On Art he employs the same alchemical metaphor Jodorowsky used:

"Once we have entered the Rainbow, our goal is to achieve the path of Art which is the next and most important stage to climb the Holy Mountain.  This is because it creates a Magical Link between you and your inner Star." - ESSAYS Volume 8, p. 16

Play it for Lindsay - Lindsay = 165 = "To make them know" and "An assembly."
I worked with Lindsay Buckingham very briefly, 2 days.  He's a tasteful guitar player. 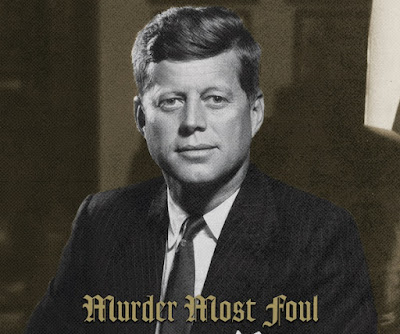 The end of this song shows connections between love and death.

Some of these read a little like Nostradamus' quatrains, don't they? The above alludes to the Star Tarot card.

At one point we are told:

The whole song is worth hearing and interpreting this way.  Dylan provides multiple levels of sense but I'll close it with this apt quatrain for the current predicament:

On Monday of the second week of social distancing I received the new book from Jerry and Erica Cornelius, CROSSING THE ABYSS and into the Aeon of the Daughter.  How perfectly timed, I thought, to see this title at this moment.  Society really seems to be crossing an abyss, definitely not the same one the book is about, but nonetheless a dissolution of society's collective ego - the way things normally are, and a journey through treacherous territory full of fear and illusion into the unknown getting stripped of everything you think you have or are in the process.

The subtitle tells what it's about: The magical story of Aleister Crowley and Charles Stanfeld Jones.  It's an extremely interesting and excellent book for those so inclined.  I will provide a lengthier review after I finish reading it.

I've come across a couple of things that align with this blog, An Occult Response to Crisis.  The first is a quote from Magical and Philosophical Commentaries on The Book of the Law found on page 75 in Crossing the Abyss:

To us the essence of Love is that it is a sacrament unto Nuith, a gate of grace and a road of righteousness to Her High Palace, the abode of peerless purity whose lamps are the Stars.

And this from Liber A'ASH vel Capricorni Pneumatici quoted on page 86 in Crossing the Abyss:

37. But the progress is progress, and progress is rapture, constant dazzling, showers of light, waves of dew, flames of the hair of the Great Goddess, flowers of the roses that are about her neck, Amen!


Jodorowsky calls for STRENGTH and says that it comes from an invincible will.  I am calling for COURAGE, something I need for myself to cheerfully navigate these days.