The Night I Gave Sting an ABD 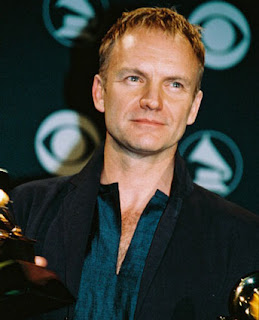 It was at an event to celebrate the opening of the new Jivamukti yoga center location on the corner of Laffeyette and Houston in New York. Jivamukti was, and probably still is, the trendy yoga spot in town, where celebrities like Madonna and Sting would go to do yoga. It is a very high class, high aesthetic, green facility with top notch yoga instruction.

I was there to mix sound for a group of musicians Bill Laswell had assembled that included Nicky Skopeltitis and Ravi Coltrane among others. Bill's connection to Jivamukti was through Janet Reinstra, who is a devoted student of yoga. Sting was also there to perform a set which MTV was filming.

For those who don't know, the ABD stands for American Book of the Dead, a book by E.J. Gold that consists of an ancient Tibetan Buddhist spiritual practice and teaching. The ABD is essentially a retranslation of the Tibetan Book of the Dead put into a Western cultural context.

Shortly after soundcheck, Sharon Gannon, one of Jivamukti's founders, was taking Sting around the room to say hello to people. I pulled out a brand new ABD I'd brought for just such an occasion, and when they got to me, I gave it to him saying something like, " this is in appreciation of all the great music and work you do." Sting gave me a kind of a quizzical look, looked at the book, said thank-you, and gave it to Sharon to hold as they moved on. Sharon gave me a look that I interpreted as a 'what the hell do you think you're doing' kind of look, but I knew Sharon and her partner David Life from back in my New York yoga days, so I figured she'd be forgiving, which she was.

Not long after that, a little drama played out where it seemed like Sting was trying to meet Bill, while I had the distinct impression that Bill was evading and avoiding him. Bill and I were hanging out in a storage room they'd put chairs in for artists to get out of the traffic. It felt kind of hidden and out of the way, but I guess it wasn't too hidden as Sting got wind we were in there. the next thing I know, the door opens and Sting slips into the room and quickly closes the door. You could almost hear him think, 'I finally got you!'

The meeting was short and light. Sting mentioned that yoga really helped with his singing. Bill acknowledged him. Sting then said something about wanting to do something musically with him and Bill agreed to talk about it in the future. Sting was very low key and seemed like a genuinely nice guy. Later on, Bill did an incredible remix of his song, A Thousand Years that's on the album Brand New Day - the Remixes.

The music went well that night despite an unconventional PA system in a smallish room not really designed for live music.

On the way out, I ran into actor Willem Dafoe and mentioned that we a had mutual friend, Evan Lurie, composer and ex-Lounge Lizard.
Posted by Oz Fritz at 11:58 AM