Dancing days are here again
As the summer evenings grow
I got my flower, I got my power
I got a woman who knows.
I said it's alright, you know it's alright
I guess it's all in my heart
You'll be my only, my one and only
Is that the way it should start?
- Led Zeppelin's Proust inspired lyrics

To be honest, I can't be certain that Proust had anything to do with these lyrics. Yet the fact remains that Zeppelin did name their music label Swan Song and the first volume in Proust's magnum opus, In Search of Lost Time is called Swann's Way.  Further, a swan song comes from an Ancient Greek phrase to indicate the last gesture, effort or performance before death.  Charles Swann, the character who provides the Way in the title is one of only two protagonists who die in the first four volumes of ISoLT – as far I've reached in my reading.  Swann's death doesn't get considered much, unlike the narrator's Grandmother, but we do get one poignant scene  in the third volume where Swann tells his friends the Guermantes about his poor health and limited time, the narrator grasps the gravity of the moment, but the Duc seems to not care and prioritizes rushing off to a party.  His wife, the Duchess, seems torn between the two positions, wishing to stay and talk to Swann, but being dragged away by her husband.  This turned out to be Swann's swan song in the novel.   Zeppelin's Swan Song began life as an unrealized epic instrumental piece by Jimmy Page before lending its name to their fledgling music label.  The irony of using a phrase indicating imminent death for a new record label may relate to Mr. Page's "reading and research" into the Golden Dawn and Aleister Crowley's Thelema which confront death full on with material from The Egyptian Book of the Dead among other sources.

I'm not aware of Proust using Kaballah in his writing, it seems coincidental that he uses a variant of the name Swann that includes an extra n, a letter that corresponds with Death in the Tarot.   The bird swan corresponds with the path of Daleth - Venus, the Goddess of love.  The mystically inclined, Qabalistically informed Jimmy Page likely enjoyed that pun for his bands record label.  Swan also corresponds to "Success in Bhakti yoga."  This line of reasoning may appear fanciful, however I'll demonstrate the relevance to ISoLT in due time, as we search for it.
Still, 12 pages in to the 4,215 page epic journey,  Proust makes death explicit and it involves Swann's father.  The narrator's grandfather tells the story of "the behavior of Swann the elder upon the death of his wife, by whose bedside he had watched day and night."  The grandfather went to visit the widower and "managed to entice him for a moment, weeping profusely, out of the death-chamber, so that he should not be present when the body was laid in its coffin.  They took a turn or two in the park where there was a little sunshine.  Suddenly M. Swann seized my grandfather by the arm and cried, Oh my dear old friend, how fortunate we are here to be walking together on such a charming day! Don't you see how pretty they all are, all these trees — my hawthorns ..."  The last line sounds plain, yet it actually telegraphs a major theme in the novel - don't you see how pretty all the trees and vegetation, the flowers and fauna, the foliage, the sky, the clouds, the way the drapes hang, and eventually everything animate or inanimate: Don't you see how pretty they all are? Wake up to the beauty all around.  Interesting that this affirmation of life comes in an interlude from death.  Indeed,  M. Swann goes on to say that it's good to be alive before suddenly remembering his wife and retreating back into grief.  The narrator expresses the inclination to negatively judge M. Swann until hearing his grandfather "exclaim, 'But after all, he had a heart of gold.'"
I had made my way through about  3/4s of Swann's Way before hunkering down for the pandemic lockdown. Preparations for the hermitage included picking up the next three volumes, Within A Budding Grove, The Guermantes Way and Sodom and Gomorrah.  A couple of weeks later, making my way through that Budding Grove, a band on Facebook offered to take requests to play a feel-good cover.  Dancing Days came to mind, I listened to Zeppelin's live version and experienced a strong resonance to the Proust of the moment. 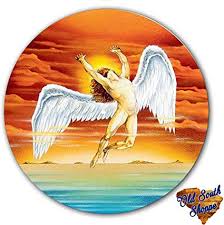 Swan Song label
The conflation of girls and flowers and the power this brings receives much attention in the second volume, titled, in the new Penguin Classics translation,  In the Shadow of Young Girls in Flower. The stage has already been set in Swann's Way with the walks he takes in the Combray section; the narrator gives extremely lucid, illuminated and detailed descriptions of nature scenes and flowers to the point of deifying them:
"But farther on the current slackened, where the stream ran through a property thrown open to the public by it's owner, who had made a hobby of aquatic gardening, so that the little ponds in which the Vivonne was here diverted were aflower with water-lilies.  As the banks at this point were thickly wooded, the heavy shade of the trees gave the water a background which was ordinarily dark green, although sometimes when we were coming home on a calm evening after a stormy afternoon, I have seen in it's color a clear, crude blue that was almost violet, suggesting a floor of Japanese cloisonné.  Here and there,  on the surface, floated, blushing like a strawberry, the scarlet heart of a lily set in a ring of white petals."
A common comment by people speaking of the effects they get reading Proust: it will change your life.  It can certainly change how you look at the world.  Flora and nature make a good example.  To see the plant life with the detail, depth and lucidity Proust gives them, to see them with enlightened vision becomes a spiritual exercise.  They used to say, take a psychedelic to see a vision that you then can learn to reach naturally.  With a close, attentive reading of Proust, no need for the psychedelic.
To give one example amongst several available, in Volume 2, the adolescent narrator has his attention captured by a group of young girls in the coastal resort town, Balbec. "Never among actresses,  nor among peasants,  nor among girls from a convent school had I beheld anything so beautiful, impregnated with so much that was unknown, so inestimably precious, so apparently inaccessible.
... But in that case I could only blame the compulsion of a law of nature — which if it applied to these girls would apply to all — and not the imperfection of the object.  For it was that which I should have chosen above all others, feeling quite certain with a botanists satisfaction, that it was not possible to find collected anywhere rarer specimens than these young flowers ..."  he goes on to describe the girls as blocking his view of the sea while watching a steamer slowly pass through them "like an idle butterfly dawlding in the cup of a flower."  If looking at this archetypally, which he invites the reader to do, the fire of the obvious sexual attraction combines with the water of the sea and the receptivity of the flower cups slowly produces the alchemically motive power of steam, like a butterfly - transformation.  Flower power indeed!
Two contemporary writers and researchers of the occult, Robert Anton Wilson and Kenneth Grant advertised this line of flight.  In hist first novel, Illuminatus! written with Robert Shea they use the slogan Ewige Blumenkraft, German for "flower power forever" as a password for the Illuminati.  In trying to decipher why they used this phrase, the Wikipedia Intelligence suggests it seems likely a joke, a poke at the hippies, but they also say: "Another possibility is that the rose and lotus flower are an important symbol of spiritual development in both the western and eastern mystery schools."
Kenneth Grant takes it further with his ideas about kalas, sacred emanations, a strong presence in his books Aleister Crowley & The Hidden God and The Magical Revival.  In chapter 7 of the latter, titled Star Fire,  Grant writes about zones of energy on the body:  They are symbolized generally by the lotus which is the typical flower or flow-er; the flowing that one gathers together all the mystical essences, "stars" or kalas, of the human body... The Lotus comprising all these currents, all these essences, flowers in the  emanations that flow from the priestess.  It is with these subtle emanations, magnetized by appropriate manual passes as they travel along the occult arteries of the invisible anatomy, that the rites are performed and the magical talismans consecrated.  ... kala also means time.  Time and periodicity are associated with the lunar cycle of the female."  Bringing us back to In Search of Lost Time.
In 1918 C. S. Jones,  aka Frater Achad composed a document known as Liber 31 that purported to show the Key to The Book of the Law, then known as Liber Legis and sent it to Aleister Crowley.  Crowley accepted this as the key, changing the name of Liber Legis to Liber AL vel Legis to reflect the new information.  AL = 31.  Crowley's response to Achad said, "Your key opens Palace.  CCXX (The Book of the Law) has unfolded like a flower."  Achad later became known for declaring that the feminine Aeon of Maat arrived shortly after Crowley died.  You could call that wishful thinking, I think it hasn't arrived yet.  The point being that Proust, busy writing ISoLT at the time, may have tapped into an occult current that may have helped inform his work.
My love she laughs like the flowers, Valentines can't buy her.
- Bob Dylan, Love Minus Zero/No Limit 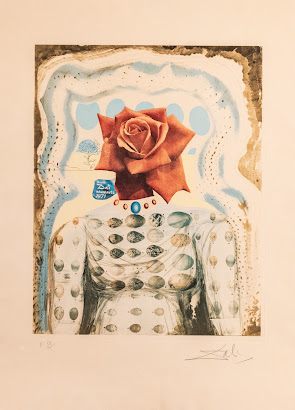