May the road rise with you ...

Ginger Baker, one of the best and most influential drummers of any genre died and left his body October the 6th in Canterbury, England.

Ginger was a force of nature, there was no one like him on or off the stage. 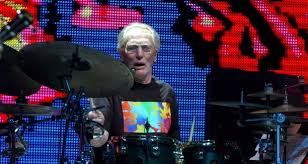 I wrote much about him when reviewing the Beware of Mr. Baker documentary

Ginger might be best known to the general public for his work in Cream.  I was very fortunate and blessed to witness his playing in another trio, in some ways, more powerful than Cream.  Ginger Baker, Bill Laswell and Foday Musa Suso.  Soon after beginning work with them, at one of the first shows, I had an awakening moment, a strong realization that this was on a whole other level. Worlds created and destroyed while you listen, that's what Ginger brought to it. It was an ideal combination.  Ginger was in the control seat that established the time.  His African sensibilities perfectly complemented Suso's timeless griot melodies while Bill's seismic low end viscerally glued the sound and shook the earth.  The synergy of all this remains indescribable in words. Two tours of Japan; on the first, this trio also had Anton Fier on the Fairlight synthesizer; the second tour was the full Material band with percussionist Aiyb Dieng, Bernie Worrell on keyboards, and Nicky Skopelitis on guitar.  Ginger brought a certain kind of unpredictability to the proceedings which were already unpredictable just by their nature.

Out of the thousands of studio projects I've engineered, Middle Passage by Ginger Baker is at the top of my list with only a few others.  It has extreme power beyond the human realm.  The drum solo piece, Basil, remains the most innovative drum solo/electronics piece I've ever heard.  The only other one that comes close is Led Zeppelin's Moby Dick.  Except for Basil, the album was made by Ginger improvising drum tracks that Bill Laswell and Nicky Skoplelitis turned into instrumental songs.  Ginger's presence seems so strong as to help invoke these extraordinary tracks in his name through the sympathetic resonators of Bill and Nicky's melody compositions and other musical improvisers.  In other words, the fact that this record was for Ginger influenced the invocation in mysterious and magical ways that wouldn't have occurred for anyone else.

I wish him all love and good wishes on his journey.