"How about letting go," Winsome said after awhile. "Aren't your arms getting tired?"

Pig admitted they were. "Did I ever tell you," Pig said, "the story about the coke sacker, the cork soaker, and the sock tucker."

Winsome started to laugh and with a mighty heave, Pig brought him back over the low rail of the fire escape."

"... of their arrival in Sicily and the difficulty with local bandits on the mountain road (from which Stencil extricated them by telling foul Sicilian jokes ...)" - ibid. p. 444

Undoubtedly, another reason Timothy Leary loved Gravity's Rainbow so much is because it's so damn funny.  From surrealistic absurdity to outright slapstick hi-jinks, Pynchon infuses his horror show with jokes ranging from the ridiculous to the ever more ridiculous (the ridiculously ridiculous) to the sublime.  We get more than a few groaners along the way.

Pynchon communicates qabalistically, the lingua franca of any serious occultist, and qabalists burn the candle at both ends, linguistically speaking.  In other words, they consider the opposite, the reversal, the mirror image of any image, trope, word, or ideogram.  They look at the whole, forwards and backwards. Take, for instance, the character of Frau Gnahb, whose last name in reverse reflects a substantive tenor of the times the book was written; Gnahb with reverse spelling = Bhang, a potent cannabis product from the Indian subcontinent.  Frau, in backwards.qabalese: u = you, a = a, r =  Resh, F =  Hierophant.  Her son's name, Otto, reads the same in either direction.  The opposite of gravity = levity and we get plenty of elevated levitation in Gravity's Rainbow.

Humor not only makes for a fun diversion and light way to pass time, it can and should become a potent weapon in the shaman's arsenal. I once received an assignment to do some research at the Museum of Natural History in New York that required accessing archives not usually available to public eyes.  I got advised: humor will get you past the bardo guards.

A literary classic that greatly influenced GR, a magical precursor if you will, Don Quixote, by Miguel de Cervantes, remains possibly the funniest serious book of all time.  It boasts the most erudite fart joke ever written according to the Guinness Book of World Records.  The central theme in that book, fearlessly living up to seemingly unreachable ideals, to dream the impossible dream, requires much humor to get through the inevitable and constant setbacks and obstacles.  Compare that to Timothy Leary's answer in a jailhouse interview when asked if he was trying to change the world. Spoken in his light, jovial tone, "Yes, sure, we were trying to change the world.  We knew we were outnumbered and the odds were against us, but we had a sense of humor about it."

It seems no coincidence that the most highly intelligent individuals of modern times appear wickedly funny.  Aleister Crowley and one of his most distinguished magickal heirs, Robert Anton Wilson, became masters of the put on.  When I saw Timothy Leary speak at a South Street Pier nightclub in the early '80s, he billed himself as a stand-up philosopher.  Robert Anton Wilson plied the same trade at his speaking engagements.  Humor becomes a major part and parcel of the conspiracy of Intelligence.  At its best, it acts as a carrier wave for the transmission of esoteric data.  One only need watch Marx Brothers films with a receptive mind for conclusive evidence of this.

After a heavy, dark and scary bardo opening in Gravity's Rainbow we meet the first character, Capt. Geoffrey ("Pirate") Prentice who has a passion for bananas, growing them and using them in very creative ways: "tall cruets of pale banana syrup to pour oozing over banana waffles, a giant glazed crock where diced bananas have been fermenting since this summer with wild honey and muscat raisins, up out of which, this winter morning, one now dips foam mugsfill of banana mead . . . banana croissants and banana kreplach, and banana oatmeal and banana jam and banana bread, and bananas flamed in ancient brandy Pirate brought back last year from a cellar in the Pyrnees also containing a clandestine radio transmitter . . ." (p. 11) He grows bananas on a rooftop in England during the height of the Second World War and makes banana breakfasts so famous that people from all over England come to partake. Talk about surrealistic absurdity. Pynchon even throws in the classic slipping-on-a-banana-peel joke. 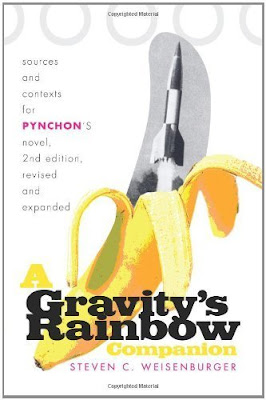 A good example of the ridiculous co-mingling with the sublime occurs, right after we meet Pirate, as an introduction to the banana fugue:

Bloat is one of the co-tenants of the place, a maisonette erected last century, not far from the Chelsea Embarkment, by Corydon Throsp, an acquaintance of the Rossettis who wore hair smocks and liked to cultivate pharmaceutical plants up on the roof (a tradition young Osbie Feel has lately revived), a few of them hardy enough to survive fogs and frosts, but most returning, as fragments of peculiar alkaloids, to rooftop earth, along with manure from a trio of prize Wessex Saddleback sows quartered there by Throsp's successor, and dead leaves off many decorative trees transplanted to the roof by later tenants, and the odd unstomachable meal thrown or vomited there by this or that sensitive epicurean - all got scrumbled together, eventually by the knives of the seasons to an impasto, feet thick, of  unbelievable black top soil in which anything could grow, not the least being bananas.  Pirate, driven to despair by the wartime banana shortage, decided to build a glass hothouse on the roof, and persuade a friend who flew the Rio-to-Ascension-to-Fort Lamy run to pinch him a banana sapling tree or two, in exchange for a German camera, should Pirate happen across one on his next mission by parachute. (p. 5 - 6)

That roof has seen a lot of action!  I have discovered Pynchon often uses fog as a code word for death.  There was fog on the road when Richard Farina, to whom this book is dedicated, tragically died in a motorcycle accident.  "... a few of them hardy enough to survives fogs and frosts" also translates as surviving death and emotional shutdowns.  The phrase "dead leaves" might possibly be in homage to James Joyce.  In the Tales of the Tribe online course, Robert Anton Wilson wrote of the multiple instances of "leaves" as a metaphor for death in Finnegans Wake pointing out that Joyce knew he was close to death as he completed his opus; death = to leave behind.

Laughter is the best medicine.  It works as a rescue remedy in a variety of tense or dire situations.  Pynchon gives an example in the opening quote to this section of a joke preventing a suicide.  Humor lifts the mood and mood guides us through inner emotional states, for better or worse.  In Gravity's Rainbow Companion, Steven Weisenburger maintains and demonstrates that Pynchon wrote some elaborate narrative subplots for the sole purpose of telling a joke.  Charles Hollander goes further in his short, excellent essay, Jokes and Puns in Gravity's Rainbow, first suggesting a doctoral dissertation on the typology of jokes and puns in the book, then pointing out some of the subtle and elaborate humor, while concluding:

Pynchon (somewhat like Woody Allen) uses most of his narratives as armatures on which to hang jokes, puns, discursions, meditations, allusions, quodlibets, etc., about thematic issues that repeatedly concern him: "power" and "unreason" (Pynchon, WSR 29), the relation of individual and state. The more elaborate the joke, the more likely it is to be thematically important; the more seemingly removed the passage is from the manifest issues of the text, the deeper we may have to look to find the referent. Since text and subtext in Pynchon’s fiction take turns carrying the thematic charge, we have to keep our magic eye peeled to, as the narrator tells us at the end of Gravity’s Rainbow, "Follow the bouncing ball" (760).