How do you raise the consciousness of the planet? How do you make this a better place to live? How do you bring people together, mend divisions and encourage processes of creative problem-solving that affirm life?  Many attempts to answer these questions get tried everyday in large and small ways.  I saw a play the other night that, among other things, gently introduced the audience to a world of magic. 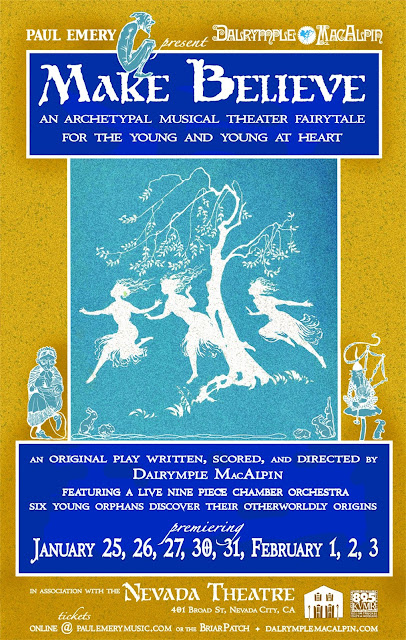 Some theater offers an Initiation, some seeks to entertain, Make Believe does both.  It very explicitly offers the key to magic.  From the Author's Statement:

Children grow up believing whole-heartedly in the most unbelievable things.  So how is it we ever lose faith in the power of our imagination?

My wish with Make Believe is to remind the audience that magic not only exists, it also contains an inescapable soul, which has actually never left us.

It's my experience that this musical play is an extremely effective portal into other domains of reality often considered inaccessible or nonexistent.  If that sounds scary, and it probably should, well ... it's a mere fairy tale.  As Herman Hesse famously wrote in Steppenwolf: "Magic Theater - Entrance Not For Everybody.  The great thing about this kind of voluntary Initiation is that you can jump into the waters, so to speak, as much or as little as you like, or as you can take.  Just because you discover a quantum wormhole into an alternate dimension doesn't mean that you have to jump in.  Simply enjoy the view of things outside common sense reality.

Multi level stories generally contain puns and other literary tricks.  Make Believe is no exception starting from the subtitle: "An Archetypal Musical Theater Fairytale For The Young And Young At Heart," because it also plays to the Jung at heart.  It contains a strong Jungian component exemplified by a quote from Carl underneath the Artist's Statement: One does not become enlightened by imagining figures of light, but by making the darkness conscious.

This play rewards attention, the more you bring to it, the more immersed and inside of the story you become.  MacAlpin's language often expresses itself as riddle or rhyme and does not really sound of this century, however following closely draws you in while contributing to the otherworldy atmosphere of the space. 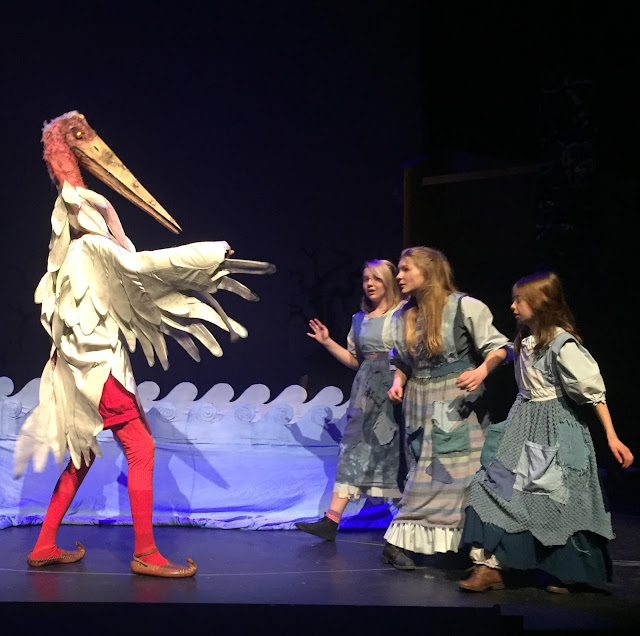 I had the pleasure of working with MacAlpin in his previous incarnation as the primary force behind  the esoteric folk (think of Pentangle) Lasher Keen who described their music as inspired by ritual induced trance states.  We recorded, mixed, mastered and released their 2014 album Mantic Poetry Oracular Prophecy.  He is a dedicated multi-media artist spending three years composing and producing the music for Make Believe going so far as to pick up a formal education in music theory, composition and orchestration as part of the creative process.  In his bio he mentions that he also studied traditional Czech marionette carving at the prestigious Puppets in Prague institute. "This skill he expounded upon in order to carve a vital and living consciousness into his very first puppet, Rumpelstilzchen."

All aspects of the production of the play were amazing and highly professional: the acting, the music, sound, set, lighting, costumes, etc.  It was of a quality and calibre you expect to see from theater in New York or London, although perhaps it gained some mystique and magic from the resonance of opening in Nevada Theater, the oldest active theater west of the Mississippi, site of some of Mark Twain's first public lectures.

One of the most effective moments for me happened in the song, The Blessing of Pan.  There was a slide projector showing various iconic images of Pan revolving around the backdrop while Pan did his number about rescuing one of the children.  I flashed back to my previous adventures with Pan recording the music of Jajouka in Morroco's Rif Mountains while they did their ritual to the ancient God.  I wasn't surprised to read in the bio of Angela Holm, the Assistant Director and the person doing the projections, that "She likes exploring esoteric communication through the mysterious process of capturing image, in particular the aura of the unexpected that can happen through optical mechanics.

Synchronicities of a particular intensity seem to indicate contact with something, some force or Intelligence of one kind of another, much bigger than yourself.  They can appear as an affirmation of being on the right track or going in a productive direction.  After Dalyrmple began writing this story about 6 archetypal sisters exiled from their Mother and home by their evil Uncle, he discovered that in actuality a family with 6 sisters were neighbors to the Grimm Brothers.  Many familiar fairy tales such as Sleeping Beauty and Cinderella and several others were originally told to the Grimm Brothers by those sisters.  When you begin writing about archetypes then discover that the form you're writing about already had a major impact on folklore, then to me it seems more an issue of tuning in to some kind of current than of making something up from scratch; technically known as Invocation.  Make Believe appears a strong and successful Invocation.

This post is too late to convince anyone local to catch the play while they can.  As of this writing, there are only two more performances, tonight and tomorrow.  Its intent is to communicate the delight, great pleasure and spiritual value of Make Believe continuing on for future runs.  A special shout out to Promoter and Producer Paul Emery for having the vision and daring to make the initial run possible, much respect!  For more information check out www.dalyrmplemacalpin.com

"So let us commingle and conjoin with the shadowy contortionist of our nightmares and the imaginary friend who is our guide. They are there for a reason." 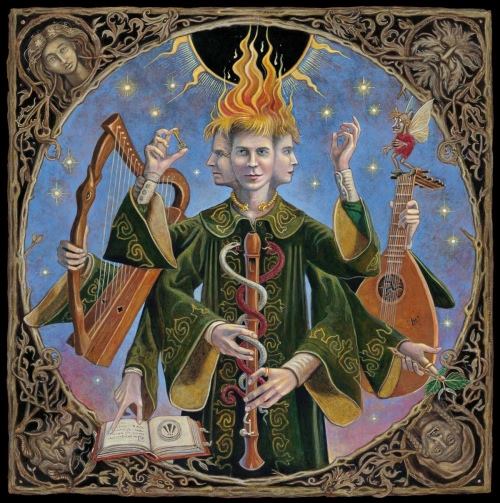 Original painting by Benjamin A. Vierling
Posted by Oz Fritz at 4:29 PM