Look out honey 'cause I'm using technology,
Ain't got time to make no apology.
Soul radiation in the dead of night,
Love in the middle of a fire fight ...

- The Stooges, Search and Destroy, from the album Raw Power

This Dante quote was used by Aleister Crowley as one among many to preface his story The Wake World found in the book Konx Om Pax - Essays In Light.  It translates as:

The Wake World is a qabalistic allegory disguised as a children's fairy tale that Aleister Crowley wrote for his daughter Lola Zaza.

The origin of the phrase Konx Om Pax remains unknown.  It was said to have been given to candidates who had reached the degree of seer in the Eleusinian Mysteries of Ancient Greece upon their departure back into the world.  MacGregor Mathers, founder of the Golden Dawn, traces it to ancient Egypt with the meaning:  Light in Extension.

A few thousand years later, Konx Om Pax took on a musical expression with two performances by John Zorn and Bill Laswell at the Chapel in San Francisco's Mission district this past Friday and Saturday.  Their music made audible forces manifesting the science and technology of the Eleusinian Mysteries, the Golden Dawn, and Aleister Crowley's system of theurgic magick to give a few names to this multiplicity.  Zorn and Laswell's saxophone/bass duo tied in directly to this ancient lineage. Some say this lineage derives from Sumer, the oldest civilization known to recorded history. 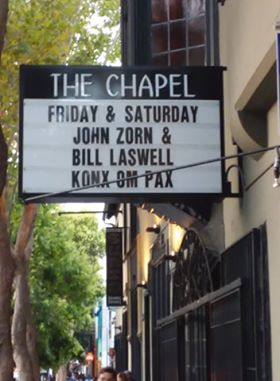 The Zorn/Laswell musical alliance resumes a dialog that began decades ago and will continue into the forseeable future seemingly touching upon everything under the Sun at one time or another over the years past and future. The shapeshifting moods evoked by the music  the night I was there, ranged from a carefree stroll through a pastoral countryside to the apocalyptic blast of an atom bomb explosion.

The musicians appear a stark contrast contrast both visually and sonically joining forces onstage to form a disjunctive synthesis.

Deleuze enters the equation because, as I have written in several previous posts, he provides the metaphysics for Crowley's Thelema. Deleuze also applied Paul Klee's famous quote, "Art does not reproduce the visible; rather, it makes visible," to music writing that music makes audible forces normally not heard. The forces driving Konx Om Pax were given a vehicle to manifest at the concert Friday night.

On the right side of the stage from the audience perspective, Bill Laswell plugs his fretless Fender Precision bass into an array of foot pedals that connect to a classic Ampeg  SVT amplifier wired to 8 x 10 and 1 x 15 speaker cabinets.  The pedals twist, turn, contort, distort, harmonize, metathasize and synthesize the timbre of the soundwaves creating a new landscape, a new space, a new dimension every time a footswitch is engaged or turned off.  A pallette of sonic worlds to choose from.

The left side of the stage is completely bare of equipment except for a mic stand holding an Electrovoice RE 20 microphone and a chair never used except as a foot rest.  The sole sound generator here is John Zorn and his well-traveled alto saxophone.  Despite the lack of electronics he achieves a great deal of variability with his sound through mic positioning and how he uses the instrument, in particular, the mouthpiece.  For example, a muted sound comes from holding the bell of the sax into his leg. 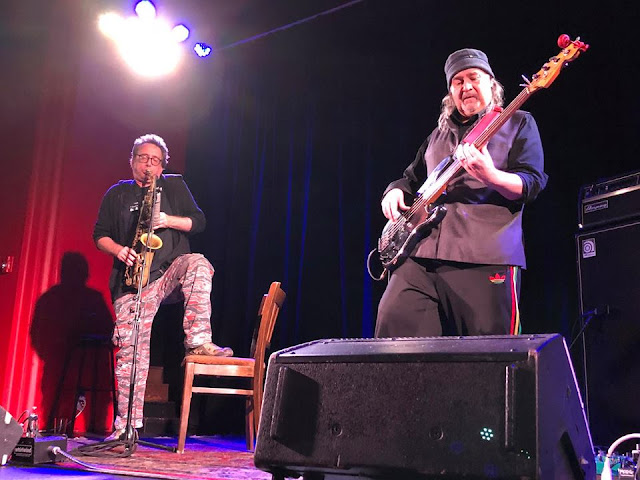 At times it seems like the sax phrases become the thread  that guides the listener through the sometimes massive, sometimes delicate, labyrinth of landscapes expressed by the bass guitar and electronics.  But like anything having to do with Qabalah, the roles can and do get reversed with the bass melodically threading its way through a labyrinth of saxophone landscapes.  At one point I heard Bill quote the theme from Ornette Coleman's Dancing In Your Head which references a whole line of music.  For me, it conjures the Master Musicians of Jajouka because there is a track of Ornette playing with them on that album.  Coincidentally, I was wearing a Material/Master Muscians of Jajouka shirt.  This musical quote introduces what Gurdjieff called a shock - energy coming in from a different octave, a different series of becoming.

Zorn does these repetitive phrases of short scale runs that demonstrate what Deleuze means by difference and repetition: every cycle repeats the phrase yet it's slightly different each time.  He may sustain the last note slightly longer, the attack may be different, different degrees of intensity etc.  These differences in the repetitions allow something, a force of some kind to grow and develop; the process of creation.  The listener who has the attention and focus to hear these differences  will find themselves drawn deeper into the music and taken further.  It seemed that the audience had this intensity of focus the night I was there.

That was Friday night.  I was in the neighborhood so dropped in and offered to help with the sound reinforcement.  The Front of House mix engineer operates the sound system to bring sound in extension, extending it from the stage to the entire house.  Despite having two of their sub woofers down, the Chapel had a powerful and clean public address system that covered the entire venue well reaching all the way up into the back corners of the balcony.

There are other ways to extend the music.  This is what the science and technology of the opening quotes refer to.  Having the ability of uniting the microcosm with the macrocosm  (or at least having the wherewithal to try) the instigator of theurgic magick can extend the atmosphere of the space much further than the immediate environment the music plays in.  The uniting of the microcosm, in this case Konx Om Pax playing at The Chapel with the macrocosm of the World, starting with San Francisco and expanding out, is one function of what Thelemites call The Knowledge and Conversation of the Holy Guardian Angel. This is an operation that originates in Tiphareth.

To some degree, every human sensitive to the music resonates in this way.  By the Hermetic formula, "As below, so above," every human becomes a microcosm of the Universe. Anyone who tunes in to the music to such an extent that they temporarily lose most or all vestiges of personal identity carries and extends the music into new domains.  The effects of the music also extended into the financial domain.  Some of the proceeds from these concerts were donated to the immigrant family reunification crisis. Konx Om Pax.

So that all life, animal and vegetable, seems in its essence like an effort to accumulate energy and then to let it flow into flexible channels, changeable in shape, at the end of which it will accomplish infinitely varied kinds of work.  - Henri Bergson, Creative Evolution.

And now for something completely different.

The interior of the Chapel, the walls and ceiling, was entirely a solid bright red. Having the arched roof of a former place of worship, it reminded me of a gothic kind of Hell.  The backdrop was a solid blue curtain and the lights illuminating the stage were mostly blue which visually cooled down the red hall.  There were no logos, grafitti or words of any kind in sight.  No words were spoken by Zorn or Laswell.  Kill the word.  The night was free from standard semantic symbolism allowing the communication of a whole different language, a language expressed in music.

The  above quote from Dante that Crowley uses in Konx Om Pax is from the 6th Canto of Inferno when Dante and Virgil enter the 3rd circle of Hell. Inferno is a guided tour of Hell.  Hell, according to Crowley, is what qabalists call the space/time physical universe which sets up a paradox because it can also get perceived as the Garden.  Why is God in Hell?

The music Zorn and Laswell invoked became a Guide through the Land of the Dead, for those lucky enough to die to their personal story for the duration of the show.. They took us on a journey, one that was very dynamic, it went to different places at varying speeds and intensities, but never completely stopped until the end.  They played about 56 minutes straight through.  I heard someone mention circular breathing which also recalled The Master Musicians of Jajouka for me as they also go on for long stretches of time thanks to circular breathing.

The music this night was not composed or planned in advance.  It appeared as it happened in the moment through intention and necessity entering perceptible existence through a pure gesture of artistic expression.