Atomic Love Bomb and other Synchronicities

We are in the dog days of summer, I'm active in a Cosmic Trigger online discussion and Coincidence Control is working overtime (over time) on the case.  Cosmic Trigger, for those who may not know, is a richly entertaining classic in the literature of High Intelligence and Alchemical Transformation.  Among its multiplicities, the various avenues of spiritual research author Robert Anton Wilson reported on in the book, is a look at synchronicities, meaningful coincidences - but meaningful for what?  Wilson reports on the '23 enigma,' a phenomena he first heard about from William Burroughs where the number 23 pops up more often then usual and in surprising, unexpected ways. Wilson compared his experience with the 23  enigma to the key for cracking the genetic code of DNA.  This insightful observation suggests paying more attention to coincidences as a form of spiritual guidance.  Cosmic Trigger is perhaps the first, and still one of the only philosophical treatises I know of that valorises synchronicities, but not without much cautious skepticism.  It's also one of the most lucid and rational introductions to the work and mission of Aleister Crowley - to turn the switch ON i.e. illuminate the world.  Not only does it make Crowley's work known, Cosmic Trigger provides key data for penetrating into and practically applying this work such as the enigmatic Knowledge and Conversation of the Holy Guardian Angel, or, as I call it, the lazy person's approach to finding a spiritual guide.

Went to look at studios yesterday.  When asked how long he'd been in business, the first studio owner replied, "almost exactly 23 years." One meaning of 23 = "a new life," which bodes well for a new project - see the Iggy Pop quote below. As we were meeting the second studio owner, he heard a hawk cry above us and mentioned it in the introductory flow.  Hawks are familiar to me as a symbol of the life force; the will-to-power as the power to create or heal. The hawk-headed God is Horus.  The first time I experimented with invoking Horus was in a hotel room in Zurich.  After the ritual, I turned on the television to find a documentary on Horus in English; synchronicities as affirmations.

Joe Mitch brought his neo-psychedelic, alternative rock band, The Atomic Love Bombs into Ancient Wave a few weeks ago to record their next album.  Up to this second, I thought they were called Atomic Love Bomb thinking one was enough, but plural atomic love bombs couldn't hurt in these troubled times.  As Spinoza put it, passions and feelings directed by reason create affects of active joy that increase our ability and power to act; love under will. "The word blessedness should be reserved for these active joys: they appear to conquer and extend themselves within duration.", (Deleuze, Spinoza, Practical Philosophy p. 51) Love under will means that these affects can get directed. Spinoza's first name, Baruch, means blessed.

Joe was familiar with Cosmic Trigger.  He also had the air of connection with some kind of occult conspiracy though I don't know exactly what.  It could also be my projecting imagination, nevertheless, it cannot be denied that for three days, just before the solstice in June, visionary music of a powerfuly affective nature found its way out of the virtual and into the audio reproduction realm courtesy of the Atomic Love Bombs assemblage.  Guitarist Rich Williamson had a style that reminded me of Gang of Four, Joy Division, and Sisters of Mercy really raising the energy level in thoughtful riffing trance.  I had specific lyrics and song titles to quote, lost those notes.  I do remember the first song suggesting to build a sun machine.  That should give an idea of our shared vision. 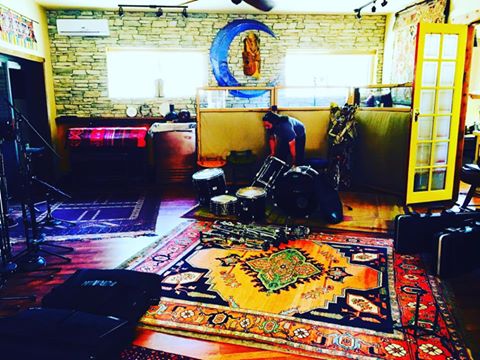 To get a vocal sound I asked singer Courtney Ballardo to sing a verse acapella.  She surprised me with the first verse of Leonard Cohen's Hallelujah, a song that carries a powerful association with death, for me.  The first time I really heard that song occurred when mixing a cover of it by West African artist Wasis Diop on 1/11/07, the day Robert Anton Wilson died.  I didn't know that until afterwards, yet when mixing the song, I felt a strong sense of sacredness and holiness every time the chorus played; didn't even understand the lyrics in the verses, they were in French.  Not much later, I heard Jeff Buckley's version tastefully used in a death montage scene in the television show West Wing.  The best version of Cohen's Hallelujah, for my money, is the one Courtney sang for Atomic Love Bomb for this new lp.  Segue to an Iggy Pop quote: "A good lp is a Being, it is not a product.  It has a life force, a personality and a history just like you and me.  It can be your friend."  This is what their lp is shaping up to become.

Three days before getting keyed into the memory of Robert Anton Wilson's death through Hallelujah, a post appeared on the RAWIllumination.net blog called RAW's Poignant Goodbye. One week later, a very close friend died. It was expected, but still surprising and very shocking when it happened. Synchronicities can prognosticate though often that can't be seen until after the fact.  I listened to a synchronicity 22 years ago and rushed to a hospital in Canada to spend one last night and a moment in the morning with my father before he transitioned 12 hours later post-surgery.

After one of those horrific school shootings a few years back I wrote a position paper advocating for occult atomic love bombs, in so many words.  It also presents a scientific argument for spooky action at a distance.  I absolutely had to respond at that time, it seemed like emergency conditions.  Looking at the news of the latest tragedy in France coupled with the racial violence in America ( and all the rest of it)  brings up the same necessity to respond.  By "atomic" it means not so much a big explosion, but the supposition that magick occurs on the atomic and subatomic scales.  Magick finds material explanations in some models of quantum physics.  Magick finds verification through experimentation and observation.  Tell someone (verbally, emotionally, thoughtfully, musically, etc. -however you communicate) across the country, or across the ocean or across the room that you love them and you've practiced love under will.  It doesn't have to be a big explosion - to quote Led Zeppelin, "everything that's small has to grow, and it always grows."

I mixed a set for Ma Muse at the World Music Festival today, we went on at 10 am.  One of the songs they did for soundcheck was their song Hallelujah, completely different than Cohen's though equally as poignant and moving.  When they opened their set with a song sounding like a prayer or invocation, I had the sensation that all activity in the fairgrounds, all activity known to me, stopped and was listening silently.  There had been a loud soundcheck happening and lots of chatter immediately prior that all suddenly stopped.

They didn't play this today, but it fits the theme of this post, so I leave you with this: