Bernie Worrell could play keyboards like Jack Kerouac could write or Robin Williams could do comedy, it flowed out of him spontaneously and effortlessly.  It was almost always brilliant the first time, first take.I don't remember doing a lot of retakes with him.  He was a master of improvisation, only it didn't seem like improvisation more like tapping into an immanent field of musical choices  he could directly access.  He was a storyteller in song.  This was demonstrated in the many concerts he opened with a 10 - 15 minute tour of the musical universe quoting a range of references from Bach to Cosmic Slop, from Monk to the theme from Ghostbusters, or the current top 40 pop hit.  It always sent you on a journey at the speed of sound, musical affect and the imagination.

Bernie makes a good argument for reincarnation.  He gave his first concert at the age of 4, wrote a piano concerto at 8, and performed with a Symphony Orchestra when he was 10.  These two quotes from an excellent interview by Torsten Schmidt candidly describes Bernie's approach and talent in his own words:

I don't deal with realization. I was born with perfect pitch, so anything I hear I can play. Whatever the gift God gave me, I don't sit and decipher; I just do it. And the way I hear - everyone has a different way of hearing - so the way I hear, I can hear the relationships. I can hear the same scale or mode in a classical piece, you can find the same mode in a gospel hymn. Same mode in a Indian raga, same mode in a Irish ditty, same mode in a Scottish ditty, or whatever you wanna call it. Same mode in Latin music, African. It's all related. It's how you hear it. And then on hearing and recognising, "Oh, yeah. I heard that in a pop song." Same chord progression, you know? Everything is related. I just happen to be able to hear that.

Bernie on his influences:

I didn't look up to them, I was influenced. No one should look up to anybody. What's that mean? OK, Ray Charles, Keith Emerson, Thelonious Monk, Herbie Hancock. Victor Borge, he was this Danish keyboardist who's one of my favorite, my antics on-stage now, where I get a lot of my stuff from, because he'd be a serious classical piece and then fall off the bench. Just stuff. And that's my other way of... I guess... so serious. Have some fun. Put some humor into it. That's what I like to do. I play, ’Nah nah nah nah', in the middle of a classical piece. I'll do it on purpose, just to, "Man, wow, where'd that come from?" Make you think. "Don't be so uptight, we have a song now. If you want things to be alright, stop being so uptight and move on." Part of the uptightness in you, if you don't let it go, you're gonna be... It's like a P-Funk song: "Free your ass and your mind will follow" Breathe

Bernie had a thing for purple, always wearing either a purple scarf, hat, jacket or something else.  I don't know why. He was wearing a purple cowboy hat when a small group of us went to Disneyland in Tokyo. Spike Lee was criticized for wearing a purple outfit to an awards ceremony a day or two after Bernie moved on. The media reported as being a tribute to Prince, but I suspect it was just as much an homage to G. Bernard Worrell Jr.

Coincidentally enough, today I read a summary of Goethe's color theory and how figure comes into existence:

From Goethe's color theory, then, we can extract a three-tiered genesis of the visible, a passage from an invisible, blinding pure light, through an indistinct halo or atmosphere of black and white to the colors and contours of distinct figures, white darkening into yellow, black into blue, yellow and blue reaching their maximum intensity in purple.
- Ronald Bogue, Deleuze on Literature

Purple is the royal color.  It served as an important signifier in the magick I used to become a better engineer; it corresponds on the King Scale to Mercury, the Roman trickster god of communication and psychopomp to the dead.  Bernie could be a trickster.

Worrell moves to the organ and plays a long, improvisational sequence that blends big dynamic moments with nursery rhymes and other musical references, ending with snatches of "Let It Be" and "The Wind Cries Mary." Worrell goes back to the couch and sits down / applause
(from Schmidt's interview )
"I communicate better through music and song than I do with words," to paraphrase from the interview.

With his connection to purple and that fact he had quite a lot of genius mojo going on, it hardly surprises me to find him wearing a winged Mercury helmet, flashing the famous Worrell grin. 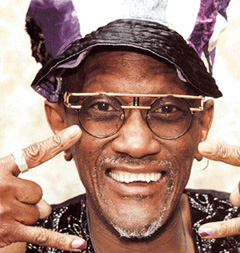 photo credit unknown
Don't know if it was somehow due to this archetypal connection we shared with purple, but he always seemed interested in my extracurricular activities and did what he could to support them.  For instance, there was a day of press interviews while Material was touring Japan.  Bernie asked me to sit with him.  The journalists would start to ask the same predictable questions, whereupon he would say something like, "What I'm really excited about and want to talk about today is my friend Oz's art gallery."  A big chunk of the Bernie Worrell interview would then be about the gallery."  He could care less about self-promotion.  They sent me the magazines when the articles were published.  They were in Japanese, obviously, so I couldn't tell how they segued from Mr. Worrell's music career to his friend's art gallery in Brooklyn.

In the early days of working with Bernie at Platinum Island and Greenpoint I frequently experimented with placing art images around the studio and control room.  At some point I acquired a shoebox full of Alien All-Stars bardo trading cards.  These were laminated, baseball-card sized abstract drawings of aliens by E. J. Gold.  I gave a dozen or so of these to Bernie and later, from a photo, saw that he had placed these around his Hammond B3 at a gig in similar fashion that I did at the mixing desk.

By bardo trading cards, it indicates that the images had one intention of subtly familiarizing the viewer to the intensity consciousness faces after the body and brain permanently die.  In other words, the space Bernie might hang out in right now according to several ancient traditions ranging from Tibet to Egypt to Peru.  Who fucking knows, really?  The point is that Bernie took to this material like a fish to water, not because he needed it - I suspect he was well-prepared for death long before I met him - but from some kind of resonance or recognition.  Out of any musician I've ever worked with, he seems the most equipped to deal with the high stresses and intensities of life without a body and brain.  Still, I do Clear Light bardo runs for him with the PP Orbs.  It's a video game-like environment on a platform hovering in a virtual sky.  Colors serve as important signifiers and mood changers in these orbs.  Got a sense of surprised recognition to observe that the platform that holds the whole thing up is purple.

Bernie seemed like he could cross over between the two worlds with ease.  He would draw out musical ideas, atmospheres, moods, textures, dialogue, etc. from some wholly Other place as easily as flipping a switch.  Though it couldn't be proven, in my opinion, he's the best example of how a life devoted to music and its mastery can alchemize a powerful spiritual being, a force of nature.

It felt like he might have taken me over to the other side one night in Europe, or perhaps we visited it together? Late at night, after eating, after a gig, a group of us walking to the hotel.  Bernie tells me I can go to the studio to meet Keith Richards when he's recording with him in the near future in NY ( I never made it.)  Somehow, we start talking about UFOs and possible Intelligence from Outer Space, that kind of thing.  I start to tell him something along those lines when I get this realization that he already knows what I'm talking about, I say something like that to him adding: "because you are a Space Brother!"  He just flashes the famous Worrell grin and we both laugh.

Bill Laswell wrote this for him (ingenio ingenium in): 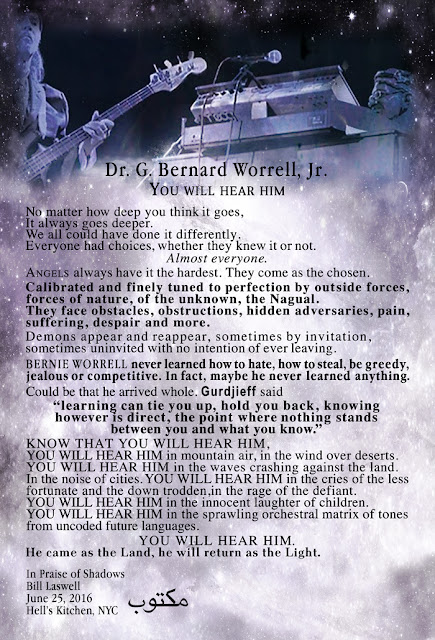