Speaking very generally, Magick can get classified into two branches:

1. Thaumaturgy, which has to do with changing the environment in some way, ie creating favorable weather for the crops, casting spells to influence things, cursing people who upset you, etc.

I would have to say that some measure of this kind of magick I've seen attempted has been by amateur dabblers thoroughly caught up in superstition and fantasy. Most of these types lack any real magical juice. I do acknowledge and have met rare individuals who can actually use Thaumaturgy in a responsible and non-ego gratifying way. Even so, it seems usually used quite sparingly.

2. Theurgic, that type of Magick concerned with expanding consciousness; invoking and contacting "god-forms" to open up circuits of gnostic reception; the Knowledge and Conversation of the Holy Guardian Angel, which, in one sense, basically means finding out what in the hell you're here to do (True Will) and doing it., etc.

Theurgic Magick has significantly greater likelihood of providing the benefit of Bardo Training than thaumaturgy.

To address a recent case brought to my attention: If someone imagines they are putting a curse on you, a couple of courses of action come to mind:

1. You can just ignore it. Nothing will happen, it's just fantasy and superstition on their part. They might have even dreamed up of engaging in some kind of war with you for some imaginary reason - most likely unknown to you, but probably having to do with an inadvertent slight of one kind or another.

2. You can somehow metaphorically, and compassionately, position a mirror in front of them in the hopes that they will get a glimpse of the pain that's causing such fantastic daydreams. Anyone who suggests permanently hurting someone because they expressed a view that offended them is obviously in a great deal of pain however deeply buried it may be. Robert Anton Wilson somewhere recommends Laura Huxley's book of basic magick exercises called "You Are Not the Target." The exercise that's also the title of the book further explores this.

Ironically, having a curse thrown in your direction, if one should be so lucky, can be great for Bardo Training:

A string of meditations called "type three" meditations are the performing meditations - in other words, how to do something you wish to do while conflicting realities and disorientating phenomena are running on.

The curser actually serves the cursee.


Hitchikers Guide to the Galaxy

Another qabalah encoded "book of the dead" type of literature is the science fiction comedy classic, The Hitchiker's Guide to the Galaxy by Douglas Adams. The main character, Arthur Dent gets off of Earth just before it gets destroyed to make way for a Hyperspatial Bypass Express. Dent, in his adventures post-Earth-mortem, travels through a series of bardo-like spaces and adventures learning as he goes. Very early on, after his first jump off of Earth, he is told by his extra-terrestrial guide, Ford Prefect, to always travel with a towel. Sound bardo advice on a few different levels. 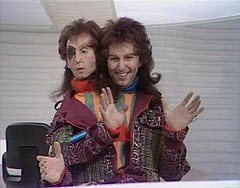 Zaphod Beeblebrox, President of the Universe

The Hitchiker's Guide books are good as are the radio recordings. I've always enjoyed the BBC television production of this story. The Hollywood film version changed a lot and dumbed it down into a science fiction soap opera, a predictably superficial melodrama. Not worth seeing, in my opinion.

Immediately after the conclusion of the series, at the very end of the last episode, a song is played over the end credits - not only is it incredibly uplifting but also a crystal clear communication of the Great Work. I won't say what the song is. I think the whole series must be seen for the full effect of the music.

Finnegans Wake counts as one of the greatest literary storehouses of qabalah enriched bardo data. It's admittedly a difficult read, at first, but like any other maze, gets easier after a while through practice. One trick to navigating the foreignness of all the coined words, phrases and mash-ups, is to sound out the words phonetically. You can let the sound be a guide, as it works like any other book of the dead. James Joyce wrote musically.

from p. 18. I will give some explanation:

(Stoop) if you are abcedminded, to this claybook, what curios
of signs (please stoop), in this allaphbed! Can you rede (since
We and Thou had it out already) its world? It is the same told
of all. Many. Miscegenations on miscegenations. Tieckle. They
lived und laughed ant loved end left. Forsin. Thy thingdome is
given to the Meades and Porsons. The meandertale, aloss and
again, of our old Heidenburgh in the days when Head-in-Clouds
walked the earth. In the ignorance that implies impression that
knits knowledge that finds the nameform that whets the wits that
convey contacts that sweeten sensation that drives desire that
adheres to attachment that dogs death that bitches birth that
entails the ensuance of existentiality.

My interpretation: On one level he's asking the reader if they can read his Qabalah- can you read it's world?

"abcedminded" - a pun referring both to awareness of letters and to "absent-minded," perhaps in the sense of quieting the thinking brain chatter, as a condition for reading "its world."

"Miscegenations on miscegenations" - miscegenation means interbreeding and could indicate the cross-pollination,indexing, and referencing of various religions, mythologies, systems of knowledge, etc that occurs in Qabalah.

"It is the same told of all" - finding the common core of truth in each system.

" ant loved" - animals, real and imaginary, and insects have qabalistic connotations. Ants aren't on the animal chart in 777, but they suggests an obvious image. Perhaps the actual versus potential capacity of what qabalah develops.

"in the days when Head-In-Clouds walked the earth." - recalls a comment I made toward the end of the Tales of the Tribe class responding to someone who suggested the aim of Qabalah was to get one's consciousness to Kether. I replied, that the aim, as far as I was concerned, was to bring the awareness of Kether into Malkuth ( the material world) .

The last sentence that starts, "In the ignorance..." could describe a qabalistic process of theurgic magick from inception to manifestation. It also references the death/rebirth archetype.
Posted by Oz Fritz at 1:15 PM