Qabalah can appear a very dense and complicated system but the good news is that we don't have to learn it all at once to make it functionally operative in our daily life. We can take it in piecemeal and build from there. All we need to start is a copy of 777 and Other Qabalistic Writings of Aleister Crowley the premier dictionary and reference guide to this science and art. Another basic tool for this start-up kit is a diagram of the Tree of Life which can be drawn, painted, or simply photo-copied from a book. A lot of information can come in just by contemplating this image. 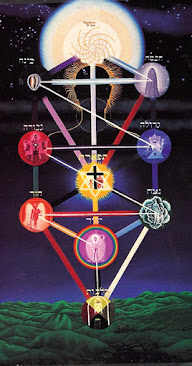 Observing the Tree of Life, we see that one sphere, or Sephira as they're known individually, has pathways connecting it to all the other Sephiroth except the lowest one. It's the Sephira right in the middle of the Tree called Tiphareth. The English word for it is Beauty and its key number is 6.
We can begin receiving qabalistic insight by learning and observing all the correspondances to Tiphareth. We do this by looking at the tables in 777 that start on page 2. The small column of numbers to the right of every table represents the key scale where you find the key numbers. So, for Tiphareth, we look at the row beside the number 6 on every table. The first English table tells us that this is the Sphere of Sol, the Sun. As we go through the tables, it's not surprising to see all the Sun Gods associated with Tiphareth: Ra, Apollo, Christ, Buddha, Krishna, etc.
We can see from the Tree of Life picture a few posts back, that the human body gets placed on the Tree such that the different Sephiroth correspond to different parts of the body. It should be obvious from the diagram which part of the body and which chakra corresponds to Tiphareth.
This is the method I used to initiate qabalah studies and it worked pretty good. I didn't memorize all the tables right away and then try to remember it all as has been suggested in certain quarters.
As mentioned earlier, Robert Anton Wilson said in a lecture I attended that the Illuminatus! Trilogy, which he co-wrote with Robert Shea, was meant to be a guide to Qabalah on one level. We see that the chapter titles are named in order of the different Sephiroth on the Tree from top to bottom. The story begins in New York's Central Park. Central Park obviously corresponds with the central Sephiroth, Tiphareth. Wilson and Shea also begin their qabalistic odyssey in Tiphareth.
If we look at the very last lines of the book from the final appendix they read:
The sun was bright, the air was clear, and it was Spring, which may explain why Hagbard began whistling as he walked with a brisk and determined pace toward the Senate Office Building. The tune was "My Heart's in the Highlands."
So we get keyed into Tiphareth at the very end of the book, as well. Perhaps their intention meant to create an isomorphism (comparable form) with the cyclic sentence that begins and ends James Joyce's Finnegans Wake? Bringing the perspective of JJ's phonetic, sound-based, dream language into the mix might shed light on the phrase Senate Office Building, and how the energies of Tiphareth can get alchemically absorbed and practically applied.
Apart from Crowley, Wilson, and James Joyce, another writer who employs qabalah to communicate a meta-language of imagery is E.J. Gold. A good example is both the play and the book Creation Story Verbatim. The play serves up a divine comedy featuring the Archangel Gabriel and the Lord God Herself. This quote gives away its qabalistic inclination:
"You have to see the numbers, Gabriel. You can't win if you can't see the numbers."
There also exists a recording of a rare talk where Gold goes into some of the qabalah from an early version of Creation Story Verbatim known then as Nimbus. David Bowie is one lyricist I know who has explicitly utilized Qabalah:
I'm closer to the Golden Dawn Immersed in Crowley's uniform of imagery on his Hunky Dory album.
Another album, Station to Station, has: Here are we One magical movement From Kether to Malkuth
Kether being the top most Sephiroth while Malkuth is at the bottom signifying the material world. The album title Station to Station indicates the different Sephiroth.
Apart from starting out by connecting with Tiphareth, it's not a bad idea to learn the basic correspondances and structure of the Tree of Life in a general way.
Two books I highly recommend in this regard:
1. The Mystical Qabalah by Dion Fortune
2. The Chicken Qabalah of Rabbi Lamed Ben Clifford: Dilletantte's Guide to What You Do and Do Not Need to Know to Become a Qabalist by Lon Milo Duquette.
Posted by Oz Fritz at 4:26 PM