A Problem of Language

I've been asked to elaborate on Qabalah and the Qabalisitic lexicon which I mentioned recently in the post about Iggy Pop's poetry:

Looking at these lyrics years later, they ring more profound than ever for me. Viewing them through the occult language known as Qabalah, as developed by Aleister Crowley and others, one can clearly tap into a different kind of information useful for personal transformation and evolution.

One of the linguistic techniques Aleister Crowley applied in his Qabalistic lexicon was to associate very simple everyday words with particular magical formulas, that is, specific techniques for transformation. Words such as OUT, PLACE, THAT, and IT were given specific metaphysical meanings in Crowley's Book of Lies. For instance the word IT corresponds with Absolute Reality.

To address this, I'm going to post an unfinshed essay I started to write a few years back, and go from there.

A Problem of Language

The problem of accurately communicating higher states of consciousness, how to reach them, what to expect, and what to do there has confronted many researchers in the field. Words prove inadequate to fully represent states and spaces beyond intellectual concepts. G.I. Gurdjieff, in one of the lectures included in “Views from the Real World” expressed the need for a new language to communicate the ideas he was presenting. William S. Burroughs spent considerable time and effort studying Egyptian hieroglyphics with the hope of communicating through images rather than words. Ezra Pound investigated Chinese ideograms for the same purpose. Timothy Leary worked at formulating a symbolic language in order to communicate the richness of experience to be found in alternate reality spaces.

One person who put considerable effort toward solving this problem of communication was Aleister Crowley. Crowley, compiled the definitive dictionary of a comprehensive symbolic language called Qabalah (traditionally spelled Kabbalah). It is this unorthodox, pantheistic, multi-level use of Qabalah, which we shall be examining in this essay with the aim of showing how to practically apply it.

General Semantics theory maintains that the language constructs we use and think in tremendously influences how we perceive reality. Therefore, if we wish to expand our reality we can broaden the language we use. An open-ended higher-order language can open the door to the alternate states of consciousness it seeks to classify and map.

The word Qabablah means, “to receive”. Qabalah is received through a language of imagery based on number. The alphabet of this language maps itself by a model called “The Tree of Life.” The Tree of Life comprises 10 spheres or “sephiroth” and 22 paths that connect them. These make up the 32 key numbers, the 32 filing cabinets, that make up the basic building blocks of this magical language.

The stylized Tree of Life illustration below comes from Dion Fortune's The Mystical Qabalah, a highly recommended beginning textbook on the subject. 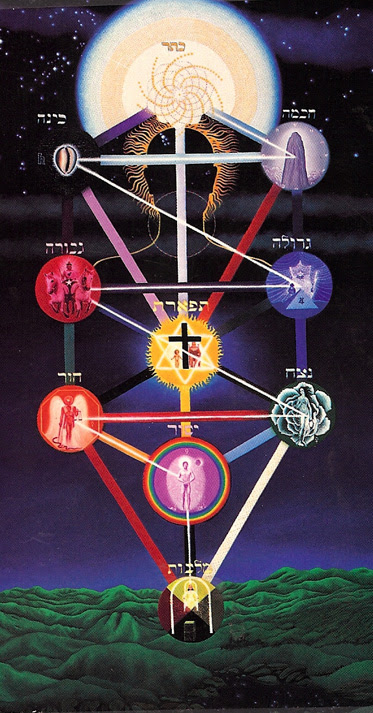 We call this a magical language. Magick is the Science and Art of causing change to occur in accordance with Will as defined by Crowley. The language of Qabalah can communicate instructions for transformation. That’s what we mean when we call it a magical language.

Each of the 22 paths corresponds to a letter of the Hebrew alphabet and to a Tarot trump card. The science of Qabalah was originally formulated to decode, penetrate and understand the inner meaning of biblical scripture and thus was focused on the study of esoteric Judaism. The modern, unorthodox brand of Qabalah encompasses nearly all world religions and mythologies. The 32 keys have correspondences with colors, zodiac signs, animals, Gods and Goddesses, precious stones, fragrances, plants, trees and other associations

Qabalah is a system of classifying ideas, archetypes, experiences and phenomena. It has been likened to a filing cabinet. One aim is to become aware of the common underlying thread of unity found among a wide variety of cultural milieus and belief systems. In other words, to discover the inner truth that permeates different systems of spiritual endeavor..

Qabalah, like any language, is a tool for communication. Some experienced labyrinth voyagers, otherwise known as mystics,shaman, and musicians, use it to communicate the art of their work. This work is in higher dimensions. What is needed is a multi-level language with the capability of communicating far more than words could ever hope to. A language that can communicate mood to the thinking, feeling and moving centers in a balanced way. A language that serves to impart navigational clues, course correction guidelines and basic voyaging instructions. Qabalah does this in a far more immediate and holistic fashion than conventional language.