The Four Elements - visualizations from Initiation into Hermetics by Franz Bardon

Fire: Imagine yourself to be to be in the center of the Fire element, which in the shape of a sphere, encompasses the whole universe.  Imagine that everything around you is fiery.  Now begin to inhale the fire element through your nose and also simultaneously inhale through your whole body.  Inhale deeply with regularity, without compressing the air or straining the lungs.
The physical and astral bodies must be like empty containers into which the element is inhaled or drawn in with every breath.  The heat of the element must be increased with every breath.  The heat and also the expansive force must continue to increase as must the fiery pressure until you feel fiery-hot.
Start with seven inhalations of the Fire element, and with every successive exercise increase it by one inhalation.  As a rule, 20 - 30 inhalations should suffice.  Only those students who are physically strong and who possess a great deal of will-power should exceed that number of inhalations in accordance with their ability.  A string of beads can be used if counting interferes.
The next step is the elimination of the Fire element.  Inhale normally through the mouth, and exhale the Fiery element into the whole universe through the mouth and the entire body. The exhalation of the element has to occur as many times as the inhalation.  This is very important because after this exercise has been completed the student must have the feeling that not even the minutest particle of the element has remained within her.  Also, the feeling of heat that was produced must dissipate completely.  Eyes may be open or closed when doing this whole practice.
Air: Same as Fire only we have to imagine a different feeling. Imagine that you are in the center of an air space, one which occupies the entire universe; nothing exists for you other than that the space encompassing the whole universe is filled with air.  Inhale as before.  Every breath adds to the amount of air and with more air you fill the whole body. to such a degree that it resembles an air balloon.  At the same time you must imagine that your body is getting lighter, as light as the air itself.  The feeling of lightness must be so intense that eventually, because of its lightness, you no longer feel your body.  When finished, exhale all the Air element same as you did with Fire.
Water: Imagine that the whole universe is an infinite ocean and you are positioned exactly in the center.  With each total body breath, your body is filled with this element.  You must feel the coldness of the water in your whole body.  The more often you practice this exercise, the more distinctly you will sense the Water element. with its coldness attributes.  You must virtually feel like a lump pf ice.  Each exercise should not exceed 20 minutes.  In time you should be able to cause your body to become ice-cold even on the hottest summer day.  Exhale and banish the element as before.
Earth: Imagine that the entire universe consists only of earth and you are sitting in its center.  Do not imagine the earth to be a lump of clay but instead imagine it to be a dense earthy substance.  The specific attribute of the earth substance is density and gravity (heaviness).  As before, inhale this element.  You must be able, through concentration, to accumulate so much of this earth substance within your body that it feels as heavy as lead and, because of this heaviness, you feel almost paralyzed.  As always, exhale and banish this element when finished.  As with the others, the duration shouldn't exceed 20 minutes.
You can make use of colors to assist the visualization:
Fire = red
Air = yellow
Water = blue, greenish blue or turquoise
Earth = green

All essays by Aleister Crowley unless otherwise noted. 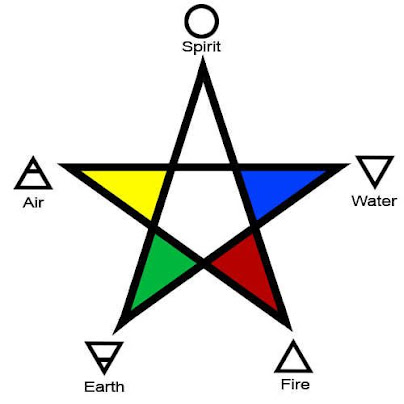