Servants of the Star & Snake

I've held a deep fascination for Kenneth Grant since first hearing about him in Robert Anton Wilson's Cosmic Trigger, The Final Secret of the Illuminatti.  Wilson invoked Grant's researches into his story to support the hypothesis that Beings from Sirius were transmitting preternatural Intelligence to certain individuals on Earth.  Wilson, appropriately enough, cites Grant 11 times in Cosmic Trigger, the first one being a quote from The Magical Revival stating that Crowley identified the heart of his magical current with Sirius.  As well as being adepts at Qabalah, Grant and Wilson also shared an appreciation and a practical use for the works of H.P. Lovecraft.  They both experimented extensively with theurgic magick.

I have strong affinities with many of the subjects and disciplines found in Cosmic Trigger particularly Sirius, Magick, Qabalah, Lovecraft and synchronicities.  If Wilson acts as a spiritual progenitor of sorts for me, then Kenneth Grant seems like an Uncle from the same lineage.

Servants of the Star and Snake published this year by Starfire and edited by Henrik Bogdan beautifully illuminates the salient points in the legacy of Kenneth Grant's often controversial and iconoclastic career.  The chief influence on his path was undoubtedly his wife, Steffi as evident by the subtitle: essays in honour of Kenneth and Steffi Grant; the cover photo is of a painting of the couple by Osman Spare and across from the title page is a photo of them on their wedding day, February 14, 1946.  One of Grant's great acts of service was helping Austin Osman Spare continue researching and publishing his magical system and art.  Grant is responsible for bringing a great deal of recognition to Spare's work.  Without him, most of us would never have heard of Austin Osman Spare.  It was Steffi Grant who first brought Spare to Kenneth's attention.  I don't know who turned him on to Lovecraft. 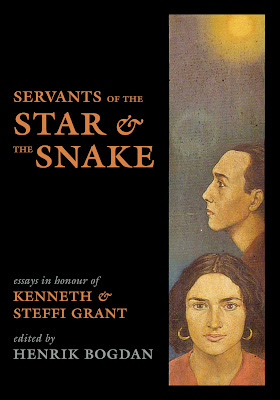 Many of the essays appear to have been written by people who had a close relationship with the Grants.  The love and respect they have for his work comes through quite clearly in the writing.  All of the main bases in Grant's legacy seem covered: the fruitful relationship with Spare, Advaita Vedanta, Gerald Massey, Lam, Sexual Magick and Tantra, etc.  There is the excellent essay, Foundations of the Typhonian Trilogies that provides valuable background on how Kenneth Grant's unique expression and continuance of the magical tradition came into existence.  It was the first two volumes of the Typhonian Trilogies that Robert Anton Wilson cited from in Cosmic Trigger.

Some of the controversies Grant was severely criticized for get addressed in this compendium.  His creative incorporation and use of fiction by H.P. Lovecraft, Sax Rohmer and others receives some exegesis and clarity here.  His view, following the lead of Frater Achad, that the aeon of Maat had shown up early to supersede the aeon of Horus receives an inside perspective in the essay by Nema, Kenneth Grant and Maat.  Nema had visions of her own in that regard and relates an interesting synchronicity when she sent a record of them to Grant.

Two interesting points made in her vision: the presiding deity of the aeon appears a matter of human perspective and that aeons are eternal.  To me, the boundaries between aeons become fuzzy - elements of the aeon of Isis and Osiris as well as Maat appear in the current aeon of Horus.  How they can exist eternally gets explained by Deleuze with his paradox of pure becoming in The Logic of Sense.   Whenever an event occurs, and this applies also to macro-events such as the advent of aeons, we can distinguish two dimensions of time.  He called the ordinary sequential flow of time which is limited and measured, Chronos.  The second dimension of time he called Aion.   Viewed in the time frame of the Aion, when an event occurs it splits off simultaneously into the infinite past and the infinite future.  This indicates the flow of pure becoming.  The causes and origins of the Maat event go infinitely into the past of its occurrence, therefore can get tuned into now.   I hold the opinion that Horus best describes this aeon in the Chronos time reference.  The becoming of the aeon Horus = the aeon of Maat.  The DNA of the Maat aeon seems encoded in the one of Horus.  Tapping into it may explain why some occultists feel it  has arrived.  I don't see a sharp dividing line between the two, but suspect that we still have a ways to go.  The current president of the United States seems a strong throwback to the male dominated Age of Osiris.

One of my favorite lines in the book is a quote from a letter Grant wrote to Nema: "You do not appear to be able to let go of the idea that the 'self' is some kind of entity ..." She selects a few additional excellent exchanges in their letters then states the hope that this correspondence appear in print.  We second that motion.

Servants of the Star &Snake.  I no longer consider the Star to exclusively represent Sirius.  I see it in its sense as described in the previous episode of this blog flow, Beethoven and Simrit, itself based on the description of the Star card in Crowley's The Book of Thoth.  Or as Liber Al 2:62 gives it: "I am uplifted in thine heart; the kisses of the stars rain hard upon thy body." The Snake gets a shout out in Liber Al 1:61 toward the end: "Put on the wings and arouse the coiled splendour within you: come unto me!" Hindus and yogis call it kundalini, sexual energy which = spiritual energy.  Seen with this perspective, the title Servants of the Star & Snake becomes synonymous in one sense with the service of love under will.

The valuable contributions, connections, and expansions Kenneth Grant brought to Thelemic sex magick are clearly expressed more than once in the book.  Dialectically contrasting his work in sex magick with Crowley's seems shortsighted.  I would avoid conflating Crowley's experiments in that area with the extensive practical information found in Liber Al, The Book of Lies, The Book of Wisdom and Folly to name just a few sources in Crowley's oeuvre.  To focus on his possible experimental mistakes or wrong approaches against what Grant got right occludes a great deal of useful data on the subject found elsewhere in Crowley's writings, data potentially supplemented quite well with Grant's modifications.

My favorite essay is Shakti in Chinatown by Michael Bertiaux.  The literary, "fictional,"  (I would call it magick realism) nature of it seems well-suited for getting to the heart of the Grants' legacy. It is the only chapter, in my recollection, that directly exposes the theurgic character of their work.

In another excellent essay on Babalon in the Typhonian tradition, Manon Hedenborg-White states that Grant has a propensity "to play with and destabilize meaning," (p. 137) when he or she writes of the controversial claim Grant makes by identifying Babalon with Choronozon (Chaos).  This further aligns Grant with Robert Anton Wilson and other writers (including Crowley) who employ what Wilson called guerilla ontology - making provocative statements that might not literally be true, but that serve to help dissolve the readers preconceived views.  Hedonborg-White goes on to articulate Grant's use of this technique.  Christopher Hyatt refers to it as "breaking set" in the Preface to the Eye in the Triangle.  Another example of Grant's literary tricksterness is the title Against the Light.  Subtitled, A Nightside Narrative the undiscerning reader might conclude this is about dark things fighting the light and never crack open he cover.  If they do make it to the Contents page, they'll discover opposite it a quote from Finnegans Wake by James Joyce about holding up a verse against the light to read it better.  In other words, the assumed meaning of the title gets reversed.

Like the writings of Crowley, Wilson and others in this lineage, learning to understand, use, and flow with reversals of sense and paradox appears key to deeply penetrating into the alchemical/transformational percepts and affects found in the Typhonian Triliogies and Kenneth Grant's writings in general.  It goes without saying that any understanding of Qabalah aids the endeavor logarithmically.  "Paradox is initially that which destroys good sense as the only direction, but it is also that which destroys common sense as the assignation of fixed identities." (Deleuze, Logic of Sense p. 3)  I elaborate on the esoteric use of paradox here.

In her essay, Nema quotes from Outside The Circles of Time another common theme:

It is not my purpose to try to prove anything; my aim is to construct a magical mirror capable of reflecting some of the less elusive images seen as shadows of a future aeon.  This I do by means of suggestion, evocation, and by those oblique and 'in-betweeness' concepts that Austin Spare defined as 'Neither-Neither' ..." (p.180)

The quote goes on to explain the benefits of such a practice.  The state of 'in-betweeness' is what Tibetan Buddhists know as the Bardo.  'Neither-Neither' also describes the Bardo.  The term comes from the Tibetan Book of the Dead.  Kenneth Grant appeared a very intrepid and experienced bardo explorer.  The term 'magical mirror' also becomes a clue for the realm or area of exploration we're talking about.  The bardo sometimes gets considered an unravelling of consciousness.  Chapel Perilous seems an extreme sector of the bardo that can seep into and disrupt normal social stability.  Knowing that Grant practices bardo exploration may make it easier, or you braver, to navigate the stranger areas of his writings and benefit from them.  By reading his writings, you will explore the bardo, it comes through in his books.

This may (or may not) explain why Bertiaux put Shakti in Chinatown.  Chinatown is a favorite of Robert Anton Wilson. Chinatown in that film gets portrayed as a bardo-like area of mystery and unpredictable danger; dark and scary.  Bardo exploration has also been referred to as Darkside Dreamwalking, another appropriate description for some of Kenneth Grant's adventures.

Servants of the Star and Snake is a beautifully conceived and executed book with a high aesthetic on par with it's content and subject matter.  Praise Thoth!  Every article is worth the price of admission though the entrance may not be for everyone.
Posted by Oz Fritz at 5:18 PM