By the Book: Folklore by Jack and the Bear

Pulling inspiration for sound from a lucid nightmare also proved to be one of the biggest contributors to the aesthetic of this record. I realize I will always hear the songs a little differently in the sense that I am revisiting once subconscious thought now translated through sound.
- Adam Schreiber

By the Book: Folklore by Jack and the Bear revives the fine art of musical theater to great dramatic effect. - as great and as effective as an ancient Greek tragedy or a David Lynch film.  A vision presented of a dark dystopia in a not so distant industrial future.  The story is set in 2076 with the events leading up to it appearing eerily prescient to one potential future in our (so-called) real world considering that President Trump quite possibly looms on the horizon. (Just today I spoke to an intelligent educated older California lady trumpeting Trump - scary!!) This is a concept album, a concept that directly confronts the ills of Corporate State sanctioned modern civilization, brainwashing and Control; programming the robots. The whole story behind the album is told in great detail here where you can also stream the album.

This excerpt from the Prologue rings a little to close to home for my comfort, but perhaps that's the point of this darkly evocative Music Theater - to serve as an Early Warning System: Humans of Planet Earth get Your Shit Together And Start Treating Each Other Right.  Systems of Industrial Control proceed to a Dead End.  The dangers of complacently clinging to outdated tradition out of fear for change. I know it sounds an awful lot like the Republican Party yet the message seems to go far beyond a strictly political interpretation.  The horror of the situation can be felt in the music.

Not long after the turn of the millennium, a self-inflicted apocalypse of sorts takes place due to human activity, tradition and corporate gluttony. Corrupted political rule led to World War III; nukes were launched, governments were demolished, traditional (by the book) economics were failing more than ever before, but that didn't stop people from practicing tradition, after all, it's what they were taught.
After roughly twenty years of warfare, a select group of "self-elected, self-praising, privileged business enthusiasts took it upon themselves to plot and start a new civilization. 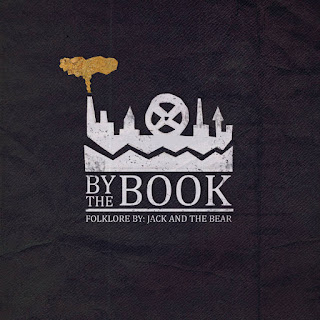 Jack and the Bear describe this music as Industrial Folk with a "Dark Disney" vibe to it.  They say it's inspired by Grimm's Fairy Tales, Aesop's Fables, musical theater, and the industrial landscape they found in their immediate environment.  I would describe it as resonant with a particular style of Music Theater - Bertolt Brecht as filtered through the sonic and storytelling sensibilities of Tom Waits ... and then some.  The visual imagery is so strong that I pick-up more cinema references than I do musical ones.  The music is like a really, really good film soundtrack.  Not only should this receive a fully staged theatrical production, preferably before the next election (in my dreams), but someone could quite easily make a provocative and compelling film based on this dramatic music.  The opening song, Greed's Theme Part 1, makes me think of the 99% vs 1% sloganeering of Bernie Saunders and the Occupy Movement.  The music has the atmosphere of an ominous Orwellian march of workers bound to industrial slavery as shown in the 1984 commercial that introduced the Apple Macintosh computer.  Other films that come to mind include Fritz Lang's Metropolis, Terry Gilliam's Brazil and the film version of Pink Floyd's The Wall.

Here's one video interpretation, a tragic love song called Smokestacks that might be a play on words as Smoke is also the name of a female character in this saga:

This sound of this production is spacious with vast rooms of depth to get immersed into.  It makes for easy induction into their self-described lucid nightmare.  Maybe they should call upon Tim Burton to direct the By the Book film? The sonic environment is always interesting especially with the connecting link of industrial machinery stomping, clanking, and letting off sharp whistling blasts of steam in the background. 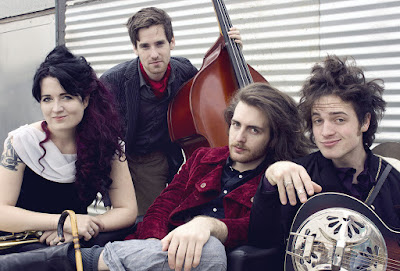 The process of how this Art came into existence is fascinating.  I asked one of the writers in Jack, Brandon James, about this:

We began writing the first few songs in North Carolina (while visiting family), and ended up with about 10 - 15 brand new song ideas within about a week (this is unusual for me, as I normally take about a month per song idea before I find any desire of possible revealing it to the world.) After returning home, I found myself in the best writing state I've ever experienced. To make a long story short, I wrote close to fifty songs within the span of a month and a half. Adam and I whittled it down to the best twenty tracks, as we began to brainstorm a story. How it became a futuristic warning on industrial greed, I'm not really sure how to explain in a concise manner. But I will say Adam and I became very aware of our industrial surroundings, living south of downriver, across from a looming pair of smokestacks kind of shaped my mind to create the futuristic industrial folklore story we ended up with. Having our recording setup right next I-75, what would usually be a nuisance, ended up really working to our advantage, because if any industrial sounding noise found its way into our recordings, we found it only assisted with bringing our story to life more and more

As complex as the album’s sound turned out to be, I felt more at ease, or rather a more “natural” experience while writing the story/lyrics. Dealing with many different forms of corruption, each song deals with its own corporate woe - “Don’t Look Down” for example deals with the disenchanting world of factory farming. Being “quiet” vegetarians for a little of a year now, I based the lyrics off a dream of Adam’s that was so vivid, it actually turned him away from eating meat in the first place. The song really came together with the company of Chloe Feoranzo (mostly noted for her work with Pokey Lafarge) – I remember sending her “All the World is Green” by Tom Waits as a reference.

I asked producer/engineer Adam Schreiber if their environment played any part in the sound:

Yes, I would say the house where the rehearsals, tracking, mixing and mastering took place had a very large influence on the sound of the record. We couldn’t seem to do a take in this house without getting some type of industrial ambiance bleed over or wind or crows in the microphones. We ended up making our own factory inspired sounds to help emphasize and embrace our surroundings. For example, I ended up flipping over a 1920’s Leedy bass drum on its side and patched it to an LA-610 to a Pro Co Rat pedal to a short verb chamber to a UAD Rev A 1176 fixed at a high ratio to achieve the pulsing “Machine” sounds.

I asked Adam about his vocal processing. The narrator goes through a variety of characters and situations each with a distinctive sound. He was quite candid:

It was a lot of subtle gain staging of harmonic distortion from multiple units that all added up to create the final sound. Most of the more unconventional vocal sounds were achieved with a 3 microphone set up, a stereo room pair of 1970’s SM81’s running through the UAD Neve 1073 modules just on the verge of break up placed in a hallway plus either an Sm7b or Neumann TLM-49 as the primary vocal mic running through a 610 pre in a high gain stage, all lightly hitting the UAD ATR-102. For any further exaggeration, I would re-amp the vocals through a toilet bowl “Reflection chamber” with a pa speaker and a vintage EV RE16 patched into Sansamp and parallel processed the signals to taste. There were also a few instances where I re-amped or even doubled the vocal outside, recording the signal with my Zoom h6 to capture from different perspectives at multiple locations. For Example, the intro of “From Below” was recorded at a bird sanctuary in Danville, KY and “A Man Lost” bridge double was recorded at a very reflective swamp in Awendaw, SC with a Mid-Side binaural capsule.

Brandon told me what they learned making this album:

I think as a band, we finally learned the proper way to make an album (as far as doing everything ourselves) – As a writer, I found my niche with basing everything off a strong concept I feel connected with. Aside from writing, I also experimented with playing a lot of instruments outside of my comfort zone such as accordion, melodica, tenor saxophone and upright bass as well as arranging choir parts.

The other musicians in Jack and the Bear, Christina Nielsen and Evan Close contributed their own parts. The guest musicians in what came to be known as the Industrial Ensemble were also encouraged to improvise their parts. They get credited on Jack's bandcamp page linked to above.

I recorded their first album and wrote about it here.