This looks to be another one of those incredible artistic events that I've been waiting all my life to do.  I highly recommend anyone in the New York area interested in plunging in to an immersive artistic experience to attend.   It's a multi-media performance where every element - the music, the visual and the dance will be of peak artistic expression.  In other words, all participants are extremely talented at what they do and this is a highly interesting, unique combination; a group synergy producing a harmonic order/chaos of light, sound and motion.  Art as negentropy.

Exploring the Hidden Music is the vision of Christopher Janney, an architect of sound, space and light ranging from airport installations to private homes, realized in collaboration with Bill Laswell, an architect/constructor of musical voyages and dimensions of equal depth. Choreography is by Sara Rudner of the Twyla Tharp lineage.  I know a little of Twyla Tharp's work from The Catherine Wheel soundtrack she comissioned  the Talking Heads to do for her.

Heartbeat, one of the central pieces of the show, is the one I'm most looking forward to seeing at the moment.  In it, a dancer, Sunny Hitt in this performance, is wired with wireless contact mics that pick up and transduce the sound of her heartbeat into an electrical signal that's then amplified and fed into the Front of House Soundcraft mixer for broadcast throughout the theater.  Live musicians start to play with her but no one plays on the beat of her heart, the driving force.

I'm not making any of this up, by the way, this will actually happen in a few days at 8pm November 25th at The Gramercy Theater, 127 E 23rd St, New York, New York 10010.
Tickets available HERE. The link takes you to the janneysound website which has much more biographical info on Janney.

Heartbeat as appears one of those serendipitous timing things for me as it perfectly matches the tenor of my recent blog series, To Exercise Will which has Sufi heart opening practices as a main theme.  Christopher Janney's name appears as sheer coincidence.  As I'm writing this I get a vector diagram of the Heartbeat segment from Janney.  He has the most detailed stage plots I've ever seen, works of art in themselves reminding me of blueprints for a battleship or spaceship.

I've been interested in architecture and music for a long time, since reading Robert Fripp's groundbreaking article on the subject in Musician magazine back in the early 80s.  In it he talked about the dimensionality of the sound field: height = frequency response, width = panoramic potentiometer  (ie the pan pot on a mixer) and depth = the dynamic range.  Plotting sound through this dimensional grid reveals that music has geometry.  Not long after, I became very interested in Buckminster Fullers energetic geometry called Synergetics that went beyond Euclidean geometry so I started to apply Fuller's approach to mixing music. I also included a fourth dimension, time = rhythm.

Another nail in the cross between music and architecture was driven in when reading Gurdjieff describe how architecture alters consciousness in Beelzebub's Tales to His Grandson.  He said that whenever you go into a building your consciousness will change to some degree due to the architecture of the space just entered.  This in part explains what they went for with the great Cathedrals of Chartres and Notre Dame.  To create a divine, heavenly, enlightened state of being just by walking through the door.  If music has geometry and architecture it can induce similar exalted moods just by listening, walking through that door into the sound describing and defining the space.

I remember once as a studio assistant labelling an SSL mix with the tag "sonic architecture" and seeing Bill take notice of it.  It was then that I thought I might have a future doing interesting things in this business.  Now, here we are.

When walking into the Gramercy Theater next Tuesday night you will immediately begin exploring the hidden music either consciously or subconsciously as pentatonic music will be playing out of the PA speakers and two additional speaker stacks provided by Bose in the back of the theater to create a surround sound experience.

Architect/composer Christopher Janney and legendary producer/musician Bill Laswell join as they "explore the hidden music" - found in spaces, the human body and in the meeting of artistic minds.

This performance includes a new version of Janney’s “HeartBeat” with percussion, electronics and voice accompaniment. "Heartbeat" is a dance/music/cardiology mash-up and was made world-famous when toured internationally by M. Baryshnikov in the 1990's.

All this together with one of Janney’s interactive sound/light installations at the door and a new interactive light work “Touch my Light” over DJ Adam Gibbons (Uhuru Afrika) set with live drumming, the result should be a wild ride where, as Bill is known to quote Burroughs, “Nothing is true, everything is permitted.” 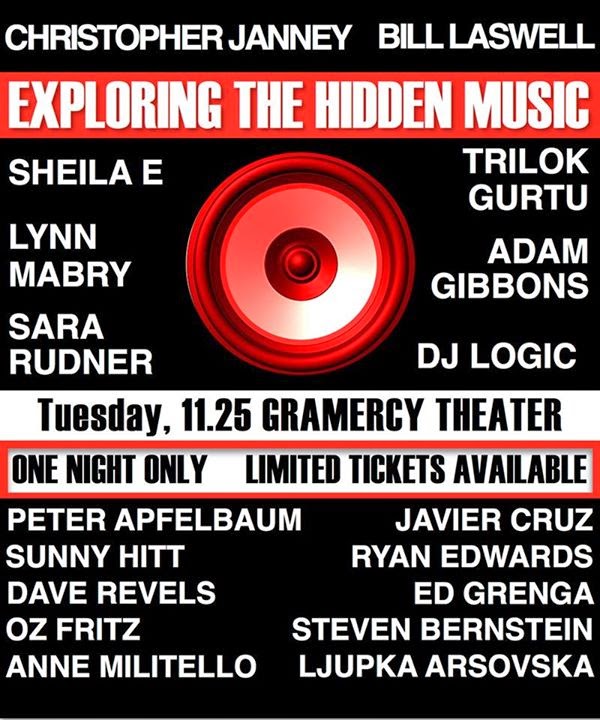