The big excitement at Kanaga System Krush World Headquarters is the first officially released cut of Music in Mali: Life is Hard, Music is Good has been completed and submitted to the Sundance Film Festival.  Congratulations to Aja Salvatore, David Nicholson, Rafael Tudesco, and crew who put in marathon hours the past couple of months to make it happen.  The audio hasn't been fully mixed yet, but rough mixes are acceptable for submission.  We won't find out the confirmation that it's been accepted until December which gives us time to mix the sound.

Driving up to the aforementioned World Headquarters today I was met with the sounds of tribal drumming - Aja, Seydo, and Rafael, each playing a large dun dun ( African bass drum) with Aja and Seydo also playing cowbells for the top end.  Sounds, and a rhythm you would expect to hear from deep in the heart of West Africa bounced off the stone walls and tiled floor of the patio they were praying and playing on out into the world at large tickling the soul of Jah.  Muslim countries have  yearning  prayer calls 5 times a day sounding out on the audio landscape.  Rural America, probably rural most places, have roosters crowing at the break of day - and many other times day and night - in their audio landscapes.  Crowing in medieval times was considered inarticulate cries for God.  Africans like to drum.  Much more articulate, far less organizedly religious, the drumming has a power that shakes the earth when you're close to it. 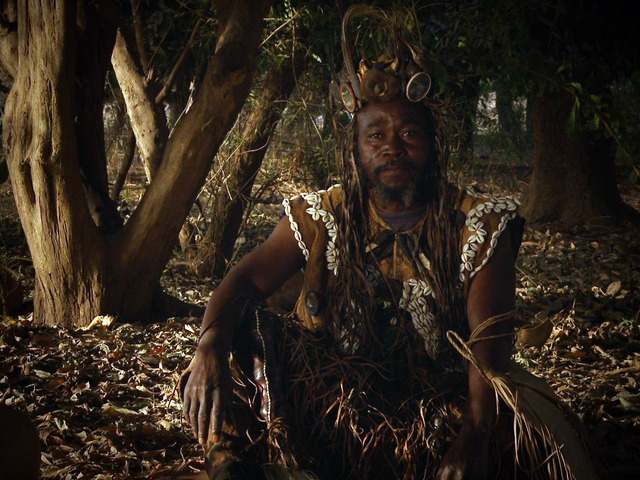 Life is Hard, Music is Good goes in depth into this kind of music, music intended to function as a vital transformative,healing and guiding force.  Music that feeds the heart and the soul.  Music that makes you want to dance exuberantly for the joy and beauty of life in spite of all difficulties.  Poverty, war, choking pollution, these are familiar human realities of everyday life where this music comes from.  The music keeps their spirit alive.  Indeed, one often encounters great wealth of spirit in Africans, palpably sensible, moreso than in more affluent Western countries.

I poked my head into the editing suite area, it looked surprisingly vacant and calm.  In some sense it felt like the dust was still settling.  The jubilant buzz of accomplishing a long term difficult goal continued to resonate in the space.  This story of Mali and it's rich heritage of music was going out to the world.  A beacon of African sound and vision magick to brighten these darker days.

Though the world premeire of Life is Hard, Music is Good will likely be at the next Sundance Film Festival in Utah, there will be a private screening sometime next week at Nevada City's Magic Theater.  This is good, I haven't seen the full cut, and it'll be nice to see it on a theater screen.