If dogs run free, then why not we
Across the swooping plain?
My ears hear a symphony
Of two mules, trains and rain

The best is always yet to come
That's what they explain to me
Just do your thing, you'll be king
If dogs run free

If dogs run free, why not me
Across the swamp of time?
My mind weaves a symphony
And tapestry of rhyme

Oh, winds which rush my tale to thee
So it may flow and be
To each his own, it's all unknown
If dogs run free

If dogs run free, then what must be
Must be and that is all
True love can make a blade of grass
Stand up straight and tall

In harmony with the cosmic sea
True love needs no company
It can cure the soul, it can make it whole
If dogs run free

Do what thou wilt shall be the whole of the Law.
Love is the Law, love under will Bob Dylan style.
The lyrics above come from his album New Morning.

Two landmark points occur for the student going through Crowley's course.  This first is known as the Knowledge and Conversation of the Holy Guardian Angel.  The second is the Crossing of the Abyss.

Crowley said he decided on the term "Knowledge and Conversation of the Holy Guardian Angel because it seemed so absurd as to discourage metaphysical speculation or debate about what it actually "is", what its properties "are" etc.  He also said that all beginning magick practice should get directed toward realizing this knowledge and conversation, that any other magick would be considered black.

Everyone's relationship with their HGA manifests differently as you might expect in a relativistic Universe where every Star has a unique orbit.  Every explanation I've read or heard about the HGA varies slightly though they share common features.  Crowley gave seemingly contradictory accounts at different points in his life.  He told his student Frank Bennett that the HGA was the subconscious mind made conscious which suggests it as a more evolved part of our own brain.  At other times, Crowley acted as if the HGA manifested as a discrete conscious entity.

Some occultists describe the Knowledge and Conversation of the HGA as the union of the microcosm of the individual with the macrocosm of Universe. That seems a big clue.

The HGA ritual originates in a medieval text called The Sacred Magick of Abra-Melin the Mage that had recently (to Crowley's time) been translated into English by Crowley's teacher MacGregor Mathers.  As presented in Abra-Melin, this consists of a six month course of rituals and practices in hermitage from society.  Crowley bought his house called Boleskine on Loch Ness in Scotland for the purpose of this HGA invocation but cut it short to join in the political in-fighting that beset his order, the Golden Dawn.  It would be 5 or 6 years before he took it up again, this time using concentrated attention and visualization while walking across China with his wife and child. 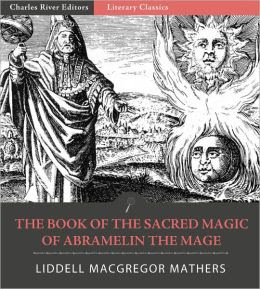 The Abra-Melin rituals involve confessions, purifications, meditations, and prayers that increase in intensity every two months.  After 6 months of this the ritual intends to culminate in union with the Angel.  This reveals a basic model that runs through the new paradigm which holds that contacting higher modalities of consciousness appears a matter of opening the doors of perception to let them in.

I deliberately used the 'doors of perception' metaphor to evoke the famous account of the same name by Aldous Huxley in which he examined the effects of mescaline.  In this essay. he advances the theory that in our ordinary state we have filters that block out other realms of consciousness.  Various practices can unblock those filters.  The Knowledge and Conversation of the Holy Guardian Angel might have something to do with those filters getting removed or greatly reduced.  You basically open yourself up to receive higher, or more refined energies through the yoga and magick practices.  The HGA (or higher brain circuits) resides with us all the time.  It thus becomes a matter of uncovering or unveiling the Angel through our work.

Most writers who broach the subject of the Knowledge and Conversation of the HGA speak of the fully realized, ecstatic, and complete union with it.  However, in my experience, one can develop a fruitful relationship with the Angel long before completely uniting with it.  I take the words 'knowledge' and 'conversation' quite simply and literally.  Knowledge begins just by hearing about it.  Later this knowledge will transform from hearsay into experience ( gnostic realization) after a few awe inspiring, mind blowing encounters with something that seems like some kind of vast active living intelligence system.  That begins the conversation.

A primary purpose of the HGA, especially in the beginning stages, is to act as a Guide.  The HGA becomes one's main spiritual guide once the Knowledge and Conversation has been solidly established.  The conversation occurs as a two way communication.  You might get or imagine you get an indication to make a particular choice or take an action.  After careful consideration you decide to act on it or not - your part of the conversation,  a communication back to the HGA regarding its advice.  More likely than not, you'll either get some kind of confirmation of a good choice or an indication of a bad one, a mistake from the point of view of the HGA, ie your True Will.  I'll give an example in a follow-up post.

The Conversation or communication from the HGA takes us to the subject of multiple levels of communication.  The basic atom or building block of these multiple levels = a pun, words or phrases that can have more than one meaning in the context they're used.  Learning to recognize puns, even if it means telling a lot of bad jokes, seems one good starting point, one useful beginning line of work.

Is it necessary to believe in supernatural entities like Angels to make this communication work?  Absolutely not.  You can simply view the HGA as a useful metaphor ... an extremely useful metaphor.  Communication with this metaphor can appear as strong and clear intuition.  Like attention, presence and will, intuition will grow, get stronger, more reliable and tangible over time.

The HGA has a language, indeed the whole of the magical Universe has a language known as Qabala.  Unsurprisingly then, Qabala has been deemed the Angelic Language as well as the Magical Alphabet.  Qabala appears fundamental to understanding magick.  Eventually, when mastered to a certain point, Qabala can show the blueprint of the Great Work on a moment to moment basis.  The understanding of Crowley's writings including his jokes and puns will increase exponentially as knowledge of Qabala grows.

The Tree of Life, the framework upon which qabalistic correspondences get sorted out, seems the ideal model for multiple levels of communication.  Viewed in its entirety, Qabala can look endlessly complicated and difficult to learn, but it's actually quite easy to begin and to see useful results in a short time.  I have a series of posts of how this lazy reporter learned and started to use Qabala beginning HERE.  Something like the next 10 posts elaborate upon the subject, and there exist various other qabalistic musings sprinkled throughout the Oz Mix archives like this one HERE.