I left this story talking about the effect the indigenous art had on me in the studio:

It got a bit unnerving at times as I would feel surrounded by nonhuman, interdimensional life forms that seemed much bigger and more vast in scope than anything I was familiar with.  Like stepping in or having a direct view of what Carlos Castaneda calls the Nagual - an observable realm outside known reality.

One day I discovered photos of some artwork on top of the rack beside the mixing desk.  Looking at them, I immediately noticed their strong resemblance to a series of paintings by E. J. Gold called City in the Sky.  It turned out to be more indigenous art submitted by a woman to lead singer Mandawuy Yunupingu for consideration.  The congruency between this woman's art and Gold's City in the Sky paintings appeared so close that it made me wonder if visionary realms were consensual and observable by others? 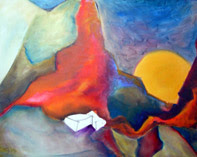 This painting by E.J. Gold has a similar feel to the City in the Sky series.
As mentioned previously, a lot of resistance met this project.  For Bill and I this reached its height  when we were threatened with jail if we didn't explain what we were doing in Australia. Apparently another producer, someone who worked with all or most of Australia's pop groups at the time, had phoned the Immigration Authorities and filed a complaint. It was true, Mushroom Records hadn't given us proper work visas. I felt nervous, but  Bill  calmly told these Feds we were only rehearsing at the studio in preparation for recording them for real back in New York. They accepted our story with very few questions and appeared even more relieved than us with this legally approved reality scenario presentation.
Not long after, we met the producer who had ratted us out.  I was surprised by Bill's equanimity towards him.  He could care less that this guy had tried to get us busted.

We recorded 6 songs with Yothu Yindi.  The music was created organically from the ground up.  Percussion tracks were recorded one at a time against a click.  Some songs had a full drum kit recorded on top of that.  Bill played bass on a couple of tracks giving them a very strong rhythmic and melodic foundation.  He also created the arrangements and song structures.

A pair of the usual suspects from Bill's New York circle of musicians, Nicky Skopelitis and Bernie Worrell, were also on hand for the proceedings.  Nicky tastefully layered 6 and 12 string guitars while Bernie added a Hammond B3 organ, piano, and his trademark clavinet through a wah wah pedal talking alien.﻿

Lyrically, the songs presented strong expressions of the Yolgnu culture with their trials and tribulations amongst the Anglo world.

Gone is the Land remembers the innocence of growing up in the bush with a strong connection to the earth, and how that changed when the colonials set up shop.

Gone is the land
to a man of the mind.
Can't you see what you've done
to me

Despite this dark theme of a way of life getting oppressed, the bridge comes in and blasts the mood into a positive, "we can do anything" dimension via a synergetic weaving of sonics, melody, energy and words:

High tide is coming in,
The pigeons call, the sharks are here.

Mabo was given an uptempo reggae treatment.  I don't fully understand the story here; many of the lyrics told in the traditional language.  Mabo seems an ancient Yolgnu legendary figure. A hero.  His spirit tells a story and he has a law:

Mabo's law is standing firm
Shedding power for us to be strong
Spirit, law, culture and all
Showing the world
See our law
﻿

The clash of cultures then gets called out again as they go into a chant:

This references some of the racist propaganda claiming that the native Australians weren't there when the Europeans first arrived.  I don't know how this wacky theory attempts to explain their presence.

Though this might look like standard socially relevant protest music, it should be remembered (from the previous post) that lead singer Mandawuy Yunupingu was bearing the brunt and right in the heat of this kind of nonsense from having been named Man of the Year.  Right wing talk radio jocks were busy inciting public hatred and organizing demonstrations against him.  In that context, these lyrics become extremely confrontational.

One piece was a completely traditional Yolgnu song with instrumentation consisting only of didgeridoo, clapstick and vocals.  Many but not all of the lyrics were in English.  It seems to be about two mysterious female travelers bringing great wisdom to the land.

Another instrumental piece became a hybrid fusion of traditional instrumentation seamlessly blending with the trademark Laswell ambient dub composing style.  The recording studio as one musical instrument in the production.

One of the most intense sessions for me, of this or of any other project, was the didjeridoo overdubs.  The Yolgnu play a specific type of didjeridoo called a yidaki particular to their tribe.

I got to this session a little early. A large, muscular Yolgnu was setting up the space where he was going to play.  Two others were standing very still to his right.  I felt an instant silent rapport with the two standing still.  There seemed no need to introduce myself, make conversation, or go into any of the other social routines that distract from pure being contact.  I felt totally comfortable with these complete strangers.  Then I saw a smallish ball of shining, radiant light about the size of a grapefruit just behind and to the right of each of the two Yolgnus standing still.  It's the one and only time I've ever seen anything like that and it didn't last that long.

The yidaki player, Bunimbur Marika still rates as the best dijeridoo player I've ever heard.  The strength and focus of his breath resonated powerfully into the rich, rolling timbre of the instrument.  The deep low frequencies pushed the air just as massively as Sly Dunbar, Jah Wobble or Bill Laswell do when playing dub/reggae style bass though a large P.A.

At one point we ran his yidaki through a subharmonic synthesizer.  The effect produced ridiculously huge low end.  We ended up not using it though,  After our run-in with the Immigration Authorities, we became a little concerned with causing neighborhood seismic worries or of distracting the flight patterns of  jets flying by overhead.

Marika wore a black leather Harley Davidson motorcycle jacket the whole time he recorded.  Someone told me he was the king.  I took it to mean king of yidaki players not king of the Yolgnu.

The final resistance to our participation with Yothu Yindi came from the label's fear based perception that the songs didn't sound commercial enough for the marketplace.  We finished by doing some good rough mixes, mixes that I still listen to this day because I like the songs and it brings back memories.  The label gave the tracks we had done to another producer who added generic synth pads and drum machine samples.  It gave the tracks a harder, brighter, more machine-like sound.  Robbed them of their soul, in my biased opinion.  Biased because I know and experienced the power of the soul those songs at one point possessed.

Diluting our contribution didn't bother me in the least. I wasn't concerned about or lusting for any particular result.  The experience proved quite extraordinarily life-changing.  I was very grateful just to be there.  I felt energized, charged and to be perceiving things in new ways.  Naturally very high seems another way to put it.  The fallout of close contact with an ancient culture for a set period of time.

Walking to the back of the line to board the plane at the airport I happened to notice an exceptionally beautiful young lady standing in line; an unreal, contemporary, fairy tale beauty like Snow White meets Princess Lea.  As fate would have it, we were seated in the same aisle of the jet with an empty seat in between.

I don't usually strike up conversations with strangers but she started spontaneously opening up to me early in the flight.  She said her name was Emma and that she taught physical fitness in Greece where she lived part of the time when not in England.   I don't remember what she was doing in Australia but she was on her way to Iceland.  Her father owned an island in Zanzibar, and she had spent time in Africa growing up.

Emma complained and lamented to me that most people only related to her physical appearance, thus her relationships felt superficial.  A classic poor little rich girl story.  It seemed obvious to me that she was looking for being contact.  I don't recall how this connected with her concerns but do remember responding by talking about John Lilly, floating ( in a floatation tank), dolphins, and the Law of Three.

Ironically (to me), the movie they screened was The Bodyguard with Kevin Costner and Whitney Houston.  It's about a former Secret Service agent hired to guard a pop star.  Surprisingly, I enjoyed it.  Whitney Houston's acting was much better than expected and even Kevin Costner was bearable.  Emma didn't like the film, she thought it was very cliché.  Whitney Houston got her professional start in the entertainment industry recording with Bill Laswell at age 16.

After we went through customs in LA, I never heard from or saw Emma again.  Some people you just work with for a brief but intense period of time before moving on.

About a week later I was getting on a flight to Europe with John Zorn and Bill to mix a Painkiller show.  I noticed that TIME magazine had an actress on its cover whose first name, Emma, was printed in large stylish letters.  I tried telling Zorn about this coincidence but only succeeded in confusing him.

Qabalistically, I connected the name Emma with the  Hebrew letter mem which corresponds with The Hanged Man of the tarot.  In some systems, The Hanged Man represents the first stage beyond ordinary personality, the first stage into the Deep Self.  Mem is also the letter that corresponds with the element Water.  The whole experience with Emma occurred in flight over the Pacific ocean.

This strange upscaling of perceiving and functioning that I took home from the Yothu Yindi encounter lasted a good 3 or 4 months.  I'm not sure that it ever went away or if I just got used to it.