Birthday - Erin and The Project

Hot off the press, published for the first time ever in our Solar System, is the latest worldwide musical pantacle from Erin and the Project, Birthday. Yesterday was the album's official release timed to coincide with the birth of the New Moon, and also with the start of Mardi Gras carnivals in New Orleans, Rio de Janerio, Quebec City, Mazatlan, Port of Spain (Trinidad) and probably a few other places too.

It's interesting to me when artists plan their release using magical principles because it indicates some awareness of the potent magical vehicle they've created. Magic in it's most basic, common sense definition - something that can cause real change to occur. 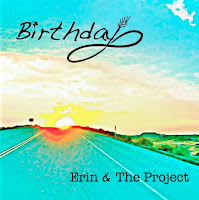 From their press release:

"First off, we just released our new album, "Birthday", and it is currently available on iTunes!! Follow the link below to preview and purchase the album.

As many of you know, we had the great honor of working with producer/engineer/mixer, Oz Fritz (Grammy Award winner: Tom Waits "Mule Variations"), on this album. The album features guitar and bass tracks by Jon Axtell (Psychofunkapus, Notorious, etc.), adding an entirely new psychedelic dimension to the solid drums, keys and vocals that you get at one of our live duo performances. We are very excited to be able to bring our new sounds to all of you listening out there!

Next on the list: We recently booked an unofficial showcase during the South By South West 2012 music festival in Austin TX!! On Saturday, March 17th @ 9:30pm, we'll be opening for Love Hate Affair at Stacks Bar located at 208 W. 4th Street!

Also, our good friends from House Band Wines (www.housebandwines.com/) are
participating in Sideways Media's "Manic Fest Destiny" FREE Day Party at SXSW on March 15th @ Rusty's on 405 E. 7th Street, and they will be supplying guests with thousands of their free music download drop cards featuring songs by multiple artists, including a track from Erin & The Project!"

As music industry insiders are aware of, the South by South West festival in Austin represents a prestigious showcase for up and coming artists, as well as presenting what's perceived as the cutting edge from more seasoned performers. It seemed quite serendipitous how the booking came about. I'm not quite sure how the booking agent first heard of Erin and the Project; he was supposed to catch their performance in San Diego but something happened and he couldn't make it. So they sent him the Birthday single which had just gone out as a preview to the Birthday EP. The agent "got it" and booked them immediately.

The core members of Erin and the Project consist of the dyadic cyclone of Paul Ezekiel and Lindsay Erin. Paul plays drums and percussion. Now, they are full time musicians but in the past, Paul was a sound engineer, former studio owner, and general contractor. He likes to build things ... out of wood, out of sound, and out of more rarefied materials. Lindsay was a student of Maestro Ali Akbar Khan ( whom I mentioned here re time dilation effects) and attended his music college. I can tell that they were close by the reverence she has for him. Lindsay is an amazing singer with a powerful soaring voice and a passionate delivery though she's also trained and adept with classical Indian vocal phrasings - that probably has a technical name but I don't know what it is. She also plays the keys.

I was as honored that they chose me to work with as they were to work with me. Daniel Lanois and others had expressed interest in working with their music, so I felt fortunate to end up with the gig. Lindsay and Paul said they got the idea to look me up when playing in Grass Valley, an audience member shouted out in-between songs, "you should record with Oz Fritz." Well, ok, now I'll confess, it was actually me in a disguise who gave that unsubliminal suggestion. You gotta get your work somehow, right? It worked didn't it?? So, I'll try it again, why not?? Birthdays are always good for making wishes: Attention, Bob Dylan, you should record with Oz Fritz.

Lindsay and Paul have the distinction of being only the second ones I'm personally aware of who have actually taken up my suggestion and dived in to the rabbit hole of Cosmic Trigger Vol. I. I've recommended it to dozens. That might hint at the archetypal nature and point of contact their music has with the deeper layers of the collected consciousness. They both appear young so I feel free to use a Jungian descriptor. What that means is that they have the breadth and depth of background in the spiritual arts to effectively transmit ecstatic, exalted, solve et coagula moods and images through their music. Anyone who appreciates Cosmic Trigger will likely key in to their music and vice versa also.

The manifestation of Birthday seemed very fortuitous. My schedule turned insanely busy last fall but somehow we found 4 days to record it onto a Pro Tools rig I brought and set up in their living room. This turned into Bear River Studios. Guitar ace Jon Axtell had a couple of days free to drive in from the Bay area and track various shades and hues of electric, acoustic, slide, synthesized, and distorted acoustic feedback guitars as well as bass. His musical instincts were spot on. He had an obvious chemistry with "the Project" evidenced by how his largely improvised parts flesh out the sound.

I will give a completely objective, unbiased review of the music at a sooner rather than later date. For now, the music is quite able to speak for itself.