Rupa and the April Fishes

Mixing in the mountains is always a beautiful place to work. Yesterday, I was delighted to be at the Wanderlust Yoga, Music and Nature festival doing the Front of House sound for my friend Rupa, and her band the April Fishes. The festival is held at the Squaw Valley ski resort near Lake Tahoe, the site of the 1960 Winter Olympics.

The weather was gorgeous, warm and sunny with an occasional mountain breeze to cool things down. I was thankful that it wasn't too windy as that can wreak havok with sound at an outdoor show. Sound, as experienced at a concert, consists of variations in the atmospheric pressure cause by the movement of air molecules by loudspeakers. Wind is also a fluctuation in atmospheric pressure that causes air molecules to move. It can counteract the intention for musical molecular alignment and propagation.

I got there early, met and conferred with the stage and PA crew over some technical issues.
Everything looked good with the stage, the backline (the various instruments and amps rented for the musicians to use) and the sound system.

After the preliminaries, I sat in the shade of the tent suspended over the Front of House mixing area facing the stage. Behind me about 100 feet was another area shaded by arched tenting where a well attended yoga class was being given.

While I was waiting, a member of the previous night headliner, Hamsa Lila, came into the mixing area and filmed a quick interview where he was asked to describe trance music. At one point he called it ' that place you go to where you just are.' He didn't do too bad of a job trying to put into words a state of cognition that goes way beyond words. I laughed silently to myself - everywhere you go, it seems people are describing their experience of the Bardo.

We held the opening slot so there wasn't much of a soundcheck. At festivals where they allow soundchecks, many of them only let you do line checks to see that everything is working, the opening act always soundchecks last as they are first up. Rupa opened with a song that introduced each band member and gave them a short solo to help me get the sound balanced at the beginning of the performance.

The current April Fish line-up is: Aaron Kiebel on drums, Safa Shokrai on the double bass,
Micha Khalikulov playing cello, Isabel Douglass on accordian, Henry Hung - trumpet, and Rupa who sings lead vocals and plays acoustic and electric guitars. All of the muiscians contribute back-up vocals. A special guest Ara Anderson was brought in as an additional trumpet player.

I've known Rupa since recording her album Este Mundo last year. Ara I've known since he was hired as a session player on Tom Waits' Alice and Blood Money albums. 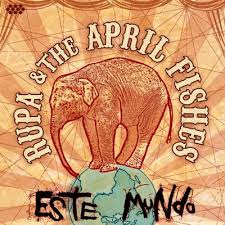 I would describe Rupa's music as World Music with a conscience. This reviewer wrote:

"Completely unclassifiable! Where the hell do you place a woman, Rupa Marya, who was born to Indian parents, brought up in France, moved to San Francisco and plays music with its heart in Southern France and Spain and has elements of Chanson, Gypsy, reggae and Kletzmer. Personally I would place her at the top of the tree because I can’t find a thing to criticise in this wonderful blend."

Rupa, also an MD, uses her music to actively support the cause of securing medical rights for illegal aliens.

One can notice in the background of Este Mundo's artwork, the appearance of projective synthetic geometry, the same kind of geometry artist Freida Harris incorporated into the design of Aleister Crowley's Thoth Tarot cards. This geometry is based on the teachings of Rudolph Steiner and Goethe.

The show went extremely well. Rupa connected with the audience immediately when she mentioned noticing all the yogis doing the "downward dog" (a yoga asana) in the parking lot.
The crowd danced and responded with much enthusiasm and appreciation for the entire show.

A highlight for me was their version of The Clash's Guns of Brixton. This song underscores the emergency nature of the current world situation. Yesterday, as it usually does, this song struck me as a wake-up call. Hearing it sung in a beautiful female voice with more subtle nuance than The Clash made the message that much more poignant.

But just to rewind for a second, while waiting for the soundcheck to commence I was reading a book a friend had sent called The Law of Undulation by Ikuro Adachi and came to this passage:

Wave energy exists in a state where it can be transmitted to and received from any point in the Universe as long as it is in resonance.

I related this to the notion that I've heard, but not yet verified, that whales are able to communicate with each other on the opposite side of the world using high frequency emissions and the principle of resonance. They are supposed to be able to transmit a sound around the world in 6 minutes.

I've often wondered if the feeling, the powerful mood and atmosphere invoked at authentic musical events, could be transmitted and broadcast around the world using a resonant system of some kind. Apply the Hermetic formula, As Above, So Below and armed with the knowledge that:
Resonance phenomena occur with all types of vibrations or waves: there is mechanical resonance, acoustic resonance, electromagnetic resonance, nuclear magnetic resonance (NMR), electron spin resonance (ESR) and resonance of quantum wave functions. Resonant systems can be used to generate vibrations of a specific frequency (e.g. musical instruments), or pick out specific frequencies from a complex vibration containing many frequencies.

it does appear possible. I've heard that material relevant to resonance reveals itself in the Rosicrucian gnosis. I continue to research and apply my findings.

My next time mixing for Rupa and the April Fishes will be September 12th at Golden Gate park in San Francisco. If you can't be there, perhaps some resonant effects of this uplifting music will drift your way, who knows?
Posted by Oz Fritz at 12:35 PM