"We must die as egos and be
born again in the swarm, not
separate and self-hypnotized, but
individual and related."
- Henry Miller, Sexus

So begins Mark Seem's introduction to Deleuze and Guattari's Anti-Oedipus - Capitalism and Schizophrenia book one.  The blurb on the back from Michel Foucault's preface calls it an "introduction to the nonfascist life."  Reporting on the 10% or so of this book I did understand, it seems, on one hand, a complex multifaceted attack on conventional psychotherapy and in particular the tendency to relate all problems back to the family either literally or figuratively using the model of the Oedipus Complex.  They contrast psychoanalysis with "schizoanalysis" which seems related to the multidimensional nature of consciousness.  Schizoanalysis seeks to remove all repressive programming from the psyche so that a person can be free to follow ones deepest inclinations, to do what thou wilt.

Destroy, destroy.  The task of schizoanalysis goes by way of destruction - a whole scouring of the unconscious, a complete curettage.  Destroy Oedipus, the illusion of the ego, the puppet of the superego, guilt, the law, castration.  It is not a matter of pious destructions, such as those performed by psychoanalysis under the benevolent neutral eye of the analyst.  For these are Hegel-style destructions, ways of conserving.

This all out attack on psychotherapy and the Oedipus model maybe doesn't seem as revolutionary as when the book was published in 1972.  Psychotherapeutic models don't appear as all encompassing and dominant in our culture as they did in the '50s, '60s, and '70s when it seem expected that everyone go through analysis.  For instance, Israel Regardie, who ended up becoming a Reichian influenced therapist, strongly recommended (in the 1970s)  some kind of psychoanalysis before undergoing initiation into the Golden Dawn.  Delueze and Guattari repudiate conventional psychotherapy with an intensity reminiscent of Aleister Crowley's war machine efforts against the stifling programming of unquestioned Christian belief and practice.  Both of them sought to empower people to shake off the shackles of external Control and programming to become free to find their own voice.  Free to engage upon the endless process of becoming, a spiritual awakening that vastly expands experience and capability.... and never stops unless you stop.  Perhaps the move away from psychotherapy in underground and esoteric circles (maybe the mainstream too??) has something to do with Anti-Oedipus?  It certainly had a strong impact in philosophical circles and it looks like it has contributed to a change in certain cultural elements.  Philosophy in its function of causing change to occur in accordance with Will.  Deleuze and Guattari hold a high regard for  pragmatic ideas. 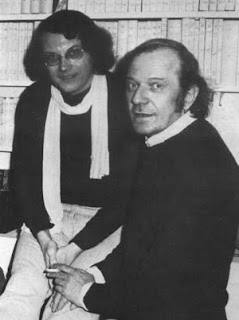 An interesting aspect of D & G's writings is that they draw from multiple disciplines and sources outside of philosophy and psychology to present their arguments - literature, theater, music, art, science, archeology, etc.  A good example of schizoanalysis in action can be seen in the recurring sections of Mary Lou Cervix's acid trip in Illuminatus! by Wilson and Shea.  These occur somewhere in the area of p.650 - 700 in the novel.

For those who read the previous blog on the war machine and magick, it appears obvious from the above quote that schizoanalysis performs a war machine task.  To be crystal clear, the war machine as we examine it in the context of magick, alchemy and transformation , has absolutely nothing to do with fighting other people on any level whatsoever.  It's about the fight to live a nonfascist life, to follow one's bliss, to start up the perpetual motion machine of endless becoming who you are, etc. etc. etc.   D & G call this "desiring-production", find out your deepest desires and produce them... do what thou wilt.

Like Wilhelm Reich, who shows up a few times in Anti-Oedipus, D & G maintain that psychological factors and the therapeutic models used to treat them strongly influences society in its economic and political manifestations, hence the references to Marx's writings and the subject of Capitalism in relation to Freud and the Oedipus Complex.

Schizoanlysis seems about going beyond limits, crossing boundaries, expanding into unknown quadrants but without any specific goal in mind.  It's nongoal orientated, or so they say.  Like John Lilly, D & G appear very careful not to program the trip though they describe an affirmative, creative philosophy of endless becoming and forging ahead omnidirectionally to make new connections.

Completing the process and not arresting it, not making it turn about in the void, not assigning it a goal.  We'll never go to far with the deterritorialization, the decoding of flows. For the new earth (" In truth, the earth will one day become a place of healing") is not to be found in the neurotic or perverse reterritorializations that arrest the process or assign it goals; it is no more behind than ahead, it coincides with the completion of the process of desiring-production, this process that is always and already complete as it proceeds, and as long as it proceeds.  It remains therefore for us to see how, effectively, simultaneously, these various tasks of schizoanalysis proceed.

What they call the process seems identical to True Will.